Most people swallow small amounts of air when eating, drinking and talking. Significant aerophagia, where so much air is swallowed into the stomach, intestines and colon that clinical symptoms arise, appears to be very unusual. This piece reflects on my experiences with aerophagia in my six-year-old son Stanley, who developed difficulties coordinating his swallow following the closure of his tracheostomy stoma. 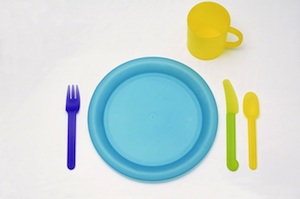 Stanley had a tracheostomy from one month old until he was two and a half. The stoma was left open after decannulation, as his airway was too narrow to risk a surgical closure. It finally sealed when he was nearly five. Soon after, Stanley began gulping and swallowing repeatedly. His abdomen became extremely distended and we realized he was swallowing air.

Regular venting of Stanley’s gastrostomy tube was not sufficient to release the amount of air that he was swallowing, which on average was about 1 liter per hour. We began having to aspirate the entire contents of his stomach to remove all the air, and then pour the stomach contents back in. There was so much air we had to do this at least once every hour. This carried on for six months while we tried to find answers to why the aerophagia had developed.

Aerophagia has been linked with anxiety, hyperventilation, mouth breathing, neurological disorders, and continuous positive airway pressure (CPAP) use. Some of the first accounts were of young soldiers who suddenly developed severe aerophagia when being shot at on the front lines. There is, however, very little research into aerophagia and no standard treatment.

Various possibilities for Stanley’s aerophagia were put forward. Some clinicians felt it had roots in a gastrointestinal difficulty, while others believed it was a neurological problem. Medication to control body movements was suggested as a possible treatment. There was also an option to put in a J-tube, so that the gastrostomy tube could be attached to a bag to continuously drain the stomach of air. Eventually, we were fortunate to begin work with a swallowing disorder research clinic and began to unravel what had happened.

In Stanley’s case, the aerophagia seems to have been related to attempts to control secretions. He was basically using the pressure of the air to try and swallow mucous. When Stanley had a tracheostomy, all secretions coughed up from his lungs were suctioned out with a machine. Following decannulation, the open stoma hole continued to serve as an exit point for secretions, and I would wipe them away as I changed the dressing. Once the stoma was closed, however, all the secretions came up into the mouth.

Before the stoma closure, Stanley had never had to coordinate the management of secretions by himself. In addition, he had also been born with a laryngeal cleft, and for the first month before it was repaired, he swallowed liquid into his lungs. Due to excess secretions, he had also been on a medication that reduced his saliva. The development of a normal swallow had therefore been prevented by a number of factors, all of which eventually combined to cause extreme aerophagia.

The treatment was to teach Stanley how to swallow. He learned how to cough up secretions, gather and control saliva in his mouth, and then swallow without swallowing any air. A key skill was to learn that we hold our breath while we swallow. This was a very difficult technique for him to grasp, as it was the opposite of what he did naturally. However, with a lot of practice he was able to master it.

An interesting development from the swallowing work was that Stanley went from being entirely tube dependent to eating and drinking everything he needs orally in the space of a few months. He had previously been tube fed for five years. Even though he had had a safe swallow for several years, he had made little progress with eating and drinking. In hindsight, I think the focus on the mechanics of his swallow, and then highly individualized therapy teaching him exactly how to swallow, at an age when he was cognitively able to understand it, was crucial in helping him learn to eat.

I think our experience suggests that while aerophagia has multiple causes, when it occurs in children with complex needs, it is important to look for links with other medical changes and to see it in the context the child’s wider swallowing development. While the link for us between the tracheostomy and the aerophagia seems clear, it would be interesting to know if aerophagia is more common in children with feeding tubes. I did speculate at one point if it might also be connected to an exploration of the sensation of swallowing and the stomach feeling full in a sort of confused, but safe way of “eating.”

What is clear, however, is that effective speech therapy is very important in some cases of aerophagia. Exploring the swallow in depth, and targeting therapy to teach correct swallowing patterns, may also be vital in helping some children with feeding tubes develop the skills and confidence they need in order to eat and drink.