We had our first trach discussion when my daughter, Charlie, was still in the NICU. For four years, I did everything I could to avoid the trach. This is the story of how and why I changed my mind.

Charlie was born not breathing and was later diagnosed with HIE (hypoxic-ischemic encephalopathy). She was only a few days old when we began to see the seriousness of her situation. Her reflexes were all absent. After several weeks she had regained some minor reflexes, but a very important one was missing: swallowing. 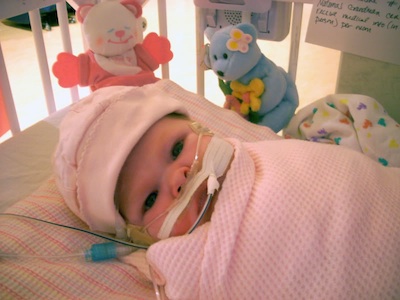 All through her 54-day NICU stay I hoped she would regain her ability to swallow, even though her doctors told us she might never learn. They told us this would impair her ability to protect her airway. We already knew she would not be able to orally feed, leading to a PEG tube placement when she was three weeks old. She managed to stay healthy on tube feeds and oral suctioning throughout her NICU stay so we decided to skip the trach. She came home in November 2007 with only a G-tube and a feeding pump, suction machine, and apnea monitor. Unfortunately, her health slowly declined from there.

Considering the seriousness of her brain injury, she was fairly stable, though. Every time she came down with pneumonia, she bounced back, only needing a three to seven day hospital stay. But the hospital stays were becoming more frequent. Soon she began having seizures again, then problems tolerating her feeds. Then her oxygen saturations were dropping.

After her first year, she went downhill fast. We were told a trach may or may not help her situation. Some doctors said it would make it easier to get the secretions out. Some doctors said it would make her more prone to infections. Every time we were admitted to the hospital, they would ask why she didn’t have a trach “yet,” as if it was inevitable, and I would be horribly offended because I thought we were doing the right thing by avoiding it. After all, no doctor had given us a good reason to get it! Every reason they gave us was iffy at best, and there were always downsides to it: possibility for trach infections, more care, more equipment, more upper respiratory infections, lesser quality of life due to being less mobile from the extra equipment, etc. I clutched onto those reasons like a life raft. We weren’t going to do the trach!

At 18 months she ended up on hospice. They said there was nothing else they could do…everything in her body was failing. And it wasn’t as simple as putting in a trach. Everything was going haywire. So we brought her home and loaded her up on oxycodone…and she got better. 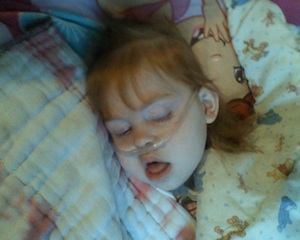 Yeah that’s what WE said! We kept giving her the oxycodone. What else could we do? So my baby lived on three liters of oxygen, round-the-clock oxycodone, and lots of love for the next three years of her life. It wasn’t easy but we didn’t know what else to do. We didn’t know what was wrong with her. Neither did the doctors.

Over those three years we pieced things together. Thanks to one very knowledgeable and dedicated doctor on her team, we had a diagnosis: Dysautonomia. Normally this isn’t a difficult diagnosis to make. I think Charlie presented strangely, making her doctors not catch it earlier. One of her more prominent symptoms was convulsions and those don’t really fit into the puzzle. But everything else fit. We still didn’t know WHY she had all these problems though.

In the fall of 2011, Charlie came down with two bugs simultaneously that landed her in the PICU. My child with severe quadriplegia cerebral palsy had never needed anything above high flow oxygen to get her through an illness before, which was another reason I claimed she didn’t need a trach. She was too strong to need a trach, right? But here she was in the PICU with BiPAP on. And she was resting SO comfortably.

On day five it hit me. She had not had one of her typical autonomic symptoms the whole time she’d been on BiPAP. Could it be this simple? Could some extra respiratory support fix my baby?

I asked the PICU doctor but he really didn’t know. I scheduled appointments with all of her other doctors who might know. Each of them agreed it might be connected but they couldn’t say for sure.

Charlie’s autonomic symptoms are well controlled now and she is off the oxycodone. She is 6 1/2 years old and has had the trach for two years now. She is positively thriving! Does this mean all kids like her will benefit? Of course not! But here is what I’ve learned: 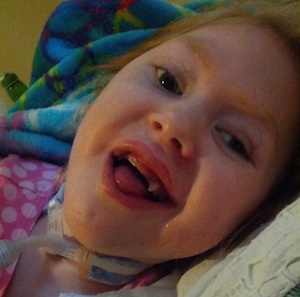 When considering the trach, you have to look at more than just the respiratory status of your child. You have to look at his or her health as a whole system working together. A trach can affect more than just their breathing, both in good and bad ways (in our case, mostly good!). Take everything into consideration, but also try to imagine all the good things that could come from it that the doctors may not have mentioned because they just don’t know. They don’t see the little bits of progress afterwards, and even if they do…they may not connect progress to the trach. To them, it may seem coincidental. But as parents, we know when our children benefit from a procedure directly, even if it isn’t on the list of “official benefits.”

The trach really isn’t as scary as we imagine it to be. Really! We have to learn everything about our child’s care…this is just one more thing. It seems scarier because it is the airway, but given enough time and practice, you become a pro. Don’t feel like a pro yet? Tell them you need more time before discharge! Ask for more help! I promise they won’t send home a struggling parent. Take your time and know that you will get the hang of it, just like everything else.

We do have to use the ventilator for Charlie sometimes while out and about. It comes in a nifty little bag and it just hangs on the back of her wheelchair. You can plug it in anywhere. It’s really not a big deal. Most kids won’t need a ventilator, but for those who do, it will not prevent you from doing things as a family. I was SO worried about the ventilator. But it’s not so scary once you get used to it.

The trach is just one more thing to accessorize. I’ve made cute cloth trach pads and trach ties. Why not have fun with it?

It’s really nice that she doesn’t have sores under her nose and around her ears from the nasal cannula all the time now. Really, sometimes I think that is the best part about the trach. I hated that stupid oxygen tubing gunking up her beautiful face!