Operation Transformation:
Kidney Transplant in a Child Who is Medically Complex

My daughter Colleen has a rare syndrome called Joubert Syndrome, which is a genetic syndrome that causes brain abnormalities, low muscle tone, and developmental or intellectual disabilities. It can also cause other conditions, and in my daughter’s case, it caused her kidneys to fail. This is the story of how she was able to receive a kidney transplant, despite her other medical and developmental complications. 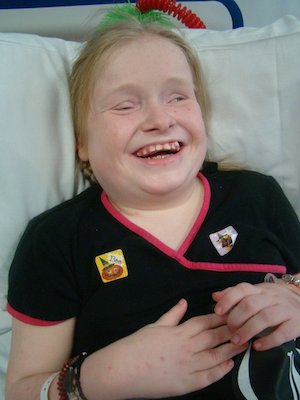 My daughter Colleen was born at 37 weeks gestation, weighing a respectable 6lb 8oz. We had been expecting complications as prenatal ultrasounds had indicated Joubert Syndrome. Doctors had painted a bleak picture for us. In a way we were lucky, as the diagnosis at 28 weeks gave us plenty of time to research and absorb. The hospital also gave us a tour of the Neonatal Intensive Care Unit and explained all the tubes, machines and wires that she might be hooked up to. It meant that we were prepared.

Colleen was born with 53% kidney function. We had been told to expect her kidney function to deteriorate as she got older, and, if still functioning at puberty, the rate of failure would accelerate greatly then. This was almost prophetic, as this is exactly what happened!

Colleen was always on a special diet and had to have specific amounts of fluids until her kidneys finally failed. Once kidney failure set in, the real “fun” began…the restrictions! She was only allowed to have 700 mls of fluid a day, which included the fluid used to make sauces, yogurts, and even solid foods. She was on a low salt, low potassium diet, which meant no tomato-based products. She missed her baked beans.

Like many children with severe kidney disease, Colleen struggled with blood pressure problems. Even on Peritoneal Dialysis and a cocktail of tablets, her blood pressure just couldn’t be controlled. Doctors suggested removing both kidneys, because even though they had stopped functioning, they were still producing a product called Renin, and this could cause blood pressure problems. The surgery did help bring down her levels. Thankfully, hospital stays became less frequent after this!

Once her kidneys were failing and removed, she became a potential candidate for transplant. Even before being put on the transplant list, we had a lot of work to do to prepare Colleen for transplant. Dental care is a BIG part of this, making sure gums and teeth are as healthy as possible. Also vaccinations must be up to date.

Meeting the transplant team was not entirely as I expected. I found the appointment a bit upsetting, as the doctor discussed Colleen’s special needs and asked if it would be ethical to put her through such an enormous operation when she wouldn’t understand what was going on. I argued that the benefits of surgery would far outweigh the “ethics” of it all. Without surgery Colleen was being sentenced to death, and whilst her life might not be as full as her “normal” peers, it was her life and she was a happy teenager who had the same zest for life as any of us. She lived for her pink iPod and its contents just like any other teenager! Fortunately, the transplant team came around. After that it was all systems go.

We got that magic phone call at 1:20am, and even though I had played that call over in my mind hundreds of times, I was like a headless chicken, running up and down the hall throwing things into a bag, contacting immediate family and finally racing to the hospital. In our case, this was our first time dealing with the hospital, as her surgery was at a different hospital than the hospital that had cared for her from birth. The staff was very excited and made us feel very welcome, but they weren’t quite prepared for the battle Colleen would put up having her blood taken. And boy did they need a LOT of blood! Naively I thought she would be rushed to surgery and job done. The blood had to be tested for final matching, which took FIVE hours!!!!! Longest wait of our lives.

Thankfully at 9am we were given the thumbs up. Surgery took four hours and the new kidney produced urine straight away (some kidneys can stay “asleep” for a while and may require another trip to surgery). Due to her additional needs, Colleen stayed in intensive care for six days. They kept her heavily sedated for the first few days as a pain management strategy due to her habit of pulling out cannulas, drains, and other medical devices.

On her first day back on the transplant unit she was given sausages and beans for tea, followed by some chocolate, for the first time in four years. She was beyond excited, and it was actually a very emotional moment for me.

We got home after 12 days, and life was hectic. The first weeks required us to attend the hospital three times a week for labs to ensure she was on the right dose of anti-rejection drugs. Again, due to her absolute fear of blood draws, this proved a nightmare for us. She fights like a bull! Her doctors decided the best course of action was to put in a catheter for a couple of months to ensure we got the blood draws as required, and this made subsequent trips so much easier.

Life without fluid restrictions, food bans and dialysis became the norm, and it was wonderful! We call the transplant our Operation Transformation, as it not only transformed Colleen’s life, but that of the entire family unit. We could now make plans and have nights out.

Four years on, Colleen still remains very healthy, and labs are down to every three months now. She has had a few infections, but thankfully no rejection episodes. But we always live with the fear that any temperature spike could result in something serious and ultimate rejection.

We are pedantic over her meds and make sure she gets them at 10am and 10pm every day. This regime will continue for life. Doctors say that because we are in charge of this they are confident it is helping. In normal circumstances, they usually see problems when patients reach young adulthood, as they can get careless with their medication regimes.

Would I recommend a transplant to a parent of a child with additional needs? Absolutely! It is only now when we see the energy and rosy cheeks Colleen has that we look back at pre-transplant photos and realize how poorly she really was. She NOW has the life she deserves and so do we as a family.

I thank the donor family regularly. Writing our anonymous letter to the family was the hardest letter I have ever done. How do you thank someone for saving your child’s life in the knowledge that they lost a loved one to enable this?

Kidney failure is a scary diagnosis to receive but it could be worse. Dialysis is a wonderful invention and it works whilst waiting on that magic phone call. To those of you waiting, never lose faith; it WILL be worth the wait!

Tina is from Ireland, is married to Bob, and has two children: Amy, age 22, and Colleen, 19. Colleen has a genetic syndrome called Joubert Syndrome.