Teaching a child to communicate can be very difficult, especially if your child has a complex medical condition. But with persistence, most children can find a method of communication. This is the story of how my daughter learned to sign. 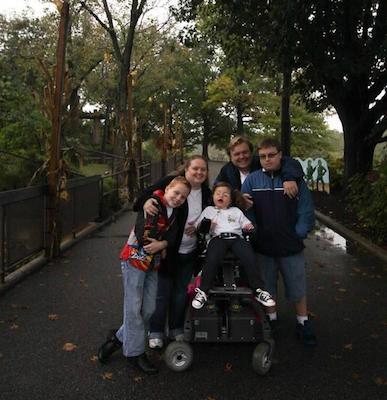 Jerrica Nichole came into our family when she was nine months old. She came home with a trach, a ventilator, feeding tube, and was profoundly hypotonic. She could not sit, crawl, speak, or tolerate any changes in textures. I had been her nurse in the hospital and had fallen in love with her. When her parents abandoned her, my husband and I took custody and brought her home as part of our family.

Over the next six months, we discovered that she was also moderately hearing impaired and had a processing disorder. Her brain did not know how to process the signals her ears sent when sound happened. In effect, she could not hear or understand any of the sounds around her. We sought help from our early intervention team and she was assigned a Deaf/Hard of Hearing Interventionist. We learned that we had to teach Jerrica what sound was in addition to teaching her how to communicate to the world. We quickly realized that we would need to teach her to use sign language. It seemed unlikely that she would ever speak and she would need a way to communicate.

Finding a Method of Communication

Although we tried many communication devices, we couldn’t get any to work well since Jerrica was so profoundly weak. She had intelligence and a spark in her eyes that always made me feel as though she was trapped in her mind just looking for a way out. We all started watching Signing Times videos and learning to sign so that we would be able to communicate with her.

The biggest problem was that Jerrica just could not seem to understand what we were trying to do. We tried teaching the sign for “more,” but she rarely wanted more of anything. She was not fed by mouth at all, so using food as they do with other children was not an option. There was no chance to give her a Cheerio and then get her to sign “more” for more Cheerios and get through to her that way. We realized we needed to find something she wanted badly enough to motivate her to use a sign. We tried all sorts of things but just could not seem to get that “ah ha” moment.

An “ah ha” moment is when that light bulb goes off and suddenly the child understands. It’s that moment like Helen Keller and the water well when she feels water and her teacher signs water in her hand. Suddenly she just has a breakthrough and understands why the water she feels and what is being signed in her hand go together.

For Jerrica, we struggled for weeks on end trying everything we could think of with our therapist telling us that it would happen eventually if we just kept trying. Then one afternoon it just happened. We were using Jerrica’s small portable speaker system and an iPod with music. She loved to listen to music with a good beat. We would start a song she liked, then pause it. We signed “more” and then would restart it.

I have two older children and I can say with certainty that Jerrica’s first “word” was much more memorable and had a significantly larger impact on me than my boys’ first words did. I remember that she was so excited to keep telling us “more,” and I remember thinking I wasn’t sure who was more excited, Jerrica or me!

It was like the floodgates opened. She started signing “more” and then seemed to understand that we were trying to help her communicate. Over the next two weeks, she learned six signs. More, Mommy, Daddy, yes, ball, and music all came in the blink of an eye.

Finding that one special thing for each child is different. For us it was music, but for others it’s a special toy or stuffed animal or even a food for those who can eat. The important thing is getting that “ah ha” moment to happen. Once it does then it seems like the rest of the journey is faster and easier from there. You even find yourself looking up new signs because the child is learning them faster than you are.

Jerrica is now six years old and was recently diagnosed with Congenital Myasthenic Syndrome. Despite ear tubes and nerve problems, she is able to hear fairly well, as her hearing is only mildly to moderately impaired. Nonetheless, she is still unable to communicate by any other way than sign language.

She knows about 500 signs now, and although we speak and sign to her, she signs her response. It does limit her world since not everyone can sign, but we are fortunate to have a school with special classes for Deaf/Hard of Hearing children, and most of the regular teachers there can sign, as can many of her regular hearing classmates.

She may never speak but she does very well at making herself heard. Although she is limited in her ability to communicate with the world outside of sign language, it remains her best way of expressing herself. Without signing, she would still be trapped inside her own mind and that would be a tragedy. Sign language, for our little girl, was a way out of the captivity in her own mind.

Barbara McClaren lives in Louisville KY and is married to Michael. They have three children, Branden (19), Matthew (13) and Jerrica, who is 6. Barbara has a Bachelors degree in Nursing and has been a pediatric nurse for 13 years, 11 of which were in PICU units at top children’s hospitals on the east coast. She now works full time as a nurse/educator at a local home health company.