Communication is the foundation to any relationship, but it is not always easy. My eight-year-old has had a long, hard road in learning to speak. There were honestly days I thought I might never hear her say, “I love you Mommy.” We tried speech therapy, iPod touch with speech output programs on it, sign language and more hours of speech therapy. However, she barely spoke more than twenty or so words at almost age five. She did appear to understand most of what was going on around her and followed classroom procedures pretty well. 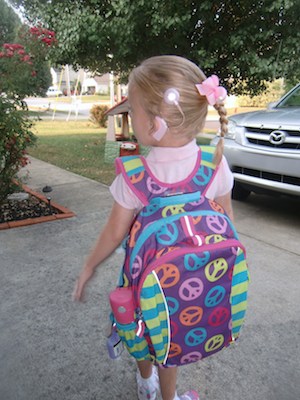 At an ear, nose and throat appointment right before my daughter turned five, we expressed our concerns with her hearing. The doctor tried to brush us off, reminding us that she had many medical and physical delays that could be causing her speech delays. Then, he finally heard our plea and lined up some hearing testing. Two months after she turned five, we were given the diagnosis of severe to profound deafness in both ears.

It was a hard diagnosis at first, but we quickly became excited knowing that there were new things to try to help her speak. I still longed to hear those precious words. We were asked if we wanted to go the sign language route or verbal route. We took time to research and look into what that would mean, and in the end chose to take her the verbal route.

She was quickly outfitted with pretty pink hearing aids, and we increased speech services and changed her whole IEP to help her succeed in a new classroom environment. Part of that IEP change was holding her back for another year of pre-kindergarten. She was placed in an amazing blended classroom full of children with special needs and some without special needs. They lined up a hearing teacher and speech teacher to help her regular classroom teachers with tailoring her assignments to her needs.

The day before school started, she received her first pair of hearing aids. The look on her face when she started to hear noises and sounds was complete shock. Any loud noise for weeks scared her and made her cry. We realized that she really had not heard much. No one is sure when or why she lost her hearing.

Fast forward two years, and Emma is doing well in her speech. She is finally mostly caught up to her peers in language. She even had a solo speaking part in a recent school choir show. Yes, she sings in a performance choir. She struggles to learn the words to the songs, but she loves it! We view it as extra speech practice and a way for her to work on her clarity of speech.

This past summer we did implant a cochlear device in one of her ears. She had become nonresponsive using her hearing aid in that ear. Now, she is learning to comprehend speech through her new hearing device. She proudly sports a new purple and hot pink hearing aid and a princess pink cochlear implant. She is proud of her devices, and despite some not understanding her speech, she does not let that stop her from loving life.

The journey to hear those precious words “I love you” was hard, frustrating and tiring. However, now she gets in the car and not only says, “I missed you, mom,” but tells me about her day. Two years ago that was not possible at all. I had to rely on her teacher’s notes.

Do not give up, keep trying and find what works for your child. There is so much technology and so many choices for therapy! Don’t give up!! The journey to communicate is not the same for each person.

Rachel Zook is a stay at home mom with two kids: Emma, eight, is medically complicated, physically delayed, and hearing impaired; and Taylor is an energetic three-year-old little boy. She loves crafting, reading and spending time with her kids and husband. You will find them often enjoying fun outings to local museums and parks exploring and having fun!