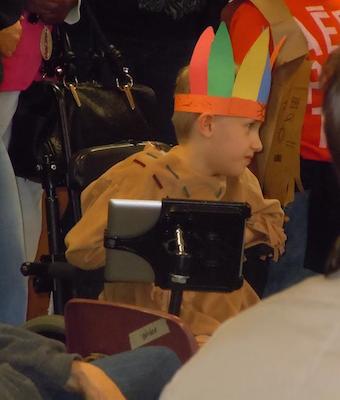 She started laughing and said the following, “Telepathic communication doesn’t count in the communication world, Melissa. Communication is a two way street. Not just you inferring your son’s wants and wishes, but also your son becoming an active participant in his own communication needs.”

I wanted to share this story to let others know how deeply connected the relationship is between children who are nonverbal and their parents. Plus, I wanted to let everyone know how important it is for children to find a way to become active participants in communicating their needs. The fact is when a child is one or two years old and says her first words, it is a “call your grandma” moment, but if your child is four, five, or six years (or older) like my son when he first learned to communicate (verbally or otherwise), it is a “take away your breath moment.” It is product of a whole lot of work and the investment of every member of their family to bridge a connection between your two worlds. It is monumental.

I can tell you from personal experience that the relationship between a child who is nonverbal and his or her parent is a relationship that supersedes words. I know it isn’t exactly telepathic, but it almost seems that way. You become an expert on interpreting that cry, that bodily movement, that facial expression. Only a parent with a child who struggles with communication needs would understand how in tune you become with your little one’s needs. It is an almost symbiotic relationship.

The fact is to meet your child’s needs effectively you have no option but to develop this kind of deep relationship. However, your child’s mere presence—everything that encompasses who your child is—projects and adds something beautiful into your world. That something is bigger than words. That is what your little one gives back to you as a parent. This is the relationship between a child who is nonverbal and his or her family.

On the other hand, only a parent of little one who is nonverbal would understand the desire and almost desperation to know what your child is thinking. To hear the words, “I love you.” The need for him to share what hurts when he is sick.

We found with my son that the more forms of communication that I provided, the more it facilitated verbal communication…not the opposite. If anything, communication aids, augmented communication, and assistive technology facilitated his desire to communicate verbally. It gave him a voice until he was able to articulate his thoughts well enough to be understood by others.

We found augmented communication actually encouraged that desire to communicate verbally because it showed him that communication held importance. It got Noah what he wanted or needed faster. It decreased immature behaviors like crying he previously used to obtain his needs.

I think another misconception involving augmented communication is that committing to this form of communication will limit your child to augmentative communication forever. Initially it sounds so permanent and inflexible. It turns out that using a communication device does not necessarily mean that you are giving up on verbal speech. It is just giving your a child an opportunity to express her needs. It is meeting your child where she is communication-wise at that particular moment.

We started the process of communicating with a device at age three, first a Springboard Lite and supplemental picture cards. From age four through six we moved to sign language. Then we moved to another device, a Dynavox communication device, from age five to seven. As technology increased, he was able to transition to a communication app, Proloquo, on an iPad for several years. Today, he is able to communicate verbally with articulation issues, with assistance from his iPad if needed. Noah is now able to crack jokes, ask questions, read stories, and express needs both verbally and with augmented communication.

Before I ever began the process of verbally communication, I gave Noah the opportunity to make choices. First, we used concrete choices and then moved to Picture Exchange Cards (PECS). Finally, we used a device.

I think another misconception is that augmented communication has to always be technology driven. Most children start out simply and move towards a more complex form of technology that meets their child’s communication needs.

Always start with concrete choices that hold value to your child. This, of course, varies from child to child. In the beginning, my boys liked videos and books. Also, always introduce augmented communication in the environment your child feels the most comfortable, such as his room or classroom. Here is a sample of how we started, using actual books and videos: “Do you want to watch this video or read a book?” Child picks book. “OK, you want a book? Do you want The Hungry Caterpillar or Brown Bear, Brown Bear?” We moved from concrete examples (the actual books) to pictures of objects using PEC cards.

In the beginning, if he looked in the direction of the book/card, it was confirmation of his decision. Over time, we moved to pointing when his fine motor/finger control improved. We moved to pointing at cards instead of the actual objects. You can’t carry large objects with you everywhere. Cards were more mobile than objects. We used Velcro to put our cards into books. Then, we found the books cumbersome so we moved to a device.

Some topics you can use include:

Over time, we moved from two choices to many choices. Noah’s first device was a beginner device with few choices and a long wait time. However, Noah soon outgrew that device and wanted to share things that his particular device wasn’t able to do, like type words. He then required a more advanced device.

Always pair verbal communication with augmented communication to encourage verbal approximations and future verbal communication. Become familiar with their device (whatever it is) because if you don’t feel comfortable using the device, your child won’t, and he may not use it. That may require sitting down with a company representative or taking a class.

By observation, we noted that Noah always gravitated to his iPad. He loved playing games on it and navigated well on the web. We finally relented and provided all his communication needs on his iPad. Today, he carries his iPad to all his classes at school. For assistive technology to work, it should be included throughout the day. Noah uses his iPad to complete assignments and communicate his needs throughout his whole school day. He is able to do everything that his classmates do using the iPad.

There are many options available for augmentative communication. Here are some of the most popular:

Listen to Your Child

Overall, Noah guided his own communication needs. As the evaluator stated, he was determining his own communication path. When he signed, he was the one indicating the desire to sign. When he found sign to be too slow and gravitated to the iPad, he determined that he wanted to communicate in another method. I was losing the active participant role in interpreting his needs and he was finding his voice, even though that voice was not being communicated verbally at that time. Today, he does communicate verbally. He has gravitated to another method that fits where he is at this moment, verbal communication.

I encourage all parents of children who are nonverbal to seek out a form a communication that meets your child’s needs. Go for an augmentative communication evaluation. Find what ways your child communicates best. Don’t give up quickly with implementing that method, because many times, augmented communication takes time and a willingness to be flexible. It is a marathon, not a sprint. If your child doesn’t succeed on the first attempt, keep trying.

Also, remember that you can do this. The future is limitless with assistive technology, and someday your son may be like mine, the narrator in his second grade play, without speaking a word verbally.