The Path to Communication

My daughter Grace has complex communication needs. We used to call this “non-verbal,” but that old term should really have been “non-spoken words.” Grace uses sounds, gestures, sign language and behavior to communicate with the world. In her own way, she is verbal. I know because sometimes she is so verbal with sounds, singing, crying or other sounds of frustration that come from her mouth. 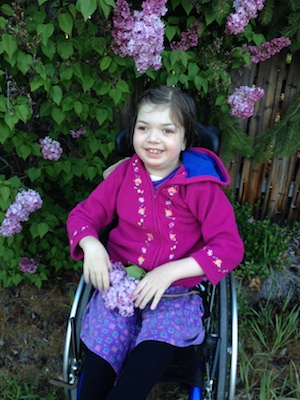 We have not yet found a perfect system for Grace. In this article, I will discuss some of the options we have tried, and how we use multiple options to support her abilities.

For the last year and a half, I have been trying to interest Grace with PODD, Pragmatic Organization Dynamic Display. PODD is simply a system of organizing vocabulary in logical, predictable ways. I have tried many different versions of this low-tech system. My newest version removes the visual component and emphasizes the audible piece. I’m hoping that with routine modeling of consistent and predictable vocabulary, Grace will learn to communicate with PODD. For more information about PODD, check out www.lburkhart.com or Spectronics of Australia websites.

In my gut I just know PODD will be the way Grace will be able to say what she wants, when she wants, wherever she is (a slogan of the PODD system). I went to a PODD training with Linda Burkhart and she said it can take 15 minutes to four years for a child to learn to use PODD independently. That may sound like a long time, but what other choice does Grace have? It’s already been nine years of communication without words. What’s another 15 minutes to four years?

Try as I might with PODD, sometimes pressing circumstances dictate the need for an alternative communication method. Grace has been potty training on a schedule for almost a year. Now, we really want Grace to learn to indicate when she needs to use the bathroom. Despite Grace’s limited fine motor ability, she can snap her fingers very well. So, we’ve started snapping our fingers to indicate “potty-time” in the hopes that eventually Grace will make the connection, and one day, she’ll snap her fingers because she wants to use the bathroom. She could use PODD to say she needs to go to the bathroom, but since she hasn’t caught on to it yet, I needed another approach.

PODD will probably be one of many ways Grace learns to communicate. In fact, Grace already is a multi-modal communication speaker. She gets her immediate needs met regularly with her sounds and behavior and some sign language. And because these things are met, she hasn’t had an intrinsic need to learn a more functional system with symbols or words.

We have also used big mac buttons, smaller buttons, talking photo books, homemade buttons, the iPad, and more. Most of these are voice output devices that Grace just likes to hit for the cause and effect function they offer versus a communication device.

We had fun with a step-by-step button last school year when Grace took a spill in her wheelchair and scraped up her face at home in her driveway. We decided to send her to school with a “tall-tale” about her scraped up face. With Grace’s help we recorded a story using her sister’s voice on the device. The story was created by first offering Grace choices. For each part of the story, we gave her two options. For example, I said, “Grace saved a dog” or “Grace saved a cat.” Grace patted her chest, meaning “yes” when I said the cat. Then I gave her the choice of “hitting a tree” or “falling in a lake” in her story. Grace indicated the tree version by laughing for that one. We sent the button to school with Grace, and when anyone asked her what had happened to her face, the button was brought out in front of Grace. She could push it, telling her story in bits and pieces by pushing the button repeatedly. She liked the interaction the story gave her with her peers and teachers.

Grace communicates a little differently at home and at school. Her school speech therapist and I both filled in the Communication Matrix, a wonderful tool to help me understand Grace’s communication level. You can learn more about it at www.communicationmatrix.org.

Grace’s school SLP and I found Grace at different levels of communication, which seems to be a common occurrence. I account for this discrepancy because I spend 24/7 with Grace when she is not in school, and her SLP spends short bursts of 20 minutes of time with her, here and there during the week. Grace needs so much time to process what she sees and hears, and I can give that to her at home. School does try to give her the needed processing time but it is not the same. 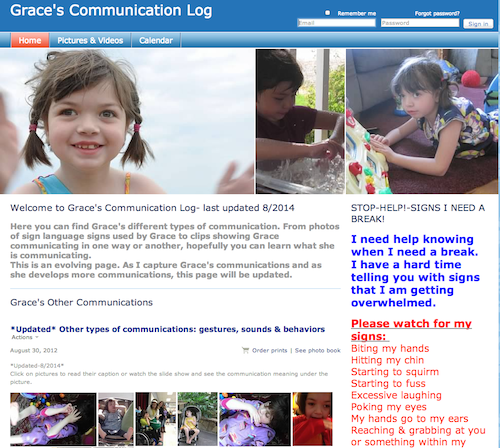 To help Grace’s school staff, her therapists, other family and friends understand Grace’s numerous ways of communicating, I built a website called Grace’s Communication Log. It has also come in very handy to catalog Grace’s numerous signs, gestures and other communications. With all that I do for Grace, keeping the site up-to-date has not been a priority, but I did give it a good update lately in anticipation of the new school year approaching. It’s great to see the development of Grace’s communication in one place.

Communication for Grace involves not only her ability to communicate, but also for those who are with her to understand all the different ways she communicates. We all need to be able to “read” Grace. Grace’s versions of sign language, her gestures, and her behaviors are all means of communication that are dependent on others’ interpretation. Having a communication log helps everyone get on the same page for Grace.

In addition, an important piece of communication I don’t want to forget to talk about is the language of love. Grace has never said, “I love you, mom,” nor “mom” for that matter. I know she loves me because she will look at me putting her to bed, saying, “cuh, cuh, cuh,” until I snuggle up with her, and then give her a kiss. Sometimes, she will reach her hand out and place it on my arm, just to let it sit there. Occasionally, she grabs on to my fingers and holds them, asking for nothing in return. In therapy, when I’m watching, she constantly references me by looking towards me as she does her work. In the morning when I go in to get her out of bed, she always has a smile for me. Just like two people in love who speak different languages, love has a universal language all of its own.

Would I love to hear Grace communicate the words, “I love you?” Sure, but for now simple sounds and gestures are enough.

Grace’s future still involves finding a mode of functional communication that the world at large can understand. It may be PODD, an iPad app, or an Augmentative Communication Device. The world is Grace’s oyster and I’ll do everything I can to help her interact with it. My wish for her is that she will one day be able to say what she wants, when she wants, wherever she is.

Krista is mother to three children, two with special needs. Among therapies, doctor appointments, school, plays, and baseball games, she likes to write and has published a few small things. She is working on creating a website and book about being the expert on your own child with special needs. She hopes to launch sometime next year.