How Do Parents Feel About Feeding Tubes?

When my daughter was first born, I really disliked her feeding tube. She had a nasogastric (NG) tube that I had to stick down her nose every few days, usually because she vomited it out of place, while she writhed and cried. By the time she had a gastrostomy (G) tube placed, I felt more neutral to the tube, and by her first birthday, I couldn’t imagine life without it.

I was curious whether my experience, and my gradual acceptance and growing love for the tube, was the norm. We conducted a simple seven-question survey of parents and guardians of children with feeding tubes, recruiting families through Facebook groups, and received more than 500 completed surveys.

We had 511 complete surveys at the time the survey was ended. Of these, the vast majority came from families with children between ages one and twelve, with a smaller number of babies and teenagers. The chart below illustrates the age groups represented in the survey, separated in standard infant, toddler, preschool, school age, and teenage groupings. 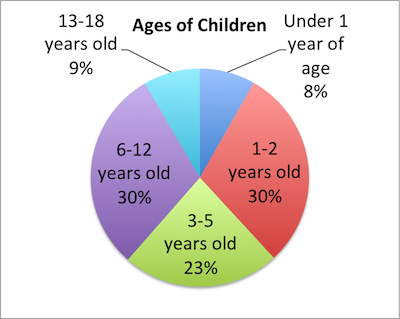 We also asked parents/guardians what type of feeding tube (or tubes) their children had currently. The vast majority of participants, 76%, had a G-tube. Children with gastrojejunal, gastroduodenal, or transjejunal (GJ. GD, and TJ) tubes comprised the next largest group, at 14%. 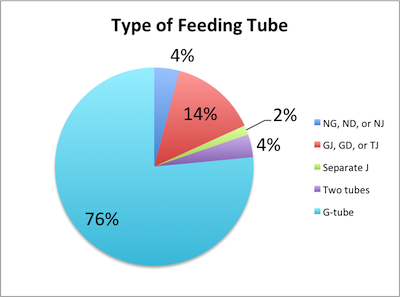 Interestingly, almost half the children represented in the study (249 children or 49%) took nothing by mouth or only had tastes. The remaining half of children took varying amounts by mouth, with most taking either very small amounts (1-25% of intake) or very large amounts (76-100% of intake).

Overall Feelings of All Parents/Guardians

Overall, parents really liked their children’s feeding tubes. 301 parents (59%) either liked or loved the feeding tube, and 314 (61%) felt positive toward the tube. Only 11% disliked or hated the tube, and 10% felt negative toward it. 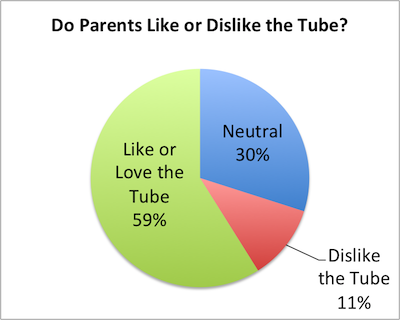 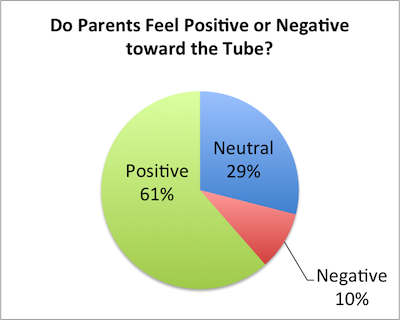 A little over a third professed having a love/hate relationship with the tube. While they loved the results of the feeding tube, they would still prefer not to have it. 190 parents/guardians (37%) recognized it improved their child’s health or life, but they expressed that they would like to get rid of the tube.

The Impact of Age

The single most important factor in predicting whether or not a parent/guardian felt positively toward the tube was the age of the child. The younger the child, the more likely the parent/guardian disliked the tube, felt negatively toward it, or professed a desire to try anything to get rid of it. Parents and guardians of older children were much more positive, realistic, and accepting of their children’s feeding tube. 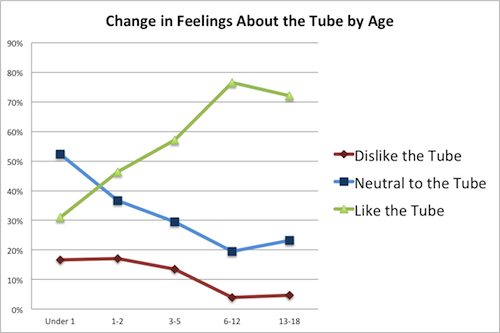 Most likely, parents of babies are struggling with accepting their child’s condition and need for a feeding tube. As they have the tube for a longer period of time, they begin to not only accept the tube, but also see that it improves their child’s life and health, leading to more positive feelings toward the tube and tube feeding in general.

Similarly, parents over time changed their opinions about wanting to get rid of the tube. 71% of parents with babies would like to get rid of the tube, but this percentage dropped to 19% percent in parents of teens. Of course, parents of older children are more likely to have children with an ongoing medical condition requiring long term feeding tube use, and may be more realistic about their child’s continuing need for the tube. 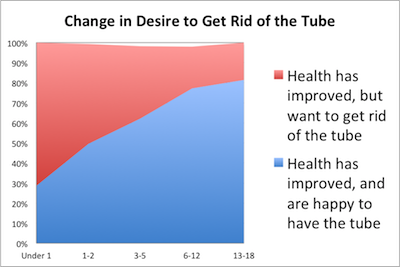 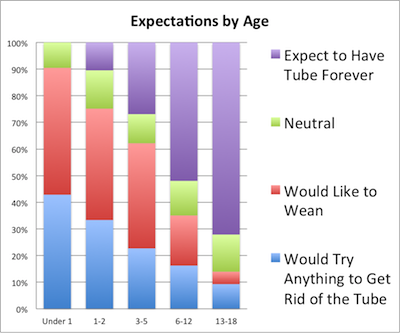 The Impact of Tube Type

Tube type had little impact on parental feelings about feeding tubes with one major exception: parents of children with any type of nasal tube (NG, ND, or NJ) were much more likely to dislike the tube, have negative feelings toward it, or want to get rid of it. Not one parent/guardian of a child with a nasal tube liked or loved it. To some extent, this is also related to age, because 81% of children with nasal tubes were under the age of two. Parents of children with separate J tubes, regardless of the age of the child, also tended to dislike their child’s tube more than average. 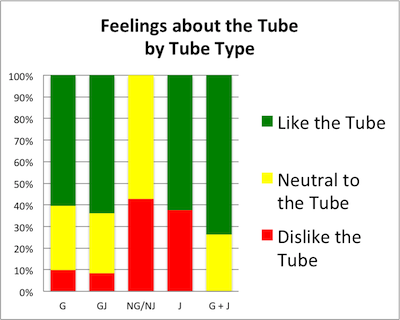 Similarly, parents of children with nasal tubes (NG, ND, or NJ) were the least likely to say they were happy to have the tube, with 76% professing that they wanted to get rid of the tube. Considering 60-74% of parents/guardians of children with any other tube type were happy with the tube, the nasal tubes again seem to be the most despised tubes. Because the tubes are visibly placed on the face and are difficult to insert and keep in place, parents and guardians clearly do not prefer these tubes. 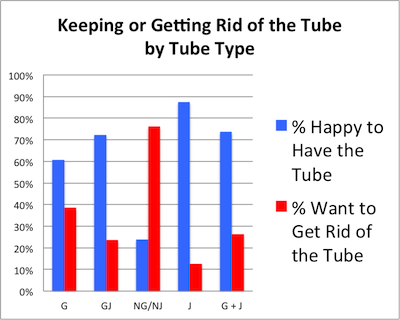 What Did We Learn?

This brief study illustrated several important points about parent/guardians and their feelings toward their children’s feeding tubes. These include:

Thank you to Feeding Tube Awareness Foundation for helping to recruit parents/guardians for this survey.