by Laura B. Martin

We were thrust into the world of prematurity when our twin boys arrived at 24 weeks gestation after a mere seven hours of labor. Campbell could not survive his extreme complications from prematurity and passed away after 23 days of life. Joseph spent a tumultuous 228 days in the Neonatal ICU before coming home for the first time.

We were a few days into our NICU journey when we learned of Necrotizing Enterocolitis (NEC). We learned that NEC often strikes quickly and without warning in premature infants. NEC causes intestines to become gangrenous without any known cause. Some survive, but many do not. Some are treated surgically, and some are treated with antibiotics or a combination of the two. Some are left with no side effects, and some are left completely IV dependent with very little functional bowel. It is a horrific infection.

This is the story of Joseph’s battle with NEC, which occurred much later than usual, and its impact on his life.

So Close to Home

When we learned of NEC, we were told that once we reached Joseph’s due date, we could cross it off our list of things to worry about. We were told that rarely, if ever, does it occur after a baby reaches 40 weeks gestation. When we finally reached Joseph’s due date, my husband, Scott, and I breathed a collective sigh of relief that Joseph had been spared a run-in with NEC.

Five and a half months after Joseph’s birth and eight weeks past his due date, we were finally within days of discharge. We were so close to bringing Joseph home that we could taste it. The crib was set up, all of his clothes were washed, we had been trained on how to change his gastrostomy tube (G-tube), oxygen tanks had been delivered, paperwork had been completed to be out of work for “maternity” leave. We were bringing our survivor twin home!

Four days before discharge, it became apparent that Joseph was getting sick. He started having diarrhea, but it was attributed to the rotavirus vaccine he received two days prior and a change in formula. He had an elevated heart rate and his oxygen requirements were slowly increasing. Joseph starting running a temperature and an IV for administering fluid had been placed. It was clear that discharge was going to be delayed.

Joseph continued to slowly worsen. Antibiotics were started and cultures were sent to the lab for analysis. Two days before what was to have been Joseph’s discharge day, we received a call from the neonatologist. She had entered Joseph’s room for rounds around 9 am. Joseph was gray, bloated, they were placing him on a ventilator, and he was being moved to the critical side of the NICU.

We were told to come quickly to the hospital.

We arrived at the NICU and were met at the door. We were asked by the nurse practitioner if we had heard of necrotizing enterocolitis. Of course we had–we had been in the NICU for five and a half months. She explained that his X-rays looked similar to NEC, but that it just didn’t seem like an accurate diagnosis since he was so “old” in relation to the typical age of onset for NEC.

We finally saw Joseph. He didn’t look like the same child we had kissed good night 12 hours earlier. His color was awful. His belly was distended and was swelling into his chest. His eyes were dark and sunken. He was relying on the ventilator to breathe for him. He was incredibly ill.

We had already lost his twin brother and I was terrified we would lose him as well. We were just days from going home–how was this happening?

We sat vigil by Joseph’s bedside throughout the day, along with our families. The neonatologists and surgeons kept checking on him frequently. Labs were being drawn periodically and X-rays were being done. They were slowly looking more and more hazy.

The question looming was what to do. What do we do when we aren’t sure what is happening? How could he have NEC–he’s too old? What if antibiotics work and he doesn’t need surgery? What if the antibiotics don’t work and we wait too late to take him to surgery?

The surgeon decided to watch Joseph closely through the night. Scott and I headed home for a few hours to attempt to sleep. We arrived at the NICU the next morning before the sun came up. We saw the surgeon staring at a series of X-rays and I knew that had to belong to Joseph. He saw us immediately and said, “We are taking him to surgery to see what we can find. If we wait any longer, he will crash.”

Papers were signed, tears were shed, and Joseph was taken to the OR. When I kissed him before they wheeled him away, I was almost certain that would be the last time I would see him alive. Time seemed to slow. Seconds became minutes and minutes became hours. After what seemed like an eternity (I realized later it had been about an hour), the surgeon came to see us. There were 41 centimeters of salvageable small intestine, 28 centimeters below his stomach and 13 centimeters above his colon. There were over 100 centimeters of gangrenous small intestine.

The surgeon explained to us that he was unsure what Joseph’s future would look like with such minimal small intestine. He speculated that Joseph would ultimately need a liver or bowel transplant due to continued use of total parenteral nutrition (TPN), which is IV nutrition. He wasn’t sure Joseph could even live long enough for transplant.

While he knew what our answer would be, the surgeon gave us the option of closing Joseph up and letting him go because his future would be uncharted territory. We had already lost one child and there was no way we were losing another. We told the surgeon to proceed with removing the gangrenous intestine. We wanted to give Joseph a chance at life. 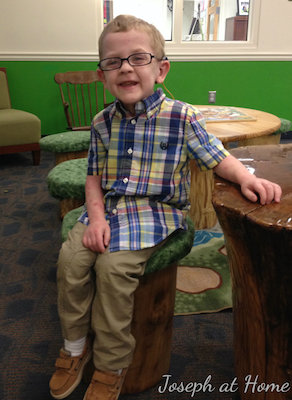 Joseph came through the surgery. He spent another eight weeks in the NICU and underwent two additional surgeries during this time–the main surgery being to reconnect his small intestine. During these eight weeks, Joseph progressed better than anyone ever expected. He ultimately worked his way to full continuous feeds via G-tube. His central line was removed the day before discharge. No one ever dreamed Joseph would come home not dependent on TPN.

After a long 228 days, Joseph came home for the first time.

Now five years old, Joseph continues to defy the odds. He has remained TPN-free since discharge–something no one thought possible. As a result of NEC, Joseph has several gastrointestinal diagnoses that he lives with daily. Joseph has short bowel syndrome, numerous food allergies, and was diagnosed last summer with Eosinophilic Esophagitis. While Joseph does eat by mouth, he receives bolus feeds via G-tube throughout the day to supplement his nutrition.

In addition to his gastrointestinal disorders, Joseph has auditory neuropathy (his hearing is augmented by a cochlear implant and hearing aid), mild hypotonic cerebral palsy, asthma, hypothyroidism, bronchopulmonary dysplasia, vision impairment, and overall developmental delays. Despite his long-term complications from his extreme prematurity and NEC, Joseph is a happy and joyous child who loves life. He loves attending school, learning, puzzles, going to the park, playing with his sister, and spending time with family.

Laura Martin is the NICU Ambassador Director at Graham’s Foundation, a non-profit organization that offers support to parents of premature infants. She is also a blogger for Preemie Babies 101. Before joining the team at Graham’s Foundation, Laura taught middle school chorus in the metro Atlanta area. Laura is mom to three: Joseph, Campbell, and Emily. Joseph and Campbell, fraternal twins, were born at 24 weeks gestation. Campbell passed away after 23 days of life. Joseph spent 228 days in the NICU before coming home. As a result of prematurity, Joseph has diagnoses such as auditory neuropathy, hypotonic cerebral palsy, short bowel syndrome (he has a G tube), asthma, vision impairment, global developmental delays, and he also has multiple food allergies. Emily was born at just over 39 weeks. Laura, her husband, Scott, Joseph and Emily live in Georgia. Laura and her journey raising a survivor twin can be followed on her blog: http://josephathome.blogspot.com.