Book Review:
Tasting Life: A Story of Courage, Strength, Humor
and Love in the Face of a Chronic Illness
by Inalee Koonin

Tasting Life is the biography of Lee Koonin, one of the earliest patients to receive intravenous nutrition at home. 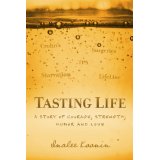 After complications from a 20-year struggle with Crohn’s disease. Lee Koonin was near death from malnourishment. Desperate to start living again rather than just existing, Lee and her husband pursued treatment with the pioneers of home TPN (total parenteral nutrition or IV nutrition). In 1978, Lee became one of the first patients to receive home IV nutrition, and soon found herself once again filled with life as her body regained the nutrients she so desperately needed through TPN.

In spite of her chronic illness, she continued in her roles of wife and mother, and found the resolve to reach out to others who she felt could be inspired by her story of survival in the face of digestive tract failure. She and her beloved husband Marshall founded the Lifeline Foundation, which was the first support group for individuals on home IV nutrition.

As word of their work spread, they began touring the country, speaking to media outlets about the home intravenous nutrition that had literally brought her back from the brink of death, and meeting others whose lives had been similarly saved. Their work was groundbreaking in a time when there was no such thing as the Internet and social media to connect people instantly and effortlessly. In 1983, they allowed the newly formed Oley Foundation to take over their efforts in connecting individuals on TPN with needed resources and support.

The Koonins were not spared from the typical trials of life. In the midst of battling to keep Lee alive and learning to do things like mix her own TPN at home or travel while managing her medical needs, they were also dealing with changes in employment, raising children, relocating, and the stress of buying, selling, and building homes. Throughout it all, they remained positive and hopeful about their future and dedicated their lives to sharing that hope with others whose lives had also been turned upside down by severe illness.

Lee’s daughter wrote of her mother, “Lee really did not want to be a medical trailblazer. She just wanted to be a wife and a mother. You know, the simple life. She was an accomplished writer of articles and speeches and had almost completed a book about her life and triumphs, as well as short ‘thoughts’ that resembled good Hallmark cards. Lee often said, ‘Life would be perfect if only the VCR worked,’ implying that most of her life was actually perfection, despite how others may have viewed her challenges.”

And that is why this book is a must-read for anyone living with chronic illness. Nobody chooses to go through life with a debilitating illness, but Lee’s story is an inspiring tale of how to, “not only exist, but to live with enthusiasm.” Tasting Life will have you laughing, crying, aching, cheering, inspired, and awestruck as you read about one incredible woman’s journey through life with Crohn’s disease.

Brandis is momma to Raya, the inspiration for her popular blog Feeding Raya, as well as four other children. As a photographer, she contributes to the all things multimedia at Feeding Tube Awareness Foundation. She also volunteers as a Tubie Surgeon for Tubie Friends.