From Birth to Death, With a Smile

I have never sat down and written about my experience of living with a child who has complex medical needs, but maybe it’s about time. My name is Marie and I am a mum to three beautiful children, but sadly I only hold two in my arms. My darling son Ollie passed away aged seven years old. 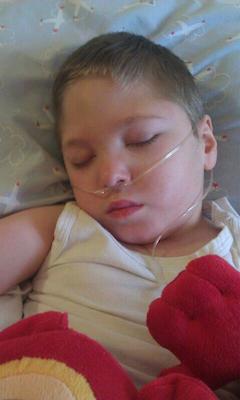 Ollie only weighed a tiny four pounds at birth. Within minutes of being born, he was carted off to intensive care, where our first experience of life with medical complexity began. Ollie was fully ventilated for the first 48 hours of his life. His brain was badly damaged for reasons still unknown.

At four weeks old, Ollie came home to me and his dad Mark. Still so tiny, and not meeting milestones, Ollie was diagnosed with Hypoxic Ischemic Encephalopathy, which resulted in spastic quadriplegic cerebral palsy, severe epilepsy, visual impairment, microcephaly, plagiocephaly, and required that we was fully tube fed.

As the first few years passed, we took things with Ollie in stride.

When he was about two, Ollie had a seizure that had caused him to flip on to his front, and blood was coming from his nose and mouth. With a racing heart I cleared the blood the best I could. I had to call an ambulance and Ollie was taken to hospital. An x-ray confirmed that Ollie had aspirated. His left lung was full of fluid and his right lung was working extra hard.

Two weeks later, Ollie came home, and he was joined by nebulizers, suction and a daily regime of chest physiotherapy. Along with all the medication and feeding equipment, our home was starting to resemble a hospital ward.

The next couple of years as Ollie grew, his seizures became more difficult to control, and each big seizure led to aspiration pneumonia. Finally, we found a medication that controlled his seizures, but sadly Ollie was so knocked off from the new medication he wasn’t able to control his secretions. They would block his airways and he would choke. Ollie’s chest was so full of secretions that he was drowning. He was transferred to inpatient hospice care.

We were told to prepare. My boy was weak and we were losing him. We decided to bring Ollie home to his family and the comforts of his own bed. This time oxygen cylinders, a concentrator machine, tubes and masks joined Ollie. The sound of the machine was quite deafening at times. 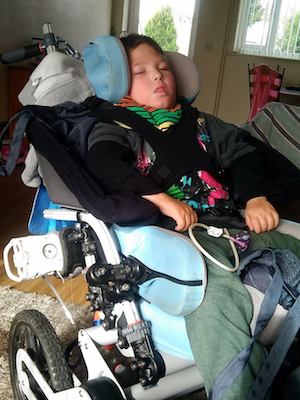 Family and friends came to say their goodbyes. Two weeks passed and the constant choking, suctioning, intense chest physiotherapy and lack of sleep took its toll on us all. We were given a choice, continue as we were, or stop the one thing that was causing it. Well, I wanted my son to live, so we chose to withdraw his seizure medication. Over a period of five days, Ollie began to wake, then smile then cough. His chest was clearing. But as feared, the seizures returned.

Over time, Ollie relied on oxygen more and more. A simple cold to some would be a huge risk to Ollie; it would always lead to yet another chest infection. And each infection made his lungs weaker. Soon the oxygen concentrator’s humming noise was constant.

One morning, Ollie woke shivering and I couldn’t warm him up. I had to increase the amount of oxygen he was already on and I called his community team and a doctor. He had yet another chest infection, so more antibiotics, more nebulizers, more chest physiotherapy and one very, very tired boy.

More than a month later Ollie was still no better. He was weak and he was making little effort with his breathing. We tried medications to make him comfortable, but nothing was making a difference. He needed more medical care, so once again he was transferred to hospice. Over nine days, Ollie slept more, and smiled less. He stopped tolerating his feeds; his body was slowly shutting down.

Mark and I visited every day, and saw no difference in Ollie. 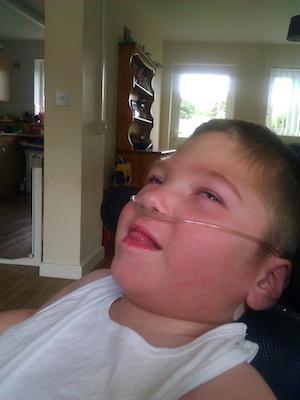 One Saturday whilst having our daily visit, my husband knew Ollie was slowly slipping away, but we had been through his before, and thought he would pull through it again. We had to stay positive. At 6pm, I kissed my boy good night and said, “See you tomorrow dude.”

At 11.50pm that night, I got the call nobody should ever get. My darling beautiful Ollie had passed away.

It’s been nearly six months since Ollie died and life without him is odd…empty. No sounds of the machines humming, no suctioning, no tubes and no Ollie. But our home is filled with wonderful memories.

I look back, and although life was difficult, everything just slipped in to place. We were a family. I will admit it was scary at times, but as a mum I did what I had to do to keep my son alive.

He taught us all so much, and I hope I can pass on my experience to others who are entering this world that is complex care.

Don’t look at tomorrow; think of the here and now. Take life minute by minute…and smile!!