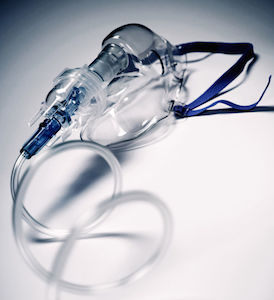 Every morning Alyssa wakes up in a body that doesn’t outwardly look medically complex, but her genetic disease, Cystic Fibrosis, dictates how she lives her life anyway.

Cystic Fibrosis (CF) is an autosomal recessive genetic disease that impacts 70,000 people worldwide by causing a malfunction in the protein that allows sodium chloride to properly move through the body’s cells. Excess salts cause a thickening of organ lubricating mucus, wreaking havoc in multiple systems, with the greatest concerns being in the respiratory and digestive systems.

Waking up with Cystic Fibrosis means an earlier alarm clock than her third grade peers for Alyssa. Most nine-year-olds pop out of bed to perform a quick morning routine, but Alyssa and other kids with CF must tack on an additional 30-60 minutes doing airway clearance and nebulized medications each morning. There are several options for airway clearance to choose from:

Once Alyssa completes her airway clearance and the accompanying morning nebulized medicines, she must begin the arduous process of eating enough calories to sustain her body for the day. Children with CF consume a minimum of 3,000 calories each day, and adults must consume between 7,000-10,000 calories a day just to maintain their small frames.

Alyssa, like many other children with CF, had a feeding tube placed when she was a toddler so she could get extra calories and nutrition while she slept. At eight years of age, Alyssa was able to consume enough calories orally to have the tube removed, but the likelihood of replacement at some future point is high.

Today she eats a high salt, high calorie, high fat diet. While the average person might feel a sense of jealousy that Alyssa can eat such rich and decadent foods without gaining unwanted fat, Alyssa routinely wishes she could just have a piece of fruit or some plain, undipped and unbuttered vegetables.

Days with CF are pretty normal looking, until they aren’t. Unless she is actively sick, Alyssa is able to keep up with her peers and function relatively well. When healthy, if she stays active and gets daily exercise, she is able to limit her treatments to just twice a day. When sick, she must perform her 30-60 minute nebulized medicine and airway clearance regimen up to four times each day. Sicknesses with CF often lead to hospitalizations and 14-21 days of IV antibiotics.

Children with moderate or advanced lung disease CF eventually need occasional or regular oxygen supplementation. Treatments for airway clearance are necessary, but the thick, sticky mucus is constantly forming and causing medical complications along the way. Children and adults with CF lose a little lung function each year, resulting in a large percentage of patients reaching end stage or needing lung transplantation by their mid 20s.

A new medicine, Kalydeco, was introduced into the market in 2012. The groundbreaking Kalydeco corrects the defective protein that causes CF in 4% of the CF population. This medicine has not been shown to be effective for patients like Alyssa, but studies are underway to find synergistic medications that will work with Kalydeco to widen the group that will be helped. We are hopeful that some day she will be able to replace her hours of daily treatments with a few pills, and that the days of CF ending in transplant or early death will be history.

Heather Walter is the mom of three kids, one with Cystic Fibrosis. In addition to her job as an Associate Professor of Communication at the University of Akron, she serves on the family council at Akron Children’s Hospital and works closely with her local Cystic Fibrosis Foundation to help educate others and raise funds.