Alison is 10 years old–a beautifully talented pianist, a dedicated soccer play, and a good student who is sensitive, kind, and so incredibly giving. She is also medically complex. Her umbrella diagnosis is mitochondrial disease, but she also has a laryngeal cleft, congenital heart defect, dysmotility of her entire gastrointestinal tract, bilateral hip dysplasia, a neurogenic bladder, and autonomic instability. 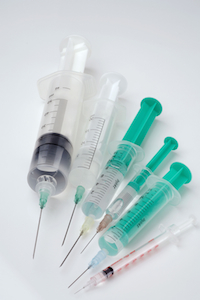 But out of everything, the most complex issue we deal with–the one that seems to frustrate her doctors the most and means that even a simple ear infection becomes a medical emergency–is her multiple antibiotic allergies, also known as multiple drug allergy syndrome (MDAS).

I can’t remember many of the specific details anymore other than erythromycin, which had been prescribed for her poor gastrointestinal motility, was the first antibiotic ever prescribed to her, and the first antibiotic that elicited an adverse reaction. I remember being told not to worry, that just because she reacted to that one, she wouldn’t necessarily react to all antibiotics in that class, that it might not even be a true allergy as research shows only about 10% of individuals who claim to have an antibiotic allergy truly are allergic. But then there were other reactions, including an antibiotic in the penicillin family, and Zithromax, which we had previously used successfully to treat recurring pneumonias, even though it is a macrolide like erythromycin.

I remember meeting her allergist for the first time, a young doctor at the children’s hospital who would become our partner as we searched for answers, our strongest advocate, and eventually, our savior. He reassured us that even if she was truly allergic to antibiotics in the penicillin and macrolide classes, there were many, many antibiotics to choose from, and even different sub-classes of antibiotics within the same family. In other words, she would be fine. Unfortunately, there wasn’t testing available at the time to effectively confirm or rule out her reactions as allergies. We had to hang in there until this became a possibility.

In the meantime, I remember a reaction to Bactrim while we sat in the emergency room, hives that emerged on her chest and belly within minutes of her first dose, something that was unusual for her, as her typical reaction occurred after multiple exposures. And then there was another similar reaction to another antibiotic, one that carries a “black box” label and isn’t approved for children, while she was inpatient for pneumonia. It wasn’t just us noticing her reactions. Now they were documented by people who knew more about these things than we did.

We were in a place where a simple ear infection constituted a medical emergency. A visit to the pediatrician for antibiotics wasn’t a fifteen-minute affair. It involved sending pages of records to her allergist, metabolic specialist, infectious disease specialist, and whatever other specialist was involved with the affected system. It involved waiting on the infection while everyone figured out the best course of action. And no matter what course of action they chose, treatment generally involved giving her an antibiotic that she was allergic to, treating through the infection with twice a day allergy medication, around-the-clock Benadryl, and Epi-pens. If you can imagine it, it’s kind of like feeding the peanut allergic child peanut butter over and over again and hoping for the best.

Antibiotic allergy testing eventually became available, and Ali was fast-tracked to the top of a very long list of patients waiting for a very limited quantity of testing kits. It was an unpleasant experience at its best, downright miserable at its worst. One round of traditional scratch testing followed by multiple rounds of holding down a screaming pre-schooler as the nurse administered upwards of two dozen intradermal injections of suspected allergens. 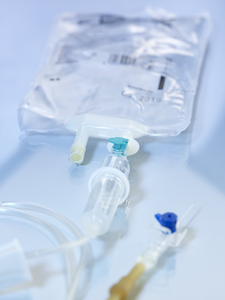 I forget what we were testing her for exactly, but I remember getting the news that what she was experiencing was a true allergy, putting us in a precarious position for treating her multiple infections that exacerbated issues associated with her mitochondrial disease. I may not remember all of the details, but I will never forget the look on her metabolic specialist’s face and the tone of his voice, upon hearing the news–she will not survive if she continues on this trajectory. Ali was four years old at the time.

Following allergy testing, Ali was booked for the ICU at Children’s to undergo additional testing, trials where she received graduated doses of intravenous ceftriaxone (Rocephin), a third generation cephalosporin. First and second generation cephalosporins had been ruled out, but as we learned, not all cephalosporins are the same, even though they fall within the same general class. She passed the trial and went through a second oral trial of cefdinir (Omnicef) as a day patient. She passed this as well, and this became our go-to antibiotic for virtually all bacterial infections, of which there were many.

Even though we had found an antibiotic that she tolerated well, we were still in a difficult position. In the words of her otolaryngologist, if we used it enough, it would eventually be like throwing water at whatever infection she had. Overuse would make it ineffective. And, if history repeated itself (which it eventually did), she would someday react to the Cefdinir as well.

Our best option at that point was to stop the infections. Unfortunately, this would involve taking away all food to eliminate the possibility of aspiration, which was causing her pneumonias. It would also require sinus surgery, something that would be complicated by her underlying health issues and not guaranteed to work anyhow.

Her allergist presented another option: gamma globulin therapy. I had never heard of it before he mentioned it. Basically, the immune properties from hundreds of blood donors are centrifuged into a serum that is then either injected subcutaneously (under the skin) or delivered intravenously. It had its risks, like anaphylaxis and transmission of blood-born pathogens–after all, it is a blood product–but our options were extraordinarily limited.

We decided to go for it. Since Ali did not have a diagnosed immune deficiency–we did not know why she was getting so many infections, though the theory was that the mitochondrial disease affected her immune system–and because of the high cost associated with gamma globulin, he warned us that insurance approval would be a fight. But her allergist was persistent, and she was eventually approved for a three-month trial. She was five and in kindergarten, and up until that point, she had never spent more than three weeks off of antibiotics.

Three months led to three more months, which led to three more months. The effects were transformative. With no more infections and no more antibiotics, we were able to cut back on the medications that helped her GI tract function. We were able to get rid of the leg braces that helped her walk and ditch the medical stroller that she relied on when she grew too tired. In fact, she did so well on treatment that we were given permission to go off treatment last spring in hopes that her overall health had improved enough that we could be done with the gamma globulin treatment forever. However, one bout of pneumonia over the summer was enough to remind us all of how difficult her antibiotic allergies can be to manage, and the impact that even a single bacterial infection has on her body. Her doctors unanimously voted to restart treatment, which we did this past August.

Treatments aren’t without issues of their own. Because we opted for subcutaneous gamma, we treat on a weekly basis. Treatments take about three hours from start to finish and leave her tired and sore. She frequently gets baseball-sized welts where the needles are placed, and sometimes she develops hives with treatment. And, with her busy schedule, it’s hard to find time to fit the treatments in so that they don’t interfere with all the things that ten-year-olds like to do.

But, it’s worth it. In short, without the gamma globulin, without blood donors, without her forward-thinking allergist and team of doctors, we would likely be looking at a very different existence right now. Instead, we’re living life, enjoying life, every single day. And for that, we are eternally grateful.