My son Bobby, now seven and with Down syndrome, first saw an immunologist three years ago after testing positive for MRSA exposure. He had been in and out of the hospital frequently for the first several years of his life due to a congenital heart defect that was finally completely repaired when he was three. Our expectation was that the repair would result in relatively good health, but even post-surgery he was constantly sick, mostly with a string of ear and sinus infections. Our fear was always that the infection would settle in his fragile lungs. 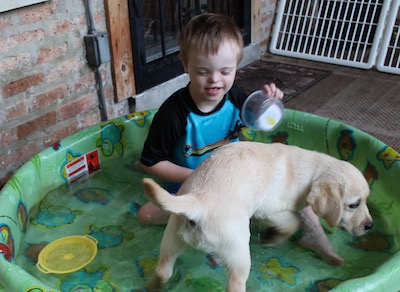 The MRSA was a tipping point for my partner, who requested/demanded a consult with immunology to see if we could prevent his seemingly constant infections. The resulting immunoglobulin test, which checks antibody levels by type, revealed that he had low IgM counts.

The findings were unrelated to the MRSA, but did explain Bobby’s constant sickness. IgM is the antibody that primarily fights the pneumococcal bacterium Streptococcus pneumoniae. Besides causing the dreaded pneumonia, the bacterium can also cause ear and upper respiratory infections.

Because Bobby’s IgM levels were only borderline low, the immunologist recommended that we give him the pneumococcal vaccine and monitor his levels going forward. The vaccine is designed to stimulate the release of certain types of IgM, and the hope was that the vaccine could kickstart the production of the antibodies and reduce Bobby’s ear and sinus infections.

However, Bobby’s IgM levels did not respond to the vaccination. As a result, the doctor was able to more confidently diagnose him with selective IgM deficiency. That is, Bobby’s immune system is not able to produce the desired level of IgM antibodies, even with the help of a vaccine.

We treat the selective IgM deficiency with prophylactic antibiotics. Bobby gets a small dose of Azithromycin (Z-Pak) three times a week throughout the school year. We take a break during the summer months when the chances of getting an upper respiratory infection are relatively low. There is some chance that the pneumococcal bacteria will grow resistant to the Azithromycin, but the small threat of resistance is negated by the potentially dire consequences of Bobby getting pneumonia.

Looking to the future, intravenous immunoglobulin replacement therapy (IVIg) may be an option if the prophylactic antibiotics fail us. Traditionally, IVIg was considered a non-option for selective IgM deficiency because the blood product does not contain any IgM. However, more recent studies show that increasing the level of IgG antibodies in the body may partially counteract the low levels of IgM and so some patients do receive IVIg. Still, this treatment is nonpreferred in cases where the patient responds to prophylactic antibiotics.

The antibiotics have been transforming. The boy who used to be sick most of the fall and winter now gets maybe one or two ear infections a year. When he is sick, his recovery is a few days instead of a couple of weeks. The improvements to his health have been enormously beneficial to his development.

For Bobby, the selective IgM deficiency is a very minor condition to treat. Yet the repercussions of not having the diagnosis could have been potentially fatal had he developed pneumonia. Because ear infections and upper respiratory infections are so common in children with Down syndrome, I doubt that our pediatrician would have recommended an immunology consult without prodding from my partner. My advice is that if your child is continually sick, you should push to meet with an immunologist. The antibody testing requires a blood draw, but the results can provide extremely valuable information.

Anne Penniston Grunsted writes about parenting, disability, and family life from her perspective as a lesbian mama. She has been published in The Washington Post, Brain, Child Magazine, Mamamia, and is a regular contributor to RoleReboot. She lives in Chicago with her partner and son. More of her work can be found at Anne Penniston Grunsted.