My son Spencer is a busy guy. He was born with Say Barber Biesecker Syndrome, a rare genetic syndrome that has caused him to have physical and cognitive disabilities. He has been in therapy—physical, occupational, and speech/feeding therapy—since he was two days old, and continues to receive therapy both in and out of school. 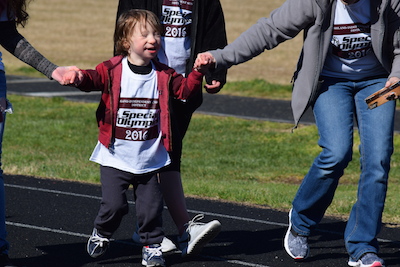 The goal in mind has always been to help Spencer become the best Spencer he can be, but still balance that with letting him be a kid, too. And so far our system has worked. Spencer has made huge gains and has done things that doctors said they weren’t sure he would ever do, like walking (for the most part) and being able to get his feeding tube removed.

Shortly after starting school, Spencer was diagnosed as being on the Autism Spectrum, which honestly didn’t surprise me. My husband and I have always known there was something else going on with him other than his syndrome. He has always had sensory problems and the simplest things would throw him in to sensory overload and cause a meltdown. He has always struggled with affection and has always been kind of distant. He never sought out the attention of other children and was always happy to keep himself entertained and preferred to play alone. He eventually started stimming and would hit the back of his head against stuff when the world got too overwhelming or things didn’t go his way. He didn’t communicate or have any interest in doing so, no matter what we tried.

One of our therapists has a daughter who is an ABA therapist. (I’ll explain what ABA is momentarily). Spencer is on a Medicaid Waiver in our state that covers living supports and pretty much anything he needs, as long as we stay within our yearly budget. She learned that our waiver would cover ABA therapy and thought it would be beneficial to Spencer. While I was hesitant to look in to ABA since we do so much therapy already, we were hoping to find something to help Spencer, whose behavior was becoming harder and harder to predict and control.

We told our waiver caseworker that we would like to pursue trying ABA. He warned us that not all ABA therapists are created equal so to proceed cautiously and sent in his required paperwork on his end. After our paperwork was approved, we called a local agency that does ABA and were actually able to request the therapist we wanted. We actually wound up using our therapist’s daughter since we knew the two of them would be a good fit together.

ABA is short for Applied Behavior Analysis. From my understanding, the therapist looks at why a person does a certain behavior and then figures out a way to solve negative behaviors and reinforce positive ones. I kind of see it as occupational therapy, speech, and behavioral psychology all mixed together. We also get reports like we do with other therapies, which for us is called a Functional Behavioral Assessment. In the assessment his behaviors that we are working on are identified, and also the reasons why he does them.

For example, Spencer would head butt pretty frequently. Through observation, our ABA therapist concluded that he does it primarily for attention and secondarily for sensory input. Then she makes goals on how to help him through these behaviors, which is pretty similar to the goal portions of our usual therapy reports.

ABA comes in many different formats. I’ve heard some people say they were recommended doing 40 hours of ABA a week. That’s just not for us. Spencer does a lot of therapy already, and he also has school. While it’s important for us to have Spencer be as functional as he can, he still needs to be a kid. I suspect those families are the ones who need aggressive, high level supports so their kiddo can live as normal a life as possible and we just don’t need that level of support.

Our goal isn’t to make Spencer “normal.” Our goal is to help him overcome the challenges that Autism causes, versus the ones Say Barber Biesecker Syndrome does, so he can function better. He will never be normal, and that is fine. Normal is boring.

We do three hours of ABA a week, which breaks down to two hours on Tuesdays and one hour on Thursdays. Thursdays are his harder days, so we keep that session short. Our therapist comes to our house with a couple bags full of “tools,” and works with him in our living room. His dad or I hang out in the adjacent room just out of his line of sight. 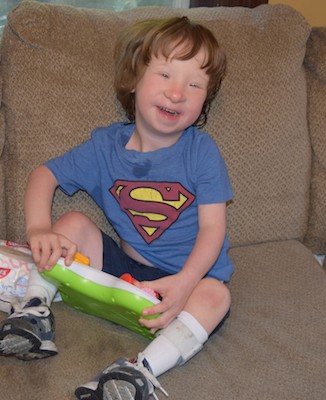 When we first started ABA, he cried nearly through the whole session. That was hard to listen to, especially since as parents our first instinct is to rescue our child, whether he actually needs rescuing or not. Spencer’s first response to doing something he doesn’t want to do is crying.

His therapist has him do things that are kind of challenging for him, like puzzles or object identification, but he is fully capable of doing, to work on his behaviors. She’s very vocal about what he needs to do, what he has left, and what his reward will be when he’s finished. When he finishes a task, she rewards him with iPad time or a musical toy (his reinforcers). If it takes him a bit longer or he kind of drags his feet about doing something, she’ll say, “Let’s try that again and let’s focus this time.”

They also work on other things such as sign language and making speech sounds. We worked on using the sign “more” for ages with Spencer, and he just wasn’t getting it. Now he is signing it like a champ. We were also having a hard time getting him to shake his head “no” appropriately since he would shake his head no for everything. Between ABA and Speech, we now have him effectively shaking his head yes and no nearly all the time. She works closely with our other therapists on things they are working on too and also expanding on those ideas.

I mentioned before that when we first mentioned signing up for ABA, Spencer’s caseworker said that all ABA therapists weren’t created equal. And I suspect they aren’t. Just like with any therapist, there are good ones and bad ones, good fits and bad fits. We lucked out and have found Spencer’s match. Our ABA has nerves of steel, I swear. She is probably the only person on this planet more stubborn than my son, and he has realized that.

These days, ABA runs pretty smooth. He still throws the occasional fit, but there is much less crying and more working. She’s also patient, passionate, and one of Spencer’s biggest cheerleaders, and he really enjoys her company.

We have noticed a ton of improvements in Spencer since starting ABA. He focuses better in his other therapy sessions, at school, and with us at home. He’s attempting to communicate more. His eye contact is better, and he is interacting more with us and his peers. The meltdowns are less frequent, and the head butting has decreased dramatically.

Before starting ABA, we had made the appointment to discuss medication options for Spencer because he was anxious all the time and his behavior issues were starting to get out of control. That’s completely off the table for now. ABA isn’t some miracle cure or anything, but to us the three extra hours of therapy a week is well worth it.