A Shared Vision: Partnering with Therapists

Therapy is a necessary part of our lives as parents of children with special needs, and sometimes it can feel like a chore. When therapy goes badly, it can be disruptive, at best. We have experienced therapists who seemed unsure of themselves and didn’t understand the importance of partnership. We had a therapist tell us we didn’t need to push our son to do things that were beyond his developmental level. Then there was the therapist who had difficulty with cultural competency and made offensive remarks. Each of these therapists has given us an appreciation for those who get it right. The right therapist is an advocate and a visionary who can see past today’s limitations and into a brighter future. 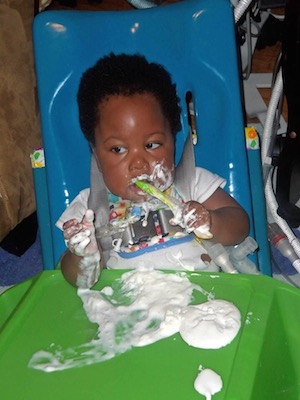 When it goes well, therapy becomes a partnership and a circle of support for your child. Richie’s best therapists have listened to our goals and plans for him and been his cheerleaders. They have helped him soar past previous plateaus and set new, more challenging goals. Most importantly, they have treated me as an equal. They have respected my knowledge and helped me to learn more about Richie. They have understood the battle Richie is fighting against CFTD myopathy, and they give us new weapons to defeat it. They troubleshoot setbacks and help us work around obstacles.

Therapy has been full of Eureka! moments for us. We first discovered Richie’s sensory processing disorder through therapy, when he showed tremendous distress over certain noises and textures. We also discovered how perceptive a one-year-old Richie was when he began faking exhaustion to try to shorten his therapy sessions, and then perking up and giggling as the therapist packed up to leave. We learned that Richie does things in his own time by watching him refuse to do a task and then do it quickly when the therapist turned her back. We learned that Richie loves novelty, and keeping him engaged requires thoughtful effort. Therapy has given us an additional way to get to know Richie.

Therapists have a window to the miracles our children have inside them. They share our journeys. At ProMedica Toledo Children’s Hospital, Teresa Lutz, Richie’s NICU physical therapist showed me—gently and carefully—how to loosen his tight joints and position him for better breathing when he was just days old. As a first-time mom, I was terrified of his fragility, and her caring and kind manner eased some of my anxiety. Karen Ruhe, Richie’s first home physical therapist, began working with him when he was four weeks old, and she saw him through learning to sit, getting a stander, and learning to drive his first motorized chair. She helped me to set challenging goals for Richie, and she never let him get away with doing less than he was capable of doing.

Richie’s occupational therapists have helped him to overcome many of the challenges of his condition, including contractures and low mobility. Sherron Williams, Richie’s first occupational therapist, taught me to use kinesiotape to increase the movement of his joints and to encourage him to raise his head. Amanda Baron helped him to use his fingers more precisely and sit independently, and she gave me a wealth of knowledge. When we moved from Toledo to Cleveland last year, we were lucky to find Marci Jacobs, who understands Richie’s intellectual gifts and meticulously finds ways to help him reach his potential. 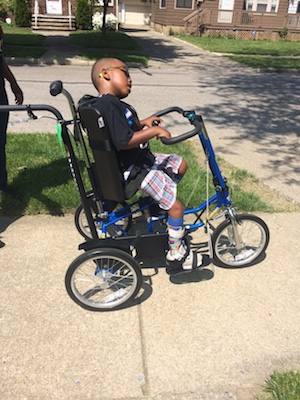 Richie’s speech therapists have helped him to close the gap in his communication skills. Because he had a trach, he was basically silent until he was able to use a speaking valve at age two. Rachael O’Brien helped us to learn Richie’s ways of communicating with us when he was an infant. His therapist Katie Bochi supported our use of sign language and taught us about how to work through his dysarthria; she was willing to fall on the floor and act frightened when Richie accurately produced the word “Boo!” Jackie Vitale, Richie’s current speech therapist, helped us to get an adaptive communication (AAC) device, and continues to share our joy when Richie’s speech and communication improve in leaps and bounds or even in baby steps.

Richie’s therapists are closely tied to his story and to ours. Their involvement is personal, and the love they have for their work and for Richie’s future is genuine. They know how far he has come.

Looking back over the years, Richie has reached so many milestones. At birth, he was only able to move his fingertips and eyes, and now he scoots, rolls, and sits. He was silent for two years, but now he chats and recites his favorite movies, and his speech, while still greatly delayed, is improving.

In the past year, Richie had his trach removed, he took his first steps with a gait trainer, he learned to drive his motorized wheelchair (almost) without incident, and he overcame some of his most sensitive sensory issues. He’s not even five, and his life has been so full of triumphs that we never knew, but always hoped, he would reach.

When the therapist sees what we see in our children, magic can happen. The best therapists see Richie the way we do, as pure potential.

Charisse Montgomery, author of Home Care CEO: A Parent’s Guide to Managing In-Home Pediatric Nursing, is a professional writer, editor, wife and disabilities advocate, in addition to her most important role as mama to Richie. Having lost her sister to fiber-type disproportion myopathy in 2012, she advocates on behalf of her son and in memory of her sister. She has a bachelor’s degree in English from Towson University and master’s degrees in English and Educational Psychology from The University of Toledo, with research focused on empowering parents with medically disabled children.

She recently completed a graduate certificate in Patient Advocacy, and she serves on the Patient and Family Advisory Council for Rainbow Babies & Children’s Hospital. She can be reached at @madvocator on Twitter, Facebook, and Pinterest or through her personal blog site, madvocator.com.