Being a parent of a child with special needs, you want to leave no stone unturned when it comes to therapy. When my daughter Lily was three, she was diagnosed with autism. We pursued the typical routes of therapy including ABA (applied behavioral analysis), speech therapy, and occupational therapy. However, at the age of five, upon entering junior kindergarten, many of these subsidized programs ceased to be offered for my daughter, as the school was suddenly responsible for her daily programing. 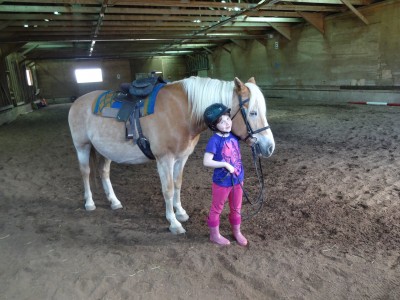 It was around this time that we decided to look into therapeutic horseback riding. Lily was always fond of nature and animals, and I always tried to expand on the things in her life that were successful. We had previously tried music therapy, as my daughter would always stop and listen when someone was singing and music was played. However, we soon realized that Lily loved the untethered access to music, but not the structure of music therapy. I had heard great feedback from fellow moms about therapeutic horseback riding and started looking into local centers that might offer this type of programming.

After a few weeks of research, we found a country therapeutic riding center not far from Ottawa where we live. We signed up for a 10-week session. At first, the lead instructor came to our house for an interview to find out about Lily’s strengths and weaknesses. Once all the papers were signed, we anxiously awaited our first summer session.

Children with autism often have strong sensory issues, and my daughter always struggled with the multitude of potent smells. Upon arriving at the farm, Lily was quite overwhelmed by the farm odors, but she soon adapted. Each child was matched with a retired army horse, one riding instructor, and two volunteers. They would lead the children around the arena (or outdoors when weather permitted) to help them with their balancing and center of gravity. The participants would need to put rings around sticks or put balls in hoops while balancing on the horse.

This was a great center to ease into horseback riding, as the staff was cautious and highly trained. Many of the participating children had severe physical and neurodevelopmental disabilities, and the staff was well equipped to ease them into horseback riding. Lily’s challenges are related to social skills and emotional regulation, so she quickly adapted to riding horses. Her core muscles improved, she was proud of mastering a new skill, and looked forward to going to her lessons (which is always the most important thing in my book).

After the successful semester ended, we received a progress report with all of Lily’s accomplishments. The report covered communication skills (talking to the horses and helpers, following commands), social skills (waiting for her turn, greeting volunteers, knowing the horse’s name), physical skills, and an extensive list of riding skills.

We were very disappointed to find out that there were no more classes till the next fall. When asking about continuing with a private coach, the instructor gave us a list of things that my daughter couldn’t do and wouldn’t be able to do for a long time without three adults at her side. I disagreed, since I saw my daughter accomplish a lot in a short time and felt that she could do more. I felt that this instructor was looking at my daughter’s diagnosis and not her capacity. Despite the optimistic report, she offered us a broad list of “can’ts” and this didn’t sit well with me.

I started looking into other centers, and this is when I discovered Tranquil Acres therapeutic horseback riding center. Tranquil Acres was located in the country as well, south of Ottawa. The difference is that Tranquil Acres was more geared towards children and youth with mental health challenges as opposed to physical disabilities. Like many therapeutic services for children with special needs, sometimes it’s more about the people involved, the champions, then simply picking one therapeutic program over another.

We visited the riding center, and Lily was instantly drawn to her coach’s presence, leading to an engaging conversation. The coach explained that the center also offered Equine Assisted Therapy, which is counseling with the assistance of the horse, but not a riding program. Although my daughter was highly verbal, we were more interested in pursuing her experience of therapeutic horsemanship. We signed up for a first lesson.

During her first visit, Lily and her coach went to get the horse in the field and led the beautiful mare, Shola, back to the stable for a good brush and grooming. Her coach would constantly talk about Shola’s needs, which helped Lily to work on her empathy. When it was time to start, Lily mounted the horse from a raised platform and off they went.

I was terrified! I had been told that she needed three people to keep her in her saddle, but her coach quickly assessed her strengths and skills and felt that she was capable of riding on her own, as he led Shola around different obstacles in the arena. I started crying! I knew that she was capable of more, but was nervous for her. She thrived under her coach’s careful guidance.

As a mental health approach, this program focused on so much more than the physical skill of riding. Whatever would come up in the arena, the coach would address it. Whether it was Lily’s anxiety, her distraction, or her awkward social attempts, the arena became a safe supportive space for Lily to express herself. The trusting relationship between the child, the horse, and the practitioner became a safe haven for Lily to evolve and grow.

Sometimes it’s hard to put into words how something benefits your child. All I can say is that in that arena, Lily is accepted for who she is with patience and compassion (from her coach AND horse) and as a mom, I always want more of that in her life!

Isabelle is a wife and mother of 8-year-old Lily. She works as a Family Navigator and offers peer support to other parents of children with mental health or developmental challenges. Isabelle is completing her Master’s in Social Work in order to continue her role as a parent supporter.