“At Least It Isn’t Cancer!”

When my daughter was critically ill on an oscillating ventilator, the most hurtful comment anyone ever said to me was, “At least it isn’t cancer.” I know for a fact that I am not the only person who has heard this comment. But why on earth would someone look at a child who has spent her entire life fighting a degenerative neurological disorder, one that would eventually take her life, and tell me to be thankful that at least she didn’t have cancer? 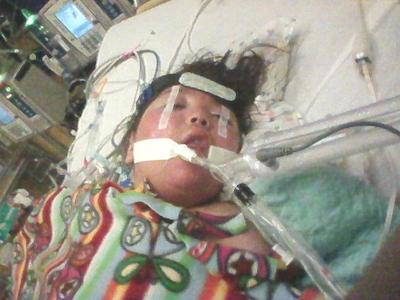 For a lot of adults, cancer is the only reference point they have to chronic disease. And adults are really afraid of cancer. After all, 43% of men and 38% of women will develop some form of cancer at some time in their lives, and about half of those people will ultimately die from it.¹ Because it is so common, people fear cancer more than anything else. Adults also tend to be more familiar with the side effects of cancer and cancer treatment, including things like hair loss, nausea, and vomiting.

While cancer in children is of course devastating, it is not the only condition out there, and not even one of the most common ones in children. Cancer affects only 32 out of 100,000 kids under 15.² But 309 out of 100,000 children will be diagnosed with cerebral palsy and 100-300 out of 100,000 will have neuromuscular diseases such as muscular dystrophy or spinal muscular atrophy.³

Kids with conditions like severe cerebral palsy, muscular dystrophy, certain forms of mitochondrial disease, and thousand of other lesser known diseases are way more likely to die from their conditions than kids with cancer. Cancer now has an 80% survival rate in children. On the other hand, three quarters of kids with severe cerebral palsy will die before the age of 30, and half of boys with Duchenne muscular dystrophy will die by age 25. The vast majority of deaths in children, besides unintentional injuries, are actually due to congenital or genetic conditions, and occur in the first few years of life.4

Many of the conditions kids get don’t have a cure, and often there isn’t even a treatment other than supportive care. And because so many of the chronic conditions that affect children are rare and require complicated care from parents and doctors, there are usually few — if any — research dollars, as well as few — if any — dollars donated for advocacy purposes. Lack of advocacy leads to a lack of recognition, which further leads to a lack of research dollars. No research dollars means no treatment and no cure.

But why are conditions like severe cerebral palsy, spinal muscular atrophy, and even rarer disorders so less recognized and studied? In large part it is because kids can’t vote and don’t have much (if any) influence in determining how to advocate and fund treatment. Disorders that affect children primarily or exclusively always receive less funding and attention unless there is an adult component to the disease. In addition, most of the conditions are rare and affect comparatively smaller numbers of children than common adult diseases like cancer or heart disease.

Kids with any of these conditions — cancer included — work ridiculously hard every day to do the simplest things we all take for granted, like breathe or eat or walk. But those without a “name-brand” condition often find their journeys minimized, because their conditions are less well understood.

Another factor is that our society as a whole is much better at supporting a so-called “regular” child who suddenly gets a disease than one with a chronic, lifelong complex condition. When a more acute-onset condition is diagnosed, the child either goes through treatment and is cured, or the child dies. In either case, the journey is not usually tremendously long, and rarely lifelong. Of course, there are some kids who develop chronic conditions or disabilities from their diseases, but in the most general terms, it’s an either/or situation. The child either gets cured and gets back to living life, or he dies.

When the journey is shorter, it’s much easier for family and friends to cope with it. Those first few months, people will volunteer to help or bring groceries or a casserole. But when the journey continues on for years and even decades, the offers dwindle and finally disappear.

It is far easier to process the black and white of cure and death. The constant shade of gray that is reality for families of children with severe, lifelong chronic conditions is much more difficult to grasp.

When there is no hope a condition will get better, family and friends become emotionally overwhelmed. They are paralyzed by their fears, and overwhelmed by their inability to “fix it” in a meaningful way. Friends fall away, and family members stop helping out.

And let her know that living a lifetime in the shades of gray world of chronic disease is a far greater challenge than most people can even begin to comprehend.

Susan Agrawal is the editor of Complex Child.