Special Needs Parents Get Cancer Too

I’m a special needs mom. I’m very good at it. My son Spencer was born with a rare genetic syndrome called Say Barber Biesecker Syndrome, characterized by cognitive and physical delays, heart defects, feeding disorders, airway problems, and many other issues. When he was born, being a special needs mom became my identity, and I did everything in my power to make sure he could be the best Spencer that he could be. I put my career and graduate school on hold so I could be the mom and the relentless advocate that he needed. 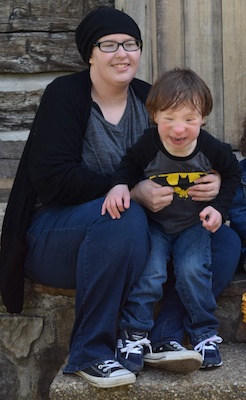 And he has thrived. He started Kindergarten this fall, so it became very apparent that he didn’t need me so much anymore, and I could pick up where I left off six years ago. I have never regretted for a second making sacrifices for him, as they have never felt like sacrifices. I made a list of things I wanted to do—the biggest two were starting graduate school and to get healthier so I could live as long as I possibly could.

I started going to the gym and eating healthier. I also went to the doctor to get some health issues taken care of that I had put off for way too long, which seems to be the norm among parents of children with special needs. One of the many doctor appointments I made was to get this lump I had had on my throat checked out. It had been there as long as I remember, and I had started to get it checked out several years ago but didn’t make the follow-up appointments.

The Story of Herbert

My recovery from the surgery was pretty brutal. I had my submandibular gland removed during the surgery, as that’s where Herbert resided. In the surgery, my facial nerve was damaged and caused half my mouth and tongue to go completely numb. The nerve damage was pretty painful to me. My ENT told me in a follow-up appointment that the biopsy came back abnormal, but I didn’t think anything of it. He didn’t seem concerned, so I didn’t worry about it, and life moved forward.

A few weeks later, I went to take my MAT test that I needed to apply for graduate school. While I was taking my test, I missed a call from my ENT’s office. I listened to the voicemail in the car, and the nurse said that the doctor wanted to see me right away, today if possible. As a special needs mom, I know doctors, and I know that they never want to see anyone that quickly for a good reason. I knew right then either Herbert was something really cool or he was something really bad.

And it was bad. He came out and said that I had cancer. He said, “There is no easy way to tell someone who is only 31 that they have cancer, so I just have to say it.” He said it was an aggressive type and it had to be treated aggressively. All he told me was that I had Mucoepidermoid Carcinoma. He didn’t know what grade or anything else. He lined me up with one of his colleagues at a cancer center about three hours from where we live, and informed me that that doctor would be calling me himself.

After I left the appointment, I texted my in-laws to see if they could come over to our house, and I told them what was going on. I Googled my cancer on my phone in my car, and Dr. Google said either I was going to be fine or it was going to kill me.

I was in a complete fog. I eventually made it home and tried to hide the fact that anything was going on until my in-laws got there.

The hardest thing I’ve ever done was hand my day-old son to a paramedic to take him to another hospital’s NICU. The second hardest thing I’ve ever done was tell my husband I had cancer (the third was telling my dad). After I told my husband, we called or messaged those closest to us so they didn’t have to find out on Facebook. The whole time I assured everyone that I wasn’t going to die, that it was going to take more than cancer to kill me, even though I wasn’t entirely convinced of it myself.

I couldn’t even look at my children without bursting in to tears. I’ve never been afraid to die, but my children need me, especially Spencer. My biggest fear was leaving them and leaving my husband alone.

I was given the cancer news on a Tuesday. By Thursday, I was driving to the cancer center to meet the doctor we now refer to as my Fancy ENT. He said that I had high grade Mucoepidermoid Carcinoma in my submandibular gland, and that he needed to do a neck dissection on the left side of my neck. I would be left with permanent weakness on that side of my face, I’d have a more impressive scar, and that I would need to do radiation. I asked him if this was going to kill me, and he assured me it was not, which was a huge relief. 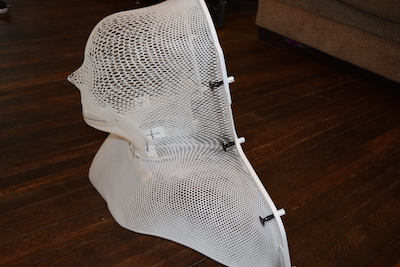 Fancy ENT didn’t want to do surgery until we had my slides back from the Mayo Clinic (yeah, Herbert was extra fancy). We had to postpone my neck dissection once because he still didn’t have the slides. He didn’t get them in his hands until the day before my rescheduled surgery. He looked at them and said that he believed I only had intermediate grade Mucoepidermoid Carcinoma. He still recommended the neck dissection because my surgical margins from where they removed Herbert were less than 1 millimeter, and there was suspected lymph node invasion.

Surgery was horrible. At my post-surgical follow up, Fancy ENT told my cancer hadn’t spread to any of the lymph nodes or tissue they removed, and I was technically cancer free. I did a consult with a radiologist at the center and they told me that my odds were 50-50 that Herbert would come back without radiation. If I did radiation, that would take my odds down to 10% of the cancer returning.

After having a child with an incredibly rare genetic syndrome and getting rare cancer in the rarest spot it happens, I decided that playing the odds wasn’t the best idea.

So I did radiation, 30 rounds once a day Monday through Friday. Radiation, just for the record, is absolutely terrible. All those doctors seemed to sugarcoat it and make it not seem bad at all, but it is really, really horrible. They made me a plastic cage mask that strapped my head to a medical table, which was super fun considering I’m slightly claustrophobic. The actual radiation doesn’t hurt while you’re getting it done and it doesn’t take very long, but it’s still kind of terrifying at first. 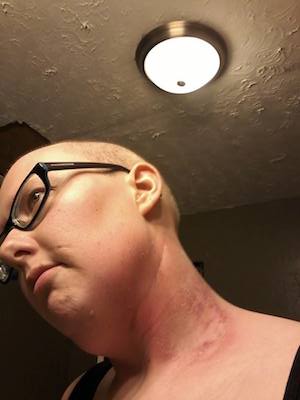 I quickly got used to the mask and the routine, but after the first week my body was no longer my own. My mucous got so thick I would choke on it and puked it up constantly. My mouth went from being fine to having a horrible burnt taste. Nothing tasted like it should, and eating wasn’t enjoyable at all. I developed very painful mouth sores on my tongue and couldn’t eat at all. Percocet didn’t touch the pain. My left tonsil felt like it had rocks in it and was raw. At around week 4 of 6, I could barely choke down a four-ounce Boost a day, and I wound up feeling like I was half dead. I had no energy and slept most of the day.

As I’m writing this, I finished radiation nearly 3 weeks ago. My tongue, mouth, and jaw are still super sore, but I’ve been able to eat again for about a week now and it’s glorious. I lost 40 pounds during radiation. I was pretty sedentary the last three weeks of it or so, so I lost a ton of muscle mass, and just walking up the stairs leaves me winded. I am struggling lifting Spencer, which is something I usually have little issue doing. I shaved my head about three weeks in because the radiation field made a ton of my hair fall out, and it was less traumatic to just shave it rather than pulling it out. The left side of my face is noticeably weaker than the right and my smile is crooked. In six weeks I went from looking like me, to looking like someone else entirely.

I feel like someone else, too. Toward the end, it was like my spirit was crushed. I felt so passive, and passive would be the last word someone would use to describe me. I’m now starting to get my angst back, and despite being in a lot of pain still, I’m starting to feel human again.

You Need to Take Care of Yourself!

So why write this? Why tell my story? Because this could happen to you. As caregivers to children who are medically complex, we constantly ignore ourselves. We ignore our physical and mental health, because we feel it’s not as important as the health of the person we care for. My doctors believe that my cyst was originally benign, but it eventually developed cancer. If I had had Herbert removed when Spencer was a baby, I could have possibly avoided all of this. I’m 31, and I will have to deal with a lifetime of side effects.

I’m very lucky. I could have easily died from cancer had I waited any longer. My cancer could come back and I could still die. I had no symptoms aside from a lump, and I never felt sick.

To be effective caregivers, we have to take care of ourselves first. I know it’s hard, but trust me, it’s necessary.

I couldn’t have done it without my husband. Luckily, he could take time off work to take care of me and the kids. I could barely function, let alone take care of the kids. He proved that if something does happen to me, he has things covered. He has always been a great advocate for Spencer, but now I know that he could be for our other two children as well.

As for me, I’m back to picking up where I left off 6 years ago. I’m slowly going back to the gym. I signed up for graduate school and start in the fall. I’m working on checking things off my list. While my life is full, there are still things I want to do and I realize I need to start doing them.