When Your Child Realizes He Has Cerebral Palsy: Adjusting to Life

Being an eight-year-old child is hard enough when you’re just dealing with the daily rigors of school and home life, but the challenge is compounded when you can’t talk, walk, and struggle to eat. Meet my son Bryan, who lives with quadriplegic spastic cerebral palsy (CP). The life-long condition affects body movement and muscle coordination. In Bryan’s case, it also affects his everyday tasks such as feeding and personal care. 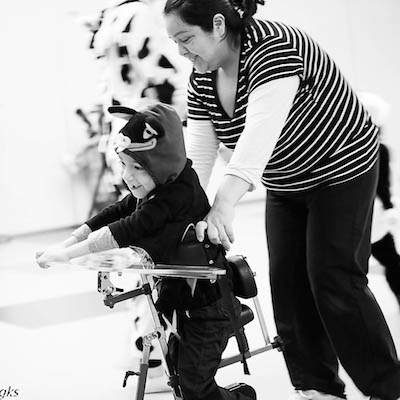 I believe that one of the reasons people don’t know much about CP is their lack of exposure to people living with the condition. Before I had Bryan, I thought that people with CP were intellectually disabled and they were in wheelchairs, but now I know a lot of people who have CP and I am aware of what it is.

For the last six months, Bryan has been aware that he has cerebral palsy. He is wondering why he has it. He asks me questions about why he can’t run or walk. CP can range from being mild, such as just affecting one limb or one side of the body, to severe, which impacts all four limbs and limits a person’s ability to talk and walk. Bryan is just starting to identify that he has quadriplegic CP and is trying to understand it more.

I feel he was enjoying his life through activities such as swimming, going to the park, and skating, but that was before he noticed he had CP. He is realizing now that he isn’t actively swimming, he is just in the water. He is sad due to the reality of the situation.

We are always thinking about ways to support Bryan, such as physiotherapy, occupational therapy, horseback riding, and speech therapy. We are also seeking out counseling, books, and other people who have CP.

There are a lot of resources available to parents who have children with cerebral palsy, including books, articles on the Internet, services through children’s hospitals, and the free programs and services through charities, such as the one in our area, the Cerebral Palsy Association of British Columbia. I also talk to others in similar situations about what life is like for them.

One of Bryan’s weekly joys is attending the Dance Without Limits program offered by the Cerebral Palsy Association of BC. The program runs in several locations and is accepting and inclusive of all people with disabilities. I feel it has made him more social and increased his independence. He communicates through the activities and games at dance the best way he can. I am glad that Bryan is enjoying the Dance Without Limits class and looks forward to the program.

On the bright side of things, I believe that Bryan will definitely have a place to live in the future, and will have some friends, but won’t have a job. I just want the best for my son and want him to live a life without limits. I think he’ll be happy, as it all depends on his upbringing and support system at home and around him.