A Family in Speech Therapy 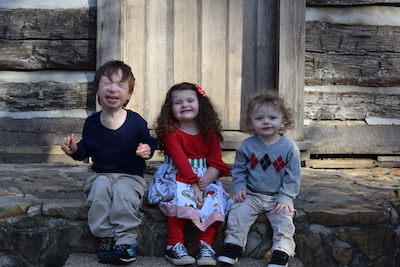 In our household, communication involves gibberish, mispronounced words, “made up” sign language, lots of yes/no questions, and robotic voices. I have three children and all three have speech difficulties. The inability to effectively communicate is incredibly frustrating for our entire family. We try our best to understand what our children are trying to say, but most communication in our household requires playing a guessing game.

Our oldest, Spencer, is seven and has Say Barber Biesecker Syndrome. SBBS is a rare genetic condition that causes a variety of issues, including low muscle tone, hearing loss, intellectual delay, cranio-facial muscle weakness and Pierre Robin Sequence. He has been in speech therapy since he was two days old, which initially focused on his feeding issues.

It is becoming apparent that Spencer will probably not talk. Some children with Spencer’s syndrome speak, but many do not. Currently, he says “mom” and imitates a few sounds. His expressive language ability tests at around the six-month-old age range. He can answer yes and no questions, but not reliably.

While I will never give up hope, we have begun to explore different ways of communication for Spencer. We have used sign language with Spencer since he was an infant. He can make about 10 signs, but they are his versions of an ASL sign. He was born with his hands clenched and he still has fine motor problems, so some signs are hard for him to make. His signs for play, all done, and go are all identical to the casual observer.

Knowing that sign language may not be the best method for Spencer to communicate with the speaking and listening world, we started using PECS (Picture Exchange Communication System) cards to work on object identification and help him build a vocabulary. The goal we have with PECS is to transfer his PECS skills so he can communicate by using a speech device. 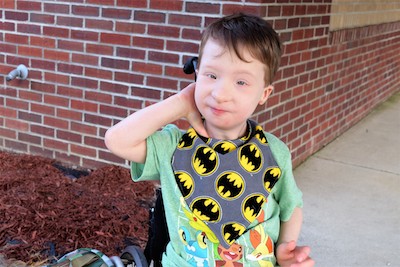 Recently, Spencer completed an augmentative and alternative communication evaluation to determine what type of assistive technology would work best for him. We are currently trialing TouchChat on an iPad mini. It’s so much fun to hear him use a voice, even if it is a robotic one.

We realized that our daughter had an expressive language delay shortly before her second birthday. She did not talk often, and when she did, it was gibberish. We discussed our concerns with Spencer’s speech therapist and we agreed she needed to be evaluated. Our theory behind her delay was that she did not speak because she was modeling Spencer’s actions. We put her in speech shortly after her second birthday.

Due to her speech delay, she qualified for Head Start at the age of three. During her entry hearing screening, she had a result that was abnormal. Eventually, our pediatrician referred her to an audiologist for an in-depth screening, where she demonstrated a mild hearing loss due to fluid in her ears. This result completely surprised me because she never had any ear infections and tested well above average in receptive language. She had ear tubes placed right around her fourth birthday. It’s only been a few months, but slowly her speech is becoming less jumbled and is starting to become easier to understand.

Our two-year-old son followed in her footsteps. While he talked constantly, most of his language was not understandable. Shortly before his second birthday, I asked our trusted speech therapist how many words he should be able to say. She replied, “I knew you’d be asking me about this.”

This time I was prepared. We suspected that he had the same issue as his sister, so we signed him up for speech and got a referral to our ENT. He had his ear tubes places about a month ago and is already improving.

Someday, my children will be able to communicate better. The younger two should outgrow their delays. Spencer will find a way to communicate that works well for him. It will take time, patience, many speech therapy sessions, and perhaps even a cool robotic voice, but they will get there eventually.