Top 5 Myths About Medicaid and Kids with Disabilities

Most people don’t seem to realize just how important Medicaid is for kids with disabilities. In this article, I hope to dispel some of the myths about Medicaid that are commonly held by many Americans. As a parent of a child who relied on Medicaid for eight years until her death in 2014, I learned firsthand just how critical this program is for children with disabilities. Not only is Medicaid a lifeline for these children, whose medical expenses are extremely high and not fully covered by private insurance, but it is also the primary payer nationwide for in-home care services that allow children with disabilities to live at home. 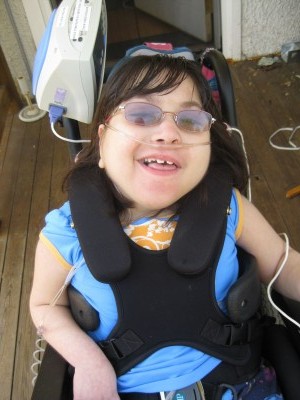 While kids with disabilities are expensive no matter what, it is much cheaper to keep them living at home by giving them Medicaid coverage than it is to permanently hospitalize or institutionalize them. In other words, Medicaid reduces the overall costs of care for these kids to taxpayers, often by millions of dollars. For just my daughter alone, I estimate Medicaid saved taxpayers $3.3 million dollars by providing home nursing to her!

In this article, I hope to dispel some of the myths associated with Medicaid so that everyone can understand just how important this program is for children with disabilities.

Myth 1. Medicaid is full of welfare queens and other people gaming the system.

This is probably the greatest misconception about Medicaid — that it is filled with adults who refuse to work or are just gaming the system. It is a myth not based in any bit of reality. In fact, Medicaid primarily serves children, people with disabilities, and the elderly. Of the 80,694,100 Medicaid enrollees from 2014, 66% were children, the elderly, or people with disabilities.[1] 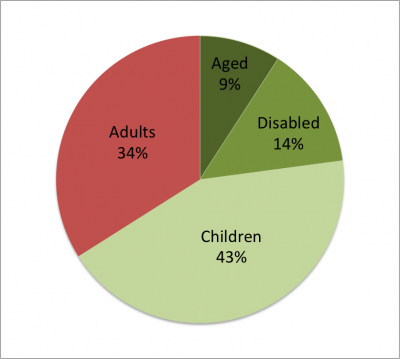 Of those who are non-disabled adults, 78% are in working families, meaning at least one adult in the family is employed, primarily in jobs that do not provide health insurance.[2] Of the remaining adults who do not work, virtually all of them fall into one of four categories: sick or partially disabled, a caregiver, a student, or a retiree.

Most Medicaid enrollees are children, people with disabilities, or the elderly, and these individuals typically have no other options for coverage due to their ages and conditions.

Myth 2. Medicaid is only for poor kids.

Medicaid does provide health services for healthy kids from low-income families, but it is also a critical funder of care for children with significant disabilities and medical conditions of all income levels. Medicaid and the Children’s Health Insurance Program (CHIP) cover 44% of children with special health care needs, and the greater the child’s needs, the more likely he or she is to have Medicaid.[3] Of the nearly 3 million US children with the most significant disabilities or medical conditions, 60% receive Medicaid or CHIP coverage.

There are three general methods of providing Medicaid to children who do not qualify for the program financially, and all states offer one or more of these options.[4] One is through a state option that simply extends Medicaid to children with disabilities, often called a Katie Beckett state plan option or TEFRA option. Another is through home and community based services waivers, often called 1915(c) waivers or Medicaid waivers. Finally, a few states also allow families of kids with disabilities to buy in to Medicaid through the Family Opportunity Act. All of these programs are intended for children who otherwise would have to live in a hospital, nursing home, or institution if they did not receive Medicaid. These programs can provide stand-alone Medicaid coverage or wrap-around coverage for those who also have private insurance.

Some may wonder why children with disabilities would actually want Medicaid, especially those who have private insurance. Private insurance typically does not cover a lot of the services and equipment children with disabilities require, such as home nursing care, personal care services, therapies, enteral nutrition, and mobility equipment. On the other hand, Medicaid offers a more robust package of services and coverage, especially in the case of children. The Early and Periodic Screening, Diagnostic and Treatment (EPSDT) provision of Medicaid makes sure that children receive ALL medically necessary care through Medicaid. For example, my daughter received home nursing care, oxygen, therapies, some medications, and some medical equipment through Medicaid, all of which were denied in whole or part through her private insurance.

Myth 3. Medicaid spends all of its money on healthy adults instead of people with disabilities. 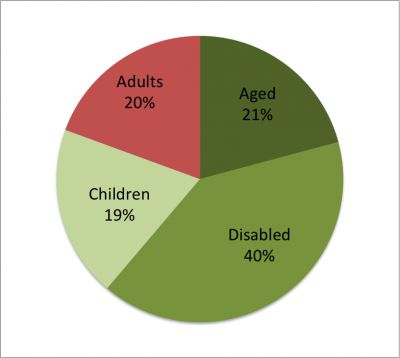 Myth 4. We’ll never need Medicaid because we work and save our money.

We are always just one birth, one lost job, one accident, one fall, or one diagnosis away from Medicaid. Even the best planning in the world cannot necessarily prevent you from needing Medicaid.

Take my family, for example. Before my daughter Karuna was born, we had everything in place: stellar private health insurance, disability insurance, life insurance, and a healthy emergency account for unexpected expenses. We had steady housing and employment, with my husband working as a physician and me as a lecturer at a university.

And yet, after our daughter’s birth, during which her umbilical ruptured, we needed Medicaid. Her care — especially in her later years — required home nursing at a cost of $262,800 per year, more than double our income. And our initial stellar private insurance plan paid not one penny.

In other words, unless we earned more than half a million dollars a year, we would need to rely on Medicaid no matter what we did. There was no other option, as any option we chose would lead her to Medicaid.

In reality, most of us will end up on Medicaid at some time or another. Currently, Medicaid covers 1 out of every 5 people, and 2 out of 5 children.[7] More than half of adults turning 65 will need long term care in their lives, including either nursing home care or specialized care provided in the home.[8] For those with significant disabilities or medical conditions, Medicaid is the only payer for this care, since Medicare and private insurance do not cover long term care. Even those with long term care insurance who develop significant conditions will still likely end up on Medicaid, since these policies usually only cover care for 2-5 years.

Myth 5. If people have kids, they should be responsible for their medical expenses instead of relying on Medicaid.

While this myth is more a philosophy than a matter of fact or myth, it is nonetheless an unreasonable expectation. As explained above, catastrophic events can occur in any family, and we are all just one birth, one accident, or one diagnosis away from one. Even families who do absolutely everything possible to prepare for a child financially cannot handle the expenses associated with a catastrophic condition or disability. In our situation we had two working parents with an excellent combined income, great health insurance, housing, and even a well-stocked emergency fund, but nothing can prepare you financially for a child who needs $100,000 or more in medical expenses per year that are not covered by insurance.

In my state, the average annual cost to Medicaid for children with significant medical technology (trach, vent, or central line) is $139,846.[9] The average cost for an individual with a developmental disability in a state institution anywhere in the US is $196,735. It is simply unreasonable to expect any family to be able to shoulder these amounts, no matter how many jobs family members are working. And if you think your church family will kick in or fundraise that amount, year after year, you are sadly mistaken.

It is simply a fact that 99% of US families would be unable to pay the more than $100,000 in uncovered medical expenses that are required to care for children with significant medical issues. Families in this situation either need to accept help from Medicaid, give their children up to the state, or allow them to die. Most of us believe it is our moral responsibility to help others, and not let children die from conditions that are treatable with proper care. It is morally reprehensible to decide whether a child lives or dies simply based on how much money the child’s family happens to have.