Tomorrow marks the two-year anniversary of my son’s last seizure. That was the seizure that did not stop. He had a fever that day and I had given him a bath to relax him because a fever with cerebral palsy causes that oxymoronic state of both tight and shaky limbs. I had laid him down in the living room and was in the middle of pulling on his spider man pajamas. His foot got caught in the cuff and began to violently tremble. I thought it was because he was cold. But then the shaking did not stop. He because to thrash and then gurgle with the excess saliva collecting in his throat. 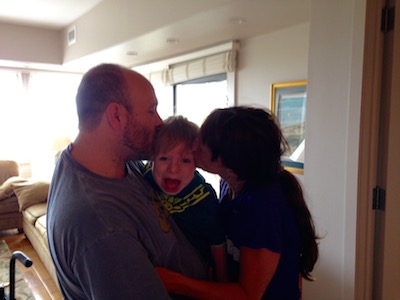 I sat him up, with his legs still half in his pajamas, and hugged him like I could still these waters with my hands. And then I got my wits about me and laid him on his side so that he would not choke. I kissed his sweaty head because it was the only thing I could do while my husband called 911. The fireman came and then the emergency responders. They gave him oxygen and a lot of sedation. Halfway to the hospital, I watched through the tiny porthole view from the front of the ambulance as he took another downhill turn that merited the siren and lights (you never want to get to that point).

It was a long few days in intensive care with spinal taps and intubation and EEGs all to tell us what we already knew. It was a really bad seizure. In the middle of it, my inner monologue poked at the unsolvable problem like water in a clogged drain. What if I had given him Tylenol sooner? What if I hadn’t given him that bath and whacked out his temperature? What if we hadn’t called 911? There were so many questions with no real answers. I had a lot to think about as I sat on that vinyl chair next to his bed. I wanted a fix. I wanted him to wake up and be himself again instead of the limp rag the seizure had created…a body wrung dry from exhaustion.

He did wake up and he did return to himself and we did start medicine to manage the seizures. It has been two years, the magical number in neurology when they say you “graduate.” But when his neurologist asked me if I wanted to go off the seizure meds, I said no. Because I’m still scared. Because it could be the only thing keeping the earthquakes at bay.

I hate feeling ineffectual, helpless, worn out. As a mother it bruises your heart to watch your child hurt. Whether it is a fever, broken limbs, or mental illness, it feels unjust, like the world ought to grant the young ones a pardon or at least give you the key to fix it. You raised these people, shouldn’t you be able to participate in their repair?

There have been no more fevers that turn into shakes. But when the everyday fevers do hit or he lets out a cough, I catch myself peering at the edges of our world, trying to catch the sickness still there, waiting off stage.

It’s a hard thing to trust in miracles, even modern medical miracles where you can see the cause and effect. I think the only way to let my bruised heart unclench, to keep the fear at bay, is to acknowledge the moment two years ago that brought us here and then to give thanks for all the moments we have had since. I can only live this day today and so I will. I do not know the future for our family and my worrying will not change it.

So on this anniversary eve, I am issuing my mission statement for motherhood: I will remember the past, leave the future to itself, and give thanks for the present. We cannot be both soft and strong for our children if we let fear of what has been and what might be steer the ship.

Jamie Sumner is a mom to a son with cerebral palsy and twins. She writes with humor about infertility and special needs parenting on her website http://mom-gene.com. Her articles have appeared in Complex Child Magazine, Parenting Special Needs Magazine, Parent.co Magazine, Tribe Magazine, Her View From Home Magazine, and Literary Mama.