Tube Sites: The Do Nothing Approach

Those were the first words I heard from the PICU nurse about my son. At the time he was unconscious and on a ventilator, but I understood what the nurse meant.

My son is nineteen years old and has had a G-tube for over thirteen years. I know from talking to other parents that keeping the site clean and healthy can sometimes be a challenge. Just days before he was admitted to the hospital I was taking pictures of Maxie’s belly to share with a fellow parent in an online group. The other mom had told me that skin around her son’s tube looked red all the time. The G-tube site is a constant topic online, and I have heard from many families over the years that the skin is usually red or that there is leakage around the tube site. 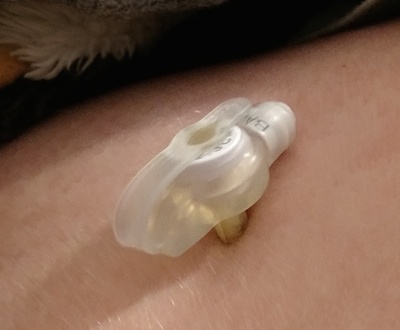 I know there are several options available to keep some type of covering over the area, but we were advised against covering the skin with anything and haven’t encountered any of the common problems. I’m not sure how we got so lucky, but we’ve never had any issues with redness, granulation, leaking or infection.

I attribute this mainly to the doctor and the advice that he gave us, which for the most part I followed. He told us to treat it like an earring hole, and after the initial wound healed to leave it uncovered all the time and twist it around so the skin wouldn’t grow back around it. That’s it.

I followed his instructions, but I initially used Neosporin with painkiller on the site until it was completely healed. My son’s doctor actually told me not to put any type of ointment on it but I love Neosporin and didn’t see the harm. I’m not advocating going against doctor’s orders, but this was just something I decided to do mainly because there is a topical painkiller in Neosporin, and I didn’t want my son to have any more discomfort than necessary.

I’m not bragging, but over the years I have received compliments from every health care professional who has had the occasion to see Max’s G-tube. When you have a child with multiple and profound special needs I guess you take the compliments wherever you can! If you have a child with any special needs you’ll understand that sometimes any positive reinforcement about the care we’re giving our children is extremely encouraging to a parent trying to navigate through the oftentimes new and unchartered lifestyle.

I never thought much of it, but over the years through social media the special needs world has become so easily accessible that I am in contact with people all over the world on a daily basis, and this G-tube issue is a common theme. Since everyone seems to think that Max’s G-tube site is really amazing, I definitely want to pass on the information we were given so long ago.

I can’t even remember why I was so worried about the fact that one day Max would need this miracle of modern medicine, because for our family it’s just part of the daily schedule. The way he gets nutrition by having a feeding tube has improved Max’s life beyond measure.

Ilyce Randell is the mother of two children, one typically developing 14-year-old boy named Alex, and one 19-year-old boy named Max who was born with Canavan disease. She has been working to help families affected by Canavan disease for over 19 years by advocating for patient rights, raising money for medical research and increasing awareness about Canavan disease. Ilyce has recently launched the world’s first international Patient Insight Network (PIN) for Canavan disease through a partnership between AltaVoice, (formerly PatientCrossroads) and Canavan Research Illinois. This tool is critical for advancing research and networking patients worldwide. Ilyce is also the President, Director of Patient Advocacy, and Cofounder of Canavan Research Illinois and Canavan Disease Research. You can read her blog War Stories from Holland.