A Child’s Grief: Explaining Death to Children with Special Needs

My emotional life involves a lot of talking. I was sexually abused as a child and kept the secret well into my adulthood. Holding in that pain took me to some dark places in terms of depression and anxiety and so now I don’t hold back much. I am most secure around people who can make room for my feelings. I am drawn to people who are willing to share the life experiences that inform their behavior. Understanding someone’s pain and joy helps me to be more empathetic. 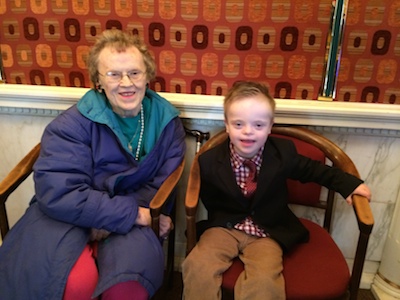 Enter my eight year old son Bobby, who has Down syndrome and is largely non verbal. The words and phrases he does use mostly reflect his wants and needs. Certainly he is more than capable of expressing his displeasure with day-to-day inconveniences, but his deeper emotional life is largely unknowable to me. My task, then, is to appropriately tend to Bobby’s emotional needs even though I am not getting the sort of conversation from him that I rely on from others.

The greatest challenge I have had in this regard occurred a year and a half ago when Bobby’s beloved Aunt Lucille passed away suddenly. Explaining death to a child is a hard task under any circumstances. Bobby’s inability to provide direct feedback only compounded the difficulty. I could do my best to explain the situation but would not have the opportunity to correct misunderstandings or answer questions.

I considered telling him the story of God and angels. However, our family doesn’t practice a religion and I didn’t want to tell him a story I don’t believe just because it would save me some angst. Moreover, tying up a momentous event into such a story doesn’t leave much room for Bobby to experience his own feelings. He is not sophisticated enough to balance Lucille’s salvation and his own loss. Honestly, most of us aren’t sophisticated enough.

I also firmly believe that part of an inclusive life for Bobby involves him experiencing the pain as well as the joys of living in this world. I have lost my parents and a sibling. I know the hole that is left, but I have learned to have faith that time lessens our pain and allows us to find happiness even as we live with loss. Bobby will face other losses; he needs to develop a patience with experiencing grief.

So I explained Aunt Lucille’s death to him the best I could, telling him that we all loved her but we wouldn’t see her again. My family did a private visitation where Bobby first told his aunt to “wake up,” but then studied her for a long while, eventually breaking his connection to her body. Whatever he understood about what happened to Lucille, he did seem to get that her body in that state was different than the spirit he loved.

Then I waited and watched. Of course what I wanted to do was to talk about the death with Bobby, but I tried to be conscious that revisiting the loss satisfied my needs, not his. Obsessing over the topic with him was more likely to create anxiety than comfort. Instead, I waited for him to express his emotions as he felt them.

For weeks after Lucille’s death, Bobby cried every Sunday morning at the time when we traditionally had taken his aunt to brunch. He was sad when we visited her house to check for mail and phone messages. I resisted the urge to distract him or try to minimize the situation at these times, instead just being present with him.

A year and a half later, Bobby’s resilience has seen him through the months after Aunt Lucille’s death, but I don’t have any real idea about his understanding of what happened. At his age, I had only lost distant relatives and I understood death as something that made my parents sad for a few days. I hope Bobby doesn’t equate death with his mother emotionally hovering around him for weeks, but who knows? I am just muddling through with my belief that emotions are healthiest when they are out in the open, even if they cannot be spoken.