One in a Million Kid: HSAN Type 2

One in a Million Kid. That’s my Sophie. Long before the name was popular, Sophia was a unique name that fit my daughter in a million different ways. 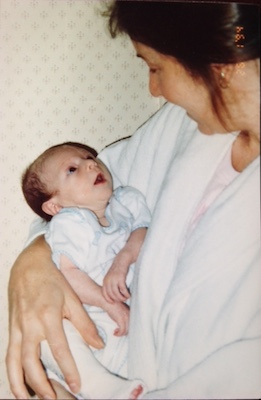 My Sophia was named after her maternal great grandmother, a woman who to me was “one in a million” herself. My family entered the world of special needs on December 28, 1993. Little did I know the impact this infant would have on myself and the people she touches, the village that has helped me to raise her. Now a young adult, we recognize the miracle that she is, and the hard work that got us here today. Not an easy life, but one we have fought to hold onto and to rejoice in the accomplishments. The small moments that you look back on and realize are the big moments. The big moments that don’t always work out like you imagined they would.

Despite having trouble maintaining a pregnancy and needing to be on bed rest, Sophie arrived at 37 weeks with good Apgar scores, but had clubfeet, a sign of neurological issues. Whisked away, she needed help with feeding and there were other signs of things that were not “normal,” so she was then moved to a larger hospital.

This was not what we had envisioned. I was one of those soon-to-be moms who wanted natural childbirth, wooden toys, and breast-feeding. Nope.

Having been healthy my whole life, hospitals were a foreign place. Sophia landed in the NICU of a major hospital in Chicago. I spent 21 days and most nights with her while they poked and prodded, analyzed and debated why this “mystery child” of the unit would fall asleep any time there was an invasive procedure or stress. Her heart rate and respiratory rate would go down. She had failure to thrive, and needed an NG-tube to feed formula and breast milk to her. We took her home after a wonderful Physical Therapist taught Sophie how to suck. The so-called “fainting” spells still continued. 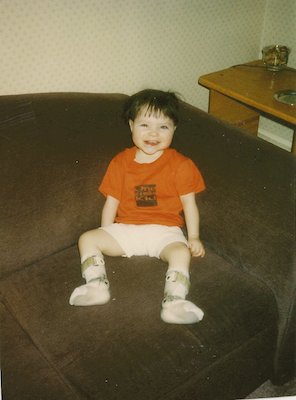 I look back and wonder at our bravery. Many doctor appointments, surgery for her clubfeet, therapies, and a negative test for Muscular Dystrophy finished out most of her first year of life. She had what we thought was colic, but was really a sign of something more insidious.

Getting casts off of her skinny legs and being cut (accidentally of course) to the bone revealed what we had been suspecting: Sophie didn’t feel pain. At this time the go-to test was a sural nerve biopsy from the calf that was sent off to Mayo for analysis.

This test confirmed she had Hereditary Sensory Autonomic Neuropathy (HSAN) type 2, a disorder of impaired sensation. There are 7 to 9 different types, depending on the research and researcher. The disorder is in a family of disorders that were all very confusing, and some were degenerative. Prognosis was unknown, as it was so rare. Little to no information was found, as this was pre-Google days, and medical information was hard to come by. And yet I persisted, looking for information to help this precious little one.

We took a trip as a family to Mayo for all of us to be tested. There was no history on either side of the family, but 50 years prior there was no way an infant would have survived what we had gone through to this point. Since it is considered a double recessive disorder (coming from both sides of the family) the news was devastating to the whole family. Both sets of grandparents felt responsible.

The few people we know with this diagnosis are varied. Some walk (not well with all the injuries to their bodies), and some talk (not clearly as they have done damage to their teeth and tongue). Some have sight issues from the damage to their corneas from abrasions, as Sophie does. This life is not easy on the body. Most have some form of scoliosis or lordosis (curvature of the spine). Sophie cannot walk without full support and uses a wheelchair most of the time. She uses a talker to communicate and wears specialized contact lenses to protect her eyes. She would not be alive without the use of amazing technologies that have been developed in the past 30 or so years.

There is no clear prognosis for HSAN type 2. Those that have come and gone before us most likely died from an infection that wasn’t caught, or doing something dangerous because they didn’t know better. While many individuals who are medically fragile individuals need assistance most every hour of the day, Sophie’s health needs and safety truly are 24/7.

What is a life without pain? While so many of us search for ways to help us put out the fires of pain, I can tell you that the pain you feel is a great teacher. Feeling the heat from the flame on your stove, you pull away. That cut you just received you’ll watch to be sure it doesn’t get infected. That broken bone you got tells you to stop what you are doing. All of these things are not in Sophie’s world. 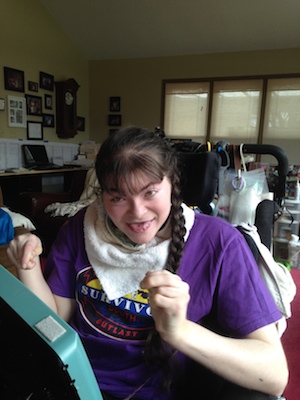 To live with a child with this disorder, you are the consummate “helicopter” parent. Every sharp corner, every sharp object, every day you watch and watch and watch. You try to let them be kids, but at the end of the day, you do a full body check to look for issues. A fever could mean nothing or it could mean death from an infection that you didn’t catch fast enough. You are on a first name basis with the X-ray machine, and sometimes the cure for broken bones is worse than the break itself. I have had my hands X-rayed more times than I can count while I hold this beloved, strange creature in my arms to get the perfect shot. Speaking of shots, she is a nurse’s best friend. Any amount of poking and prodding has no reaction. I smile as I watch the nurses take a deep breath or count when giving shots—they are meaningless to Sophie.

Then, to add to the confusion, she feels extreme visceral pain in her GI tract. The early years were a jumble of confusion and frustration while we tried to understand why this child who couldn’t feel pain and couldn’t cry tears, was clearly in deep pain in her gut. Always having issues, she was finally diagnosed with pseudo-bowel obstruction. This was after they literally took her bowels out of her body to find a blockage, only to find none. That was the beginning and the end of our adventures with feeding. All slight infections and feedings led to pseudo-bowel obstruction, an incredibly painful condition.

Then seizures developed. Then a sleep disorder. Life was a constant roller coaster in and out of the hospital for lengthy stays. The central line that was to be temporary became permanent, and is her lifeline continuing today, giving her TPN (total parental nutrition), lipids (fats), most medications, and hydration. In her later years we have found a few supplements that she can tolerate and that have made her GI life much easier. She is a happier and healthier person from the interventions that took years to find.

Without the help of so many she wouldn’t be alive today. She is an amazing soul who loves YouTube, reading (yes, she can!), music, animals, and her family. She has made me a stronger person than I ever thought I could be. We have met people who inspire us and teach us every day. And Sophie teaches and inspires those who get to know her. I relish the days of happiness she has now, especially since in her early years I wondered if we would ever get to this point. Most importantly, she is happy—what every parent wishes for his or her child.

Jody Prunty is mother to two amazing souls, one being her medically complex daughter, Sophie. Jody is a sometime blogger. You can follow her at www.oneinamillionkid.wordpress.com.