Two Vents, a Tent, and a TRACH!

My son, Adam, was 16 years old when he got his trach. In spite of being born with Spinal Muscular Atrophy Type 2, he had only used Bipap when extremely sick and in the hospital. He was also extremely active. Our days were spent driving him from his youth theater rehearsals to Boy Scout meetings, where he was a Life Scout working toward his Eagle Scout. We went camping in a tent fairly often, but we were pretty sure this was no longer possible when his doctor said he would die if we didn’t give him a trach after a very severe episode of respiratory failure left him unable to wean to Bipap. 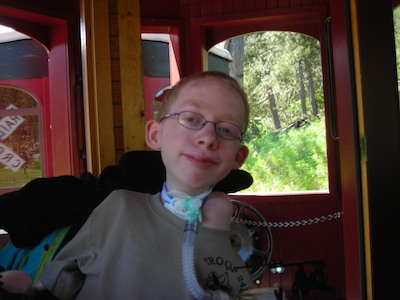 He spent three months in a combination of hospitals and rehab centers while we learned to care for his trach and operate his vent. I was so very overwhelmed with learning how to use all of his equipment. We now had two vents, a suction machine, a pulse oximeter, a feeding pump, and oxygen that needed to be in our possession at all times, along with a ton of supplies.

It wasn’t long before he wanted to resume his previous activities. Theater would have to wait until the next production since he was still in a rehab facility for auditions. While he had figured out how to talk with a trach, his singing voice still sounded like Kermit the Frog.

That left Boy Scouts. We started attending the Tuesday night meetings, and his troop was busy planning a weeklong trip to go camping in the Black Hills of South Dakota. One day in May, he turned to us and said, “I want to go to South Dakota with my troop.” My husband and I looked at each other in shock. We had never even spent a night away from home since he had been released from rehab in late March. How were we going to go camping in a TENT? In a month!?

Camping with a Trach and Vent

We started researching our options. Was it possible to have electric access? Was the troop camping in an accessible spot? Was there a hospital close by? Would our supply company be able to get us additional oxygen if we had to use the two tanks we were bringing?

All of our research was saying this trip was definitely a possibility! We talked to his pulmonologist, who said that he felt it was safe as long as we had oxygen with us and would go to the nearest hospital if we ran into problems.

I was pretty sure this was an insane idea. I was terrified that I was going to forget something and kill my adventurous, power wheelchair-using, trached, ventilator-dependent son. Never the less, we loaded our portable PICU into our full sized van and joined his Boy Scout troop on the 12-hour trip from our home to South Dakota. 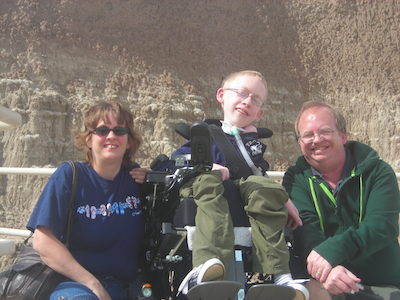 On our first night, we set up our tent and all of the equipment that would turn our tent into a portable PICU. We had plenty of extension cords and lots of boys to help unload supplies and get everything set up. There was only one thing we hadn’t counted on. His vent he used at night required a bag of sterile water to operate the humidification chamber. But the nights were still cool and we had left the sterile water in the unheated tent. We went to bed and turned on the vent. The water hadn’t had time to warm up and Adam was having trouble breathing. We moved him back to his chair and his daytime vent and sat in the heated van while we decided what to do. Should we take him to the closest hospital? Pack everything up and go to a hotel?

As we sat in the warm van, Adam began to feel his lungs relax and he was able to breathe easily. He wanted to try again. The vent had been running with the humidifier on while we had tried to figure out what we should do. This time, his lungs were fine and he made it through the rest of the night. We learned that it was important to turn on the vent and humidifier a half hour before bedtime so that it had time to get the water to the right temperature for Adam.

The rest of the week was uneventful. We spent a great week with his Boy Scout troop at Mt. Rushmore, the Badlands, Custer State Park, and on a train through the Black Hills. There were a couple things that Adam couldn’t do because of his power chair, but we found other activities that he could do. Our favorite was driving the wildlife loop at Custer State Park.

While I was honestly terrified to even try this trip, it turned out to be a great trip. It was a great way to get over my fear of traveling with Adam and all of his medical equipment. It also helped Adam come to terms with his trach. He now knew that it would still be possible for him to enjoy life with a trach.