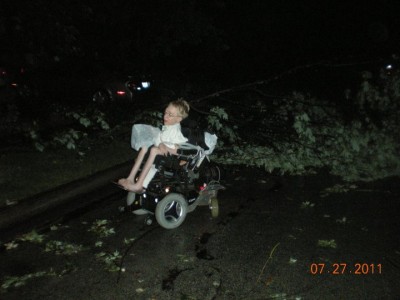 Natural disasters are events that happen to other people. They certainly don’t happen to families with special needs family members. Surely they have enough to worry about without dealing with a natural disaster.

Believe it or not, my family has been in four—count them FOUR—natural disasters in the last 10 years. Twice we have been in violent storms and twice we have had to deal with our neighborhood flooding.

My son Adam has Spinal Muscular Atrophy. He uses a power chair and a ventilator. He has got to have access to electricity. His life depends on it. Because of his fragile state, we have always known that we have to have a plan B in the event that power goes out for more than a few hours. We knew how to get to the closest fire station, police department, and the closest hospital.

One night our entire emergency plan was thrown out the window. Adam and I were watching television close to midnight. My husband had gone to bed since he had to get up for work at 5:30am. Adam is a night owl and doesn’t go to bed until very late. Our night nurse had taken the night off. That left me to stay up with him. It had started to storm. Adam doesn’t like storms since he is unable to move when he is out of his wheelchair. Being totally dependent during a storm really scares him, so I let him stay up until the storm quieted down.

All at once we heard a huge noise. The noise was indescribable. Within seconds of the noise our power went out. I yelled for Adam to get in the hall, which is the only place we can go in bad weather. We closed all the doors and protected ourselves with whatever pillows we could grab. My husband heard the power go out and came running out of the bedroom to help me. We were huddled in the hall with our dogs when my cell phone rang. It was my next-door neighbor.

“Are you guys okay?” she asked.

“There is a tree on my house!” she screamed. She looked out her window and a tree had fallen on her house. Of course, her primary concern was making sure we were OK. 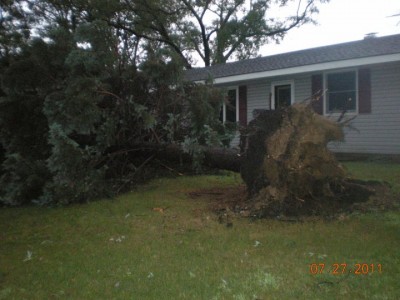 We went out to the living room and looked out the window. As far as we could see, the street was lined with downed trees. As soon as it was safe, we went outside to assess the damage. Considering it was 2 in the morning, there were a lot of people outside checking on their neighbors to make sure they were OK. This was fortunate for us, because we still had no power and Adam only had about 8 hours of battery left to run his ventilator.

As you remember, we had planned to go to the police or fire station in the event of a power outage. But our entire neighborhood was covered in downed trees and there was no way to get out. In addition, the power was out all around us. The guy who took care of our lawn had rushed over to see if we needed help. He was far enough away that he had power. We sent him home with extra batteries for Adam’s vent and the charger.

Ultimately, we were without power for almost a week. We didn’t have a generator; one of our neighbors gave up their generator so that we could have enough power to keep Adam at home.

The Importance of a Plan

Here are other things that we learned as a result of this storm:

Know your police and fire departments and be sure they know you have technology dependent family members.

We had done this and the firemen came to do wellbeing checks. In addition, our police department sent a social worker to make sure we were safe and had everything we needed.

Make sure they are aware that a person who is technology dependent is in the home and must have access to power. We weren’t very proactive about this. We didn’t get power back until we stopped one of the utility workers and told them we had someone on a ventilator and needed to know how soon we would have power back. He told us that they didn’t know that there was anyone with special needs in the area. He made sure we had power later that day. We had assumed that since we had our doctors send paper work identifying us as a technology dependent home, they would have automatically known.

It Can Happen to You!

Little did we know that all this knowledge and the generator would again be necessary when another severe storm came through and took out trees and power two years later. This time we were better prepared.