Self-Actualization and Mothering a Boy with a Disability

When I graduated from high school my parish priest reacted to the news that I was valedictorian of my class by debuting a new sermon. He stood on his pulpit in front of thirty parishioners, fixed his eyes on me, and declared that while there was nothing wrong with a woman getting an education, her place in life was as a mother, sacrificing her ambitions for her children. 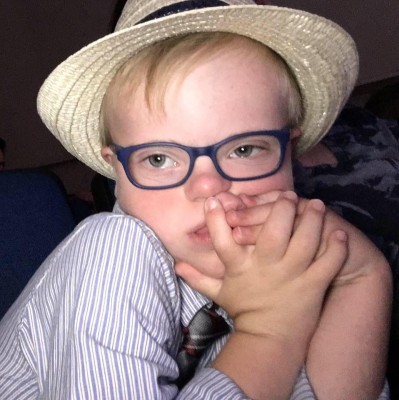 For me, the misguided lesson caused more eye-rolling than anger. I was a couple of months away from physically leaving for college, but my mind had rejected that comfortable-for-them trope years ago. I didn’t believe human beings were a flock to be herded; we all have our unique destiny. I was convinced that a better, happier me was waiting just outside the confines of our small town.

Of course, achieving self-actualization or finding that “better self” isn’t as easy as changing addresses — it takes a lot of intentional work. For me, it has largely replaced formal religion as my guiding principal in life.

Traditional Christianity teaches that we are all born with flaws and the path to salvation is to box up our “evil” proclivities and serve God through obedience and sacrifice. My interpretation of self-actualization is that we are all born with a unique ability to enhance the lives of other people, and we have to purposefully cut through the distraction of a chaotic world to nurture that ability and use it generously. There are no large or small contributions; the only thing that matters is sharing the gifts we have.

All ideals are easier to conceptualize than live out, and I often fail in my quest to be that better self. However, the idea serves as a valuable grounding point when my life shifts as it did when my son Bobby was born with Down syndrome ten years ago. My belief system has informed my parenting in several ways.

Identity is not an obstacle to self-actualization.

I don’t believe anyone is born inherently flawed or with challenges that must be overcome before achieving self-actualization. Obstacles are all people-made and enter our life after we are born. As such, our natural identities cannot be good or bad; they just are.

As a lesbian, I don’t see my sexuality as a thing to overcome or suppress. I believe my best self is a lesbian, too. As Bobby’s mom, I blanch at the Christian idea that he will be rewarded when he dies by being allowed to throw off his disability. Bobby is a whole person as he is, not someone who is fundamentally broken. If he succeeds in becoming his best self, that person will have Down syndrome, too.

Down syndrome is not Bobby’s life purpose.

While some people view Bobby’s disability as him missing something, others give this passive attribute far too much power. I hear, “Children with Down syndrome are angels,” or, “People with Down syndrome are here to teach us how to be kind and patient.” This thinking makes Bobby sound more like a mascot than a human being with will and purpose.

Because Bobby is in some ways noticeably different from others, he may have the gift of encouraging tolerance, but that teaching only occurs when Bobby is out living his life and interacting and influencing the world by pursuing his own goals and dreams. Spreading acceptance is a side effect of Bobby living his best life, not the sole reason for his existence.

Down syndrome is not my life’s purpose.

There is a certain irony to the fact that twenty-five years after a priest urged me to cast aside my ambitions to be a mother, I became a mom that outsiders like to brand as selfless. As in, I must be so selfless to take care of a boy who has so much wrong with him.

The label is laughable. I love my son but I don’t exist for him.

If I allowed myself to identify too closely with Bobby’s diagnosis then his Down syndrome becomes a distraction to me finding my better self. Sometimes it’s hard to be his mother and deal with the social bias that comes with disability. Other times I’m in wonder at how his extra chromosome has connected me with exceptional people and expanded my world in generally positive ways. In either case, whether I’m thinking about the good or the bad, it’s my responsibility as Bobby’s parent to make sure his diagnosis doesn’t take over my life. I can’t allow either of us to be trapped in some comfortable-for-other people trope where disability overshadows everything. He and I would both lose our best self inside that darkness.