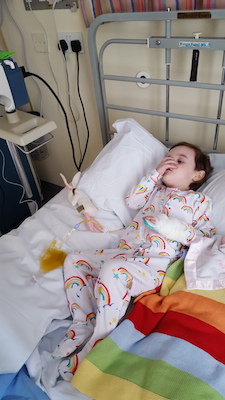 While most children have feeding tubes just for gastrointestinal conditions, my daughter Mabel has hers for both severe reflux and kidney issues. She has chronic kidney stones and Nephrocalcinosis, which require extra fluids.

Mabel was born prematurely at 27 weeks in 2013. She did very well from birth and soon was making steps towards going home. However, one thing of note that she was constantly sick after feeds and was not able to keep anything down, which led to her being tube fed for the majority of the time in the Special Care Baby Unit. After a long three months, she was finally able to come home, but the sickness was still there and she would vomit multiple times a day after feeds. She struggled to gain weight without the nasal feeding tube to feed her since she could not keep food down.

She also had other symptoms that included long periods without opening her bowels. When she did stool, it was very painful as her stools were so large and hard. During one hospital visit she was to have an ultrasound of her stomach to try to identify any issues. During this scan we were told that Mabel’s kidneys were jam packed full of kidney stones and she was suffering from Nephrocalcinosis, which is where there is a thick lining of calcium deep in the tissue of her kidneys. It was described to us as basically having thick wallpaper inside her kidneys.

The surgeon told us that it was extremely rare to see a child of Mabel’s age with kidneys packed full of stones. She needed urgent surgery to stop the stones from damaging her kidneys further. Mabel had two operations five days apart where the surgeon cut through her back directly into her kidneys to remove the stones. Mabel came out of the operations with drainage bags attached to her back, and tubes seemed to be protruding from everywhere. Her kidney problems got worse and the stones returned on multiple occasions, meaning more procedures to remove them. 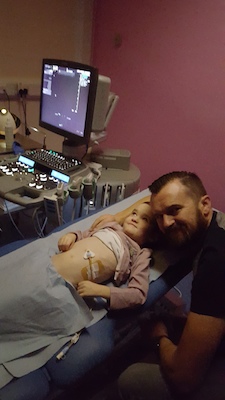 One of the issues with having this condition is you need to have a large daily intake of fluid to flush the kidneys out to prevent the stones from forming. But with Mabel’s severe reflux issues and her poor weight gain, this would have been impossible to do. We also realized that Mabel’s appetite for solid food was nonexistent. We couldn’t get her to even eat the tiniest amount of a yogurt or baby food.

After a period of time, the surgeons decided that the best course of action for both the kidneys and the weight gain was for her to have a Nissen Fundoplication and the fitting of a Jejunostomy. This is a feeding tube that is inserted through her stomach and passed through into the small bowel. She was fed through this tube via a pump for 24 hours a day. Although because of the Nissen she doesn’t vomit anymore, she continued to suffer during feeding and we were referred to a children’s hospital. They changed the type of feed to one that is pre-digested to make it easier to manage.

Living with a Feeding Tube

Tube feeding at the start was a scary thing to get your head around as a parent. Mabel has had the tube for over two years now, and although weight gain is still an issue and food is a work in progress, she is a very happy little girl who takes everything in her stride. “Tubie” has become her friend and she even has a little voice for it. Mabel helps administer her many medications and is good at letting us know if Tubie is hurting. Tube feeding is not something to be taken lightly and can be daunting, but without it Mabel would not be able to survive. 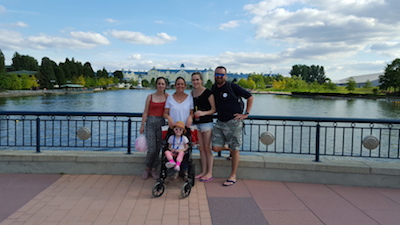 Mabel is five now and has started school. She has to have two feeds at school, which is difficult since it means she cannot take part in activities during this time. However, by working with the school and her wonderful teacher, they have managed to make sure that these feeds are at such a time to offer the least restrictions.

Sometimes people don’t understand why my child has a tube coming out of her and can stare like she is different. I’d give them one bit of advice: come and ask me and I will tell you all about it. You will quickly see that Mabel isn’t different than any other child of her age; she is special.

Mabel will hopefully in time be able to eat and will no longer depend on her tube. Until that time, we put our daughter in the hands of the wonderful surgeons, consultants, dietitians, and the community nurses that together all ensure that Mabel receives the best care possible.