A Cold Isn’t Just a Cold Around Here

I write this as I am sitting ten feet away from my coughing, feverish child. Cold and flu season is still in full force, despite today being the first day of Spring. 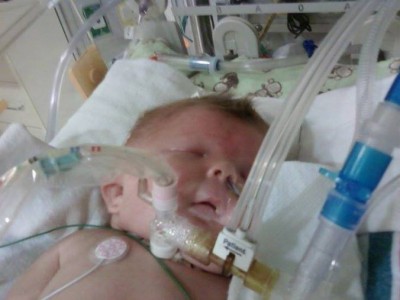 Our youngest son has chronic lung disease. In his seven years, he has been hospitalized several times for respiratory issues that have started with a simple cold. Most people don’t think colds are a big deal, but in our house, it means we go on high alert: watching for fevers, monitoring oxygen levels at night, and watching for any signs of respiratory distress.

It started three days after he was born. He was retaining carbon dioxide in his lungs and no one could figure out why. He was put on a ventilator, on the highest settings, and it wasn’t helping. He was in acute respiratory failure. His only option was to be placed on an ECMO machine — a heart/lung bypass machine that would, hopefully, allow his lungs to rest and heal. It was a last resort type deal. I remember asking one of the many doctors that were crowded around his incubator what would happen if this didn’t work. She put her hand on my arm and told me that we would have some hard decisions to make.

The next week was a blur. We hoped for the best but tried to prepare for the worst. I didn’t even take any pictures of him when he was on that machine because I kept thinking that if he didn’t pull through, that was not how I wanted to remember him — hooked up to life support machines, with tubes and wires covering what seemed like most of his tiny body.

By the grace of God, he made it, only to contract a staph infection in his lung. He was in the NICU for over four months. He came home with a tracheostomy tube, a feeding tube, and a load of medical equipment. Our living room looked like a mini hospital room.

Over the next three and a half years, he would end up in the hospital five times with severe respiratory illnesses. The stays lasted anywhere from ten days to two weeks, all two and a half hours from home. There were many trips to the ER as well, many rounds of antibiotics, and lots of sleepless nights.

Many of these respiratory issues started with a simple cold, and because of the trauma to his lungs, it would affect him worse than a typical child. Ironically, all the times he had to be placed on a ventilator — the machine that helped him get well — it put more stress on his already compromised lungs.

Here’s the thing: what most people see as a minor cold could potentially land my child in the hospital. When I know there is a cold/flu going around his school, I keep him home even if he isn’t showing signs of illness. We do all the right stuff; we wash our hands, we disinfect, and we stay clear of crowded, indoor places during cold and flu season. These last few years we’ve been very lucky, and I hope it stays that way, but that nagging fear will probably never go away every time a cold comes through our house.

Today, he is an active seven-year-old, and we haven’t had any lengthy hospital stays in a few years. He does get more of his fair share of colds, and pneumonia is a common winter diagnosis for him. So far, in the last few years, we have been able to manage his illnesses at home with antibiotics and extra breathing treatments. There is still that underlying fear, though, because we have seen him go from feeling fine in the morning to being admitted to the hospital, barely able to breathe, that same evening.

Jennifer Arnold is a freelance writer living in Northern CA. She is a full time mom and wife who loves to write, to curl up with a good book, experiment in the kitchen, and consume lots of coffee and chocolate.