Life with Aspiration and a Feeding Tube

My one-year-old son, Elijah, has a feeding tube due to a variety of medical conditions, including reflux, tracheobronchomalacia from compression of his airway, and aspiration. While a feeding tube isn’t typically the way any mother intends to feed her baby, without the option of having it, I wouldn’t have my son. 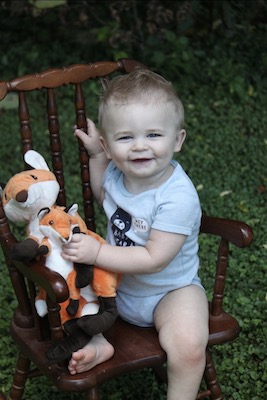 We were thrilled when Elijah, our fourth child, was born. He came into this world strong and healthy, and for the first seven weeks things were going wonderfully. Although Elijah always spit up, I never thought anything of it, other than being normal. To help try and minimize the spitting up, I cut dairy out if my system because at the time I was breastfeeding.

When Elijah began vomiting more and refusing to eat at around seven weeks old, I immediately took him to his pediatrician, who also tried herself to feed him from a bottle. He was screaming, turning away, and arching his back. At that time she thought he may have a condition called pyloric stenosis and immediately sent him to our children’s hospital. Pyloric stenosis was ruled out, but the doctors knew something was wrong and admitted him for observation and testing. He was diagnosed with milk protein intolerance and put on hypoallergenic infant formula.

He still was refusing oral intake so they performed an endoscopy to look at his upper GI tract. He was confirmed to have severe reflux and was given an NG-tube due to his oral aversion. A month later a swallow study showed he was aspirating on all but honey-thickened liquids. His reflux was so severe, and now with confirmed aspiration risks, the doctors suggested a GJ-tube to prevent respiratory infections. This type of tube feeds directly into the small intestine to prevent reflux and aspiration. We contemplated this for two days while in the hospital before his father and I agreed that the GJ-tube was probably the route to take. Elijah was released two days before Christmas with his new feeding tube, but he still was refluxing bile and refusing oral intake despite feeding therapy sessions.

In the winter he was very sick with the virus RSV, experiencing coughing, choking, and gagging. He seemed to have trouble clearing his airway of mucous and was vomiting continuously. His team of physicians referred us to a pulmonologist to get his thoughts about what was possibly going on. This doctor ordered a bronchoscopy and CT scan of his lungs.

We were hoping it was just the RSV causing his issues, but it turned out Elijah was given another diagnosis: tracheobronchomalacia, or a weak airway, due to compression. This explained so much about all of his systems! The CT scan showed enlargement of his pulmonary arteries and compression on his left bronchial tubes due to his aorta; therefore, we were sent to yet another specialist, a cardiologist. The cardiologist did an echocardiogram which showed yet another diagnosis, an atrial septal defect, or a small hole in the upper chambers of his heart.

For all of Elijah’s issues the treatment plan was medication for reflux, medication for his airway issues including inhalers, a pulse oximeter to monitor his oxygen levels, oxygen as needed, and ongoing observation of his heart defect.

Strength through the Journey

Our beautiful boy, despite his diagnoses, is healthy, growing, and in the 94th percentile for growth. He’s happy, so full of joy, and loves his older siblings. He loves to dance and play. He just celebrated his first birthday and he was able to enjoy some of his cake, which we weren’t sure was going to happen.

He no longer requires a pulse oximeter or any oxygen. Lately, he has been drinking and eating more by mouth and we’re super hopeful a tube wean is in our near future. He hasn’t been sick with any respiratory infections since the winter when he had RSV, and he hasn’t been refluxing nearly as often as he use to. He is making progress each and every day!

We’re so proud of how far he has come, and we are extremely grateful for such a wonderful team of physicians, including his pediatrician, pulmonologist, cardiologist, GI doctor, and speech language pathologist, who take such great care of our chubby little boy.

I can’t say this road has been easy. It’s actually been very difficult to explain to some of our family, especially when they don’t comprehend exactly what’s happening or aren’t very educated on what it means to have a child with multiple medical conditions. It’s been a roller coaster of emotions, guilt, and overwhelming questions.

One thing my son has taught me through his journey is to be strong, to be a little less worried about the opinions of others, and to just be the best mom I can be for him and his siblings. The feeding tube literally saved his life and allowed him to get proper diagnosis and treatment. It allowed him to grow and rest, and become strong enough to get better.

To those going through similar cases, there is hope. Stay strong, look at how happy your baby is, and know it’s going to be OK!