Having a child with complex issues is challenging most days, but sometimes, something that you would expect to be OK overwhelms you completely.

My son Ali is 2 ½. He was diagnosed with lissencephaly (smooth brain) at 10 weeks old, and since then life has been challenge after challenge. Seizures, tube feeding, hospital admissions, medications. It has been a dramatic learning curve that I thought I was beginning to get on top of. Until Tuesday. 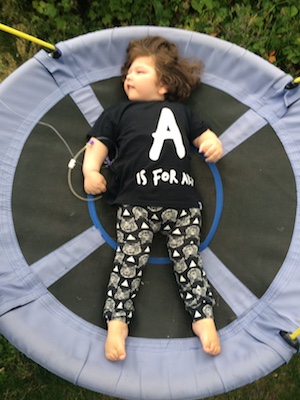 It was the last day of the school summer holidays, so I had to take Ali and my older two children to Ali’s pediatrician appointment. I bought them snacks and coloring pads to keep them busy and thought that I had everything under control.

I took Ali in to be weighed and measured, and then sat down in the waiting room. A nurse walked in and said, “I think this is yours.”

It was Ali’s feeding tube button.

I panicked. I ran over to the nurses’ station and shouted, “His button has come out, is there a nurse that can replace it?”

They looked blankly at me.

One of them, looking shocked, jumped up and took me through to a room with a bed. Luckily, one of the nurses I know saw the commotion and came over. The older two children were looking panicked, and I was trying to get them to sit down and color while also remembering that the surgeon had told me to get something in the hole as soon as possible.

I moved Ali from his pram to the bed. I picked up his old button and tried to push it in. I had never changed his buttons before so I didn’t know if I was doing it right. He screamed and it wouldn’t move. I asked the nurse and she had never placed one before. 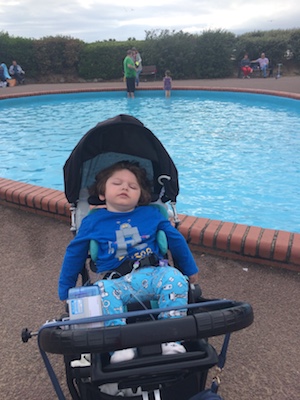 But his hole was closing by the second and I was panicking more and more. My daughter was asking what the matter was, and I was trying to placate the other children while concentrating on what I needed to do for Ali.

I went back to him, opened the packet, and got the new button. I tried to push it in and he screamed. It wasn’t going in. I looked at the nurse and she shrugged. Then she said, “Is there any lubrication on it? I’ll go and get some.” So, she went off again.

One more try, I pushed again, and it finally went in. I quickly grabbed a syringe, got 4mls of water, and pushed it in to secure the button. I gave it a quick pull and it was secure.

Then I started shaking. I managed to get Ali back into his pram and took all three children out into the hall. Once the older two were playing with some toys and Ali had fallen asleep (I think from the shock or pain), I let go. I let myself cry a little.

This experience, although shocking, taught me a few things:

Second, practice for what you would do in an emergency situation. I find listing steps helps me to remember what I need to do for different eventualities.

Third, in most cases you know more than the majority of medical professionals when it comes to your child. Believe in yourself because you can and will do what you need to do. And, because there is not always someone who can help!

I don’t know why that — of all the things that have happened — hit me so bad, but it did. But I managed it. And Ali was OK, as were my two older children. And we moved on to the next challenge.