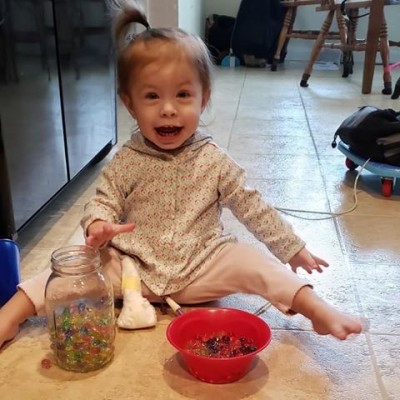 Knowing your child has an underlying neurological condition can be devastatingly overwhelming, especially when complicated by doctors’ disbelief and lack of acknowledgement. Even with a diagnosis, questions persist and answers are hard to come by.

Even in the womb, we knew something was different about our sweet daughter, but our concerns were often brushed off. From birth, it became quite apparent there was some kind of underlying issue. We swooned over her with love, but we couldn’t help but notice her obvious low tone. Doctors continually tried to downplay her symptoms and turn them into more “normal” ailments like reflux. She did, in fact, have reflux, but she showed signs of far more complex issues.

Around four weeks she began contorting herself into a C shape, and there was a clear difference in how she used each side of her body, though it wasn’t always consistent. Her muscle tone remained low, but sometimes it was hard to tell because of how she would tighten her body. Despite beginning PT for supposed torticollis, we weren’t making strides because her C curve would switch sides every few days.

Around three months she began having seizure-like episodes. After her first 24 hour EEG results came back clear, they dismissed her once again as a normal baby, despite the clear hypotonia now evident by her complete lack of head control. The battle for an answer waged on as she continued to have seizure-like episodes. 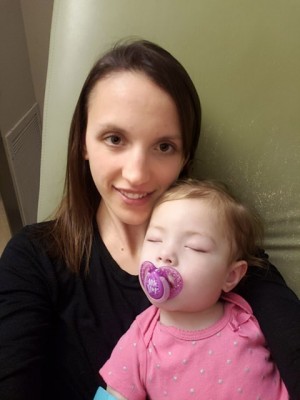 We decided it was best to attempt to treat her reflux with a Nissen Fundoplication and G-tube, but unfortunately things really didn’t get any better. The nutritionist forced bolus feeds despite the fact that she had never been able to tolerate more than one ounce of liquid without vomiting and severe reflux. She remained in the hospital, losing weight and struggling for nine days when they decided to send her home because there was nothing more they were going to do except trial a motility medication.

I begged for a pediatric neurologist to evaluate her before we left. She was seven months old and still not holding up her head steadily. The surgeon assured me she was just different than our other children, who also have complex medical histories, but developing at a normal rate. All he saw was a healthy little baby.

I persevered and upon entering the room, the pediatric neurologist immediately agreed with me and identified multiple congenital anomalies. Despite this, she was still discharged, and we made it home, only to return hours later to a closer children’s hospital where she was deemed failure to thrive, moderately malnourished, and dehydrated.

When they finally placed an NJ-tube, we saw our daughter happy for the very first time. Things seemed hopeful and we received the news that in time she could have her NJ exchanged for a GJ-tube. She actually gained a little bit of strength now that food was staying in her body, and she even began rolling over! The NJ wasn’t a miracle cure, though.

Her seizure-like episodes continued, her hypotonia remained, and her gross motor delays continued. After another clean EEG despite a doctor witnessing her seizure-like episodes and deeming them epileptic seizures, we decided to get a second opinion. Her new neurologist agreed in full that there was something greater going on. There was some culminating diagnosis causing her multitude of issues. 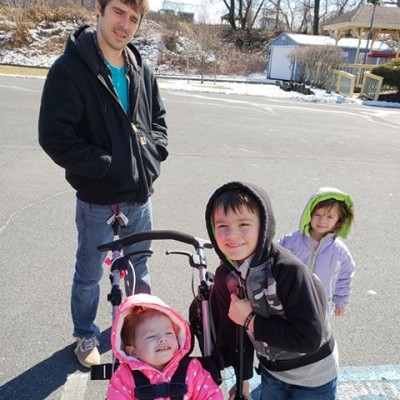 Thankfully, he ran a microarray, and discovered she has 1q21.1 Deletion Syndrome and a 4q31.3 duplication that are causing most of these issues. While it was great to have a diagnosis, it didn’t answer our all of our neurological questions.

What are these seizure-like episodes if they are not seizures? Why does she have so many symptoms of dysautonomia? How do we go about treating these issues that bother her, but nobody really understands? Why does she roll her eyes back in her head?

Finding an answer sometimes means going through millions of hurdles. Sometimes it means getting a second or third or fourth opinion. It surely means you never give up fighting for your child and attempting to find a team that works together well. It also means our plans must be flexible. For our daughter, we had planned to travel to one of the nation’s best hospitals to meet with a team of six specialists. We had hoped to receive more comprehensive care; however, as her condition has become more acute, we have had to learn how to fight and advocate with her current doctors at home without backing down. We’ve learned once again to stand up, keep seeking answers, and push her different providers to work together whether they want to or not.

No matter where, we will keep fighting and seeking, and trying new things to help with the tough neurological symptoms that doctors have yet to understand how to treat.

Sarah is a homeschooling mom to three children with varying medical, special, and complex needs. After she earned her B.S. in Elementary Education, she decided to stay home to fight for her son. The fight continued for her daughter, and continues once again for her child with the most complexity, Cecilia. Sarah enjoys spending time outdoors and treasures the down time with her children and husband in between appointments, therapies, and hospitalizations.