Why You Need to Get Your Child Standing!

Note: This article is a revised version of an article originally published in 2010. 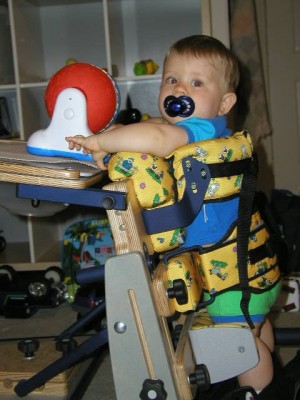 These are just a few common problems that plague children with cerebral palsy and other disorders that prevent or restrict independent ambulation. But what if you could prevent or possibly improve some of these problems in as little as 30 minutes a day?

It may sound too good to be true, but it really is not. Almost all of the above-listed problems can be improved and sometimes prevented by a very simple daily intervention: standing or bearing weight on the legs in a standing frame.

The Benefits of Standing

There are numerous benefits to standing, some of which have been evaluated scientifically and others that have been noted anecdotally by children and adults using standers. These are just a few of the potential benefits:

Some of these benefits are strongly supported by quality research studies. For example, standing can increase bone mineral density in the spine and femur, a very important benefit that may prevent fractures, pain, and surgeries in children. Children with cerebral palsy and similar conditions often do not walk or bear much weight on their legs, leading to thinning bones (osteopenia and osteoporosis), and often progressing to fractures, pain, and weakness. Thinning bones may create a vicious cycle for children, in which thinning bones lead to fractures, which lead to periods of immobilization and deconditioning, that ultimately lead to more thinning of the bones and more potential for fractures and overall decline.

While bones may thin due to a lack of weight bearing, malnutrition, and certain medications, bone thinning can be prevented or improved by a daily standing program. Studies have shown increases in bone mineral content in the vertebrae, femur, neck, and spine.

There is also some evidence that standing reduces spasticity and stretches the muscles in the leg. Studies have demonstrated that standing for as little as four hours a week for six weeks can lengthen hamstrings. Preventing contractures of the hamstring can reduce the need for orthopedic surgeries, including hamstring lengthening, and may help to reduce spasticity.

These studies, along with caregiver and therapist reports, also document improvements in overall wellbeing, pain levels, breathing, the ability to sleep, bowel and bladder health, and a greater ability to interact socially. 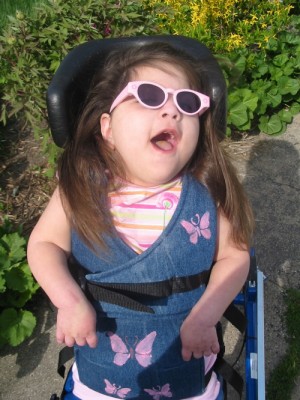 Most children are able to stand, given the right type of stander, integrated supports within the stander, and appropriate braces and orthotics. Children with mild to moderate physical disabilities should be able to use an upright or prone stander. A prone stander, which leans the child forward slightly, can be helpful in improving head and hand control for certain children. Children with greater physical involvement, typically with little or no head and trunk control, usually use supine standers that recline them back slightly.

For children who are young or whose needs could change, it may be appropriate to purchase a three-way stander that allows prone, supine, and upright standing. In addition, the stander you choose should be able to adjust in height, so it can be used for many years as your child grows.

Good quality standers can be outfitted with custom supports individual to each child. Different headrests, lateral supports, trunk vests, knee supports, thigh supports, footplates, and other similar supports can help position even children with significant physical involvement. More adaptable standers can accommodate children with contractures, scoliosis, leg length differences and similar issues, since each element can be adjusted independently. Even with built-in supports, some children may still need to wear a head support or trunk support vest (TLSO) in a stander, and most children require the use of ankle supports like AFOs or SMOs while in a stander.

Children typically stand for 30 to 120 minutes per day, though some children who use dynamic or mobile standers may stand for greater periods. In general, longer periods of time should be broken up, such as standing for 45 minutes twice a day instead of all at once. The child should be positioned as upright as possible. Children may begin using a stander as early as about 10 months, when a typically developing baby is beginning to pull to a stand and cruise.

A physician and physical therapist should evaluate all children before beginning a standing program. There are some cases when children should not use a stander, including diagnoses of severe osteoporosis, severe scoliosis, or in children with significant contractures. Children whose hips are completely subluxed or out of their sockets may also not be able to stand. Finally, some children may experience a drop in blood pressure when standing, may have difficulty breathing, or may experience significant pain in a standing position. While standing may actually help to improve these symptoms in the long run, standing may be very difficult for these children.

While most children love their standers, some children are initially reluctant to stand, especially if they did not begin a standing program by toddlerhood. Similarly, some parents have difficulty placing their children in the stander, as some standers do resemble medieval torture devices. In these cases, start slowly and hopefully over time your child (and you!) will learn to enjoy standing.

Make sure the stander has a tray or can be pulled up to a table. Your child will definitely enjoy the experience more if he or she has an activity to do or is included in some form of social interaction. Most children can trigger cause and effect switch toys in a stander. Some children really enjoy watching television or a movie while in the stander. Still others enjoy doing art projects or simply interacting with a sibling at eye level. Always try to associate the stander with positive activities and pleasure.

Keep sessions brief at first. Five minutes may be the maximum for some children, especially those with anxiety, sensory issues, or who have never stood before. Gradually increase the time as tolerated.

If your child screams while in the stander, have a physical therapist check the stander and the child’s body to ensure he or she is positioned appropriately and nothing is causing pain.

Medicaid usually covers standers for children, but insurance companies can sometimes be stingy in approving them. Other options for coverage may include Early Intervention programs and Title V programs for children with special health care needs. If insurance denies a stander, you may be able to borrow one from a state lending program, or purchase one used through an equipment exchange or another parent.

In order for you to get your stander covered by insurance or Medicaid, you may need to write a comprehensive appeal statement describing the medical benefits of a stander. It is always extremely helpful to cite actual studies that have presented scientific evidence on the benefits of standing. One helpful resource is the company EasyStand, whose website includes both information on funding standers and research on standing.

It is also best to cite a cost/benefit analysis that is specific to your child. In other words, the cost of the stander, while expensive, may ultimately save money by preventing costly hospitalizations and surgeries. Here is an example:

Jane’s orthopedist has already noted that she is beginning to develop contractures in her legs due to hamstring tightness. He has recommended she use a stander to prevent contractures in the legs by providing a gentle stretch to the hamstring muscles. If we are unable to improve her hamstring length, her physician has recommended surgery within the next six months, followed by intensive physical therapy after surgery. Enacting a standing program may prevent costly surgery and hospitalization, not only for her hamstrings, but in the future as well, since standing will likely minimize ankle, hip, and spine deformities. The cost of an upright stander, approximately $2000, is far less than the cost of surgery to release her hamstrings, which has been estimated at $10,000 to $30,000.

With appropriate assistance from your physical therapist, physician, and a well-written letter of appeal citing medical evidence, most families are able to obtain a stander for their children.