Skip to content
Non-Surgical Treatments for Spasticity in Cerebral Palsy and Similar Conditionsadmin2019-11-27T11:03:41-06:00

Non-Surgical Treatments for Spasticity in Cerebral Palsy and Similar Conditions

Note: This article is a revised version of an article originally published in 2008. 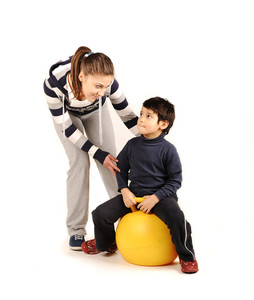 Children with cerebral palsy and other conditions that affect muscle tone often experience spasticity, which is a continued contraction of muscles. Often associated with high tone or hypertonicity, spasticity can eventually cause contractures or fixed, deformed joints and shortened tendons. Spasticity also limits movement, and can make walking, talking, or even just moving difficult or impossible for some children.

Spasticity is usually caused by the brain sending improper signals to the muscles, triggering them to contract or tighten continuously. It is not a problem with the muscles directly, but rather an issue with the central nervous system’s control of muscles. Symptoms of spasticity include high muscle tone and resultant stiffness, clonus (fast muscle contractions), muscle spasms, pain, shortened tendons, and deformed joints. While spasticity can affect any part of the body, in most children, the legs or arms are involved. Hips, ankles, knees, wrists, and elbows, along with thumbs and fingers in some children, may also be involved in children with cerebral palsy.

While spasticity affects the majority of children with cerebral palsy as well as children with other neurological or neuromuscular conditions, it can be prevented and treated to some degree. This article will evaluate non-surgical preventative methods and treatments that are commonly used to address spasticity and its consequences.

Stretching and Range of Motion

Stretching is the single greatest preventative when it comes to spasticity. Starting from birth, or whenever symptoms begin to emerge, children need to be stretched or have their muscles put through a complete range of motion. It is beyond the scope of this article to describe a complete stretching protocol, but your child’s physical therapist should be able to teach you how to stretch your child’s arms, legs, or other body parts on a daily basis.

While stretching may not eliminate high tone or spasticity, it keeps the tendons and joints from becoming fixed in place, preventing both surgery and painful contractures. But stretching must be done every day, and preferably more than once a day, to be effective. It can also be helpful to place your child in positioning equipment, such as a stander, that will continuously exert a gentle stretch on muscles while the child uses the equipment.

Some children find that taking a warm bath or having a gentle massage makes stretching a little bit easier. Others are able to stretch more when a vibrating massager is first placed on the muscles. Ideally, children should actively participate in stretching and range of motion exercises. Movement, while not necessarily eliminating spasticity, keeps the joints and tendons looser. Better control over muscles will emerge when stretching is done actively by the child.

Sometimes it can be hard to know where to start. We have found that the book and program Yoga for the Special Child, which teaches a series of gradually more difficult body postures and stretches, can help children and families to stretch in a fun and progressive way.

A second approach to prevention is bracing, splinting, or casting. Various types of braces, ranging from night splints to daytime braces or even casts, may be used to prevent contractures, increase range of motion, and reduce spasticity. The general principle is that bracing or casting repositions the affected body part correctly and exerts a continuous gentle stretch that may both normalize position, and, over time, inhibit reflexes that increase muscle tone.

Braces or splints are normally worn for only part of the day or night. Common braces include AFOs (ankle-foot orthoses) that are worn on the ankles, WHOs (wrist-hand orthoses), thumb splints, and elbow or knee immobilizers. Splints and braces need to be remade as a child grows or as her condition improves or worsens. Many splints are dynamic, meaning they move as the child moves, allowing the brace to support and correct the position while muscles and tendons strengthen and stretch. Other splints, such as night splints, are static and only position or stretch the muscles and tendons.

Serial casting employs a similar technique, but gradually stretches the muscle with a series of casts that are worn continuously. The affected body part is casted to provide a gentle stretch. After a week or two, the cast is removed and a new one is placed, stretching the muscles even further. The process is continued until a more normal range of motion is established. Some doctors prefer not to use serial casting since tendons and muscles tend to weaken while casted. Ask your doctor, as it may or may not be appropriate for your child.

There are several different medications available that can relax the muscles, reducing spasticity. These include Valium and other benzodiazapines, Baclofen, Dantrolene, and Zanaflex, among others.

A small dose of Valium (diazepam) or another benzodiazapine such as Ativan (lorazepam) or Klonopin (clonazapam) is often used to relax the muscles. Unfortunately, these medications relax all muscles, so children with mixed tone — such as high tone in their extremities and low tone in their trunk — often lose head or trunk control. In addition, these medications have a sedating effect, and may cause sleepiness and altered cognitive abilities. Benzodiazepines are very addictive, and children may go through withdrawal when the medication is stopped or develop tolerance to the medication.

Baclofen is probably the most widely used medication for spasticity. It is a muscle relaxant that reduces muscle spasms and high tone throughout the body. Like benzodiazapines, however, it tends to reduce muscle tone throughout the body, and may reduce head/trunk control or affect balance. It is also somewhat sedating, though this effect sometimes improves over time. Caution must be used in children with seizures since Baclofen can increase seizure activity in some children. In addition, the dose must be gradually increased or withdrawn to avoid serious withdrawal symptoms. Children who have good success with oral Baclofen but who have extensive side effects may benefit from having an intrathecal Baclofen pump surgically implanted in their bodies.

Dantrolene (Dantrium) is another muscle relaxant that works differently in that it acts directly on muscles, eliminating some of the sedating side effects common with other medications. It may still cause drowsiness, an increase in seizures, and decreased muscle tone throughout the body. In addition, it can in rare cases cause serious liver side effects, so blood tests to monitor liver function are necessary while taking the medication.

Zanaflex (tizanidine) is another muscle relaxant that works on the central nervous system. Like the other medications, relaxation of all muscles often occurs, meaning a loss of head/trunk control or difficulty with balance and walking may be seen. Side effects include drowsiness, a drop in blood pressure, and, occasionally, an increase in liver function values.

For children with high muscle tone in specific locations, Botox injections can be used to target specific muscles and reduce the muscle tone in that region of the body. Its major asset is the ability to be used directly in affected muscles, thereby treating spasticity directly without any systemic effects or side effects.

Botox is Botulinum toxin type A, a highly poisonous and neurotoxic protein produced by the bacterium Clostridium botulinum. Other formulations are also used occasionally. In large quantities, this bacterium causes botulism.

Very minute quantities of Botox are administered in children with spasticity. The tight muscle is located and the Botox is directly injected into the muscle, causing temporary paralysis (usually three to six months) of the muscle. Typically, multiple injections are given in different sites to treat various spastic muscles.

The most important thing to know about Botox is that it MUST be given by an experienced doctor who knows the appropriate quantity to administer and which muscles to inject. If it is given in the wrong muscle, that muscle will remain paralyzed for several months, possibly affecting function. If the doctor targets too many muscles in the same region (such as both the biceps and the triceps), the child may lose all functional ability in the body part since all the major muscles are paralyzed. If too much is given, the body may stop responding to it or the Botox may spread beyond the injection site.

Results, which are usually seen within three to five days after injections, should lessen spasticity slightly. Injections need to be repeated every three to six months. After injections, children are often braced, casted, or stretched to try to maintain the additional range of motion provided by the Botox. Some children, and especially young children, may permanently retain some of the effects.

Administering Botox is similar to receiving a vaccine injection. Injections can be somewhat painful, and it is common to use a numbing spray on each site before injecting. Some doctors also may use ultrasound or other techniques to help locate small muscles. It is common to have some localized bruising or redness from the injections.

Botox may have caused a small number of deaths in children with cerebral palsy who had underlying respiratory issues. The speculated mechanism is that the Botox toxin spread far from the injection site, causing botulism and paralysis of the respiratory muscles. This has always been a slight risk of Botox, which is less likely to occur with an experienced practitioner who typically uses smaller doses. Children should be monitored for several days after injections for difficulty swallowing or respiratory distress, as treatments are available.

Botox, nonetheless, is one of the most effective treatments for spasticity and, when used correctly, should be safe and effective for most children.

Most children end up combining many of these therapies. It is common for a child to take an oral medication, receive Botox injections, participate in physical therapy, and wear braces simultaneously.

By starting early with these various spasticity interventions, the need for orthopedic surgery may be prevented or lessened. Spasticity should be treated aggressively, before its complications begin to create additional medical problems for children.