When Your Child Cannot Have “Real” Food

When my daughter, Charlie, was two weeks old, we knew she would not be able to feed orally. She suffered a global brain injury from lack of oxygen in the womb, and no longer had a swallow reflex. She had been fed by NG-tube from birth, and when we had to discuss the surgery to place a G-tube, one of the first things I asked was, “Will we be able to blend food and feed her that instead of formula?” 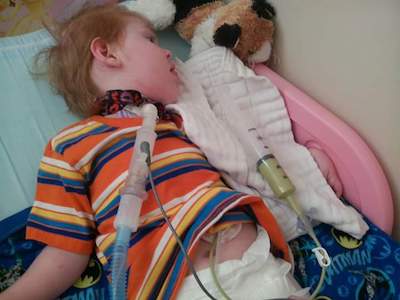 The doctor said absolutely. He told me that once she was old enough, we could feed her blended food in addition to breastmilk or formula, and eventually feed her a fully blended diet. I was very passionate about providing my children with breastmilk (my son nursed for several years, and Charlie received pumped breastmilk by tube for nearly a year), so it really eased my fears, knowing I could continue to give her “natural” food. I knew formula was a valid option, but I wanted nothing to do with it. I saw it as “lesser than.”

When Charlie was about eight months old, I started really struggling with milk production. I tried eating oatmeal and drinking mother’s milk tea, along with marathon pumping sessions, but my supply dwindled to basically nothing. I tried to supplement with goat’s milk, but Charlie vomited it consistently, so I bought a can of formula for the first time ever. I grieved losing my milk supply, but I had enough frozen milk to feed her a few ounces a day for another couple of months, so I didn’t take it too badly. It did take a few tries to find a formula she accepted, but once we did, she started puking even less than she did with breastmilk.

I knew she still needed formula primarily at her age, but I started researching blended food diets, and got to work. My attempts at feeding her were disastrous, even with mild, easy-to-digest foods. Even an ounce of baby food made her vomit. I decided to try again when she was older.

I tried again around a year, then again around twenty months, and yet another time after her second birthday. She simply could not tolerate any foods. And not only that, but her vomiting issues became so severe, we opted to put in a GJ-tube and feed her directly into her intestine through the J-port.

I gave up on the idea of a blended food diet until she was about five. I tried again and surprisingly she did really well with it! She would vomit a little because I was feeding into her stomach through the G-port, but it wasn’t enough to be concerning. I was so excited to FINALLY be feeding her food I had made myself!

But then she started losing weight. I increased her calories multiple times, but she simply wasn’t growing. When I got her blend to the point that it was nearly double the calories I was feeding her in formula into her J-port, I had to admit to myself that there was a problem. I considered trying blended food through her J-port, but I was concerned that it wouldn’t be healthy because of absorption and clogging issues. So I never considered that a valid option, and I still don’t, because there is no evidence it is safe at this time. But I hated the idea of resorting to formula.

Since Charlie had been tolerating the food through her G-port, I wasn’t sure what to do when her GJ-tube accidentally got pulled out one day. I agonized over whether to get it put back in. I was really struggling with guilt over the whole thing. One day it finally dawned on me that I should just ASK MY KID. She is severely brain damaged, but somehow her cognition wasn’t affected much. She’s been able to answer yes/no questions since she was very young, by raising and lowering her hands. So I explained the options to her and she chose the GJ-tube.

I took her to get it put back in the next day. We were back to formula and I was back to feeling guilty, but Charlie was happy, healthy, and growing.

Around this time period, I was diagnosed with ulcerative colitis and GERD. I would find out later that I also have gastroparesis. I was a mess and “real” food (even smoothies!) was causing so much nausea and pain that I cracked open some of Charlie’s formula, added some Nesquik, and drank it.

It was a relief to finally have something in my stomach that didn’t hurt and didn’t come back up. Since I’d been feeding Charlie blended food, we had a stockpile of formula, and at a certain point, I lived mostly off of that for more than a month. It would take years to finally sort out my medical issues, but I always had formula to fall back on, and for that, I was thankful.

I changed my stance on formula after that. It’s not less healthy than “real” food, just different. And different people have different needs.

Charlie is 11 years old now. She still has her GJ-tube, plus a trach and vent. She is amazingly healthy, and not just considering her condition. It has been nearly six years since she’s been hospitalized for any illness. She’s had two ER visits in that time, one as a precaution because her pupils were unevenly dilated, the other for a UTI. She’s had no sick visits otherwise.

She’s had no stomach or feeding issues, no pneumonia from reflux, and no respiratory concerns at all. Her health was greatly improved by the placement of her trach, which I had put off for years because I didn’t want to medicalize her care so much. This was the same mindset that made me feel guilty for using formula. But sometimes medical intervention is best, whether it’s adding a device or using food that was concocted in a lab. Do what is best for YOUR child.

If I have another child, I’ll still choose to nurse, no doubt, but I won’t stress if I have to use formula. I believe many, many people with feeding tubes can benefit from blended food, and it’s definitely an option that should be considered.

Shauna is a cake decorator and mom of two children with special needs from Central Ohio.