The Daily Poop…Life with a Colostomy

This article will address the topic of GI issues, especially colostomies. There are a lot of different GI issues that we experience at our home, as my son has dealt with belly struggles all of his young life. I have churned (no pun intended; OK, maybe a little) thought after thought in my head and recalled surgery and admission one after another to try to speak to the amazingness of my son.

My son Graydon is a miracle child. He has a rare syndrome, and quite frankly was never expected to survive outside of the womb. His internal complexities began in utero. After delivery, the doctors found a kink in his bowels, and at day two of life he had to have a colostomy surgery. After one month in the NICU, it had to be revised.

When the doctors were performing the initial surgery, they found that my son’s organs were malrotated. This prompted removal of his appendix because he would have been misdiagnosed later on if he presented with symptoms of appendicitis since that organ was residing on the wrong side of his body!

He remained in the NICU for four months. During those days, he was fed by total parenteral nutrition (TPN or IV nutrition) and also by NG (nasogastric) tube. He had failure to thrive for most of the time there. Sometimes the NG-tube would come out of his mouth and totally mess me up emotionally for a few minutes. He struggled to take a bottle because he had holes in his heart, and was easily worn out before he could drink it all. After open heart surgery at eight months old, he received a G-tube placement.

His doctors say he developed severe oral aversion, and that is the reason he refuses take anything by mouth. I imagine, and we all believe, that it has been from all the intubations and negative traumas to the mouth that he has lived through. Anything coming at the mouth is not a positive thing for him. At nine years old, he is still at 0% with oral feeding. And you know what, it is OK.

How a Colostomy Works

Some folks don’t understand the dynamics of a colostomy, so I will tell you. My son poops out of his belly from a hole that is actually part of his intestine hanging out. We cover it with a little bag and empty the bag when it is full. He still pees normally, even though at nine years old we are still struggling with incontinence. Most days, that is the least of my concerns. His pull ups are “Hulk” for crying out loud…he may never want to switch out of those.

Graydon’s colostomy bag lies directly below his G-tube. The big frustration there is that when his bag leaks poop, it gets on or around the tubing. Lots of laundry at this house! Better believe it. 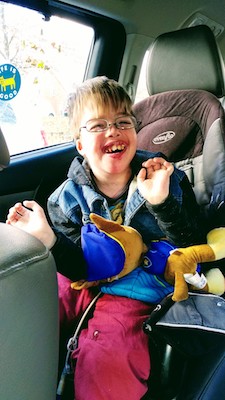 We have dealt with the offensive behaviors of people when his bag busts and it smells. We have been questioned repeatedly on why he isn’t potty-trained yet since cognitively he is aware. There was even a time when he had Lysol sprayed at him!!

I always have wipes on hand so I can burp my sons bag since it sometimes fills up with gassy air. My kids particularly love it when I do it in the van before picking them up at school. My husband is amused by doing it when someone who has hurt our feelings in the past is in the near vicinity.

All the while, Graydon has no idea what the big deal is. I love the joy that he exudes. I should strive for that more in my daily walk. Maybe I will try, while I am administering milk with the feeding pump and dumping poop from the bag!

As a mom, I find that most people can identify with one GI issue or another, but usually not as many as we have. Graydon has 14 medical conditions and his latest internal drama has been gallbladder attacks. We are trying to manage symptoms and not bite the bullet on surgery. Too much scar tissue, and quite frankly, he has medically induced PTSD.

So, in conclusion, each person is so unique. Not one person will share the same story, no matter the diagnosis. And as a mother to an amazing fella, I may be the slightest bit protective. Just know that, and respect that. But, I guess the take away from our story is to be kind because you may need your own colostomy bag burped one day!

Heather Amos is author of the book I’m Not OK, and parent of a child who is medically fragile with special needs in central KY.