Deciding on a G-Tube for an Older Child 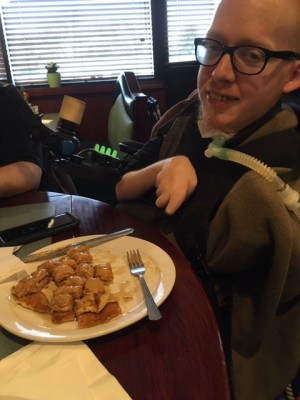 One of the hardest decisions I was forced to make as a special needs parent was whether or not to get my son Adam a G-tube. According to Kidshealth, “A gastrostomy tube (also called a G-tube) is a tube inserted through the abdomen that delivers nutrition directly to the stomach. It’s one of the ways doctors can make sure kids who have trouble eating get the fluid and calories they need to grow.”

For years, doctors had been saying that my son with Spinal Muscular Atrophy needed to have G-tube surgery. Adam was adamant that he didn’t want to have this surgery. At age fourteen, I felt obligated to honor his wishes. It was his body and he should have some say about what surgeries he has.

The problem was that he was very underweight. He was 35 pounds, and no matter what we did, he couldn’t seem to gain weight. I spent years arguing with him about eating. I could mentally tell you the calories in everything he ate. My brain automatically calculated every calorie to make sure he was getting a minimum of 1000 calories every day.

Every meal was a battle. He would be full after four to five bites and I would spend every meal saying EAT, EAT, EAT. He would always say, I’M FULL. This went on for years and years.

The older Adam got, he seemed to get sicker and sicker. He just wasn’t gaining enough weight to fight off illness. When he got sick, he would be in the hospital for weeks. He would always lose weight, and then we were back to fighting to gain back all the lost weight.

Each hospitalization, he would have to have a nasogastric tube (NG-tube) placed in order to receive nutrition while he was too weak to eat by mouth. Since he had severe scoliosis, it was very hard to get an NG-tube down his throat. It was now requiring a GI doc to come in and guide the NG-tube down his throat and manually thread it. It took a great deal of sedation, and it was incredibly painful to watch as a parent. It was also hard to get him back to eating by mouth because they didn’t want to remove the NG-tube until they were sure he was eating enough by mouth, but he didn’t want to eat by mouth because the NG-tube was making it hard to swallow.

Improvements with the G-Tube

Adam spent his 16th birthday in the hospital. This time, he couldn’t seem to recover. The doctors said that he needed a tracheostomy and a G-tube. The decision was made, as he he was too sick to have a say in it. Within days, he had his G-tube surgery and was on the road to recovery.

Adam’s biggest worry was that he wouldn’t be able to eat by mouth with a G-tube. A swallow study confirmed that it was safe for him to continue to try to eat by mouth. He was getting the majority of his nutritional needs met by the enteral formula that went into his G-tube, but now instead of constantly nagging him to eat, I could let him eat what he enjoyed in the amounts he could handle.

It didn’t take long for him to start gaining weight. Within a short period of time, Adam had gained enough weight and was able to eat by mouth most of the day. He was soon getting two cans of formula by G-tube overnight and eating by mouth during the day.

That first year he doubled his weight. He was having fewer episodes of illnesses. He had plenty of energy to get through his day. The best thing was that we no longer had to argue over eating. Eating was a pleasure for everyone instead of an ordeal. Much like the breast versus bottle debate, it’s not how the food gets into your child — the most important thing is getting your child fed.

Adam just turned 25 years old. He has had his G-tube for nine years. He is now down to just three cans of formula a week, and is able to eat most of his calories by mouth. We are working with his doctors to see if he can maintain his weight and possibly remove his G-tube. So far he has managed to gain weight each time we have reduced his formula.

While many parents and kids are afraid to get a G-tube, it can truly be a gift, especially for kids who are able to eat some, but not enough, by mouth.

Kimberly Sullivan is the CEO of the Sullivan Family where she manages her husband, son, nurses, and two dogs. Her hobbies include sleeping and chocolate. She details her experiences as the mother of a son with Spinal Muscular Atrophy on her blog, Please Don’t Pet the Special People at ksully357.blogspot.com.