My daughter Alaina has a seizure disorder with seizures that cause severe nausea. This is her story. 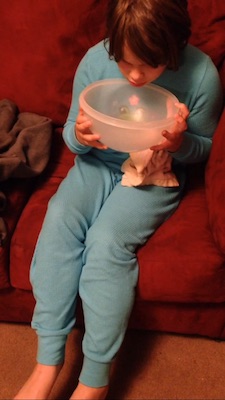 Our daughter’s first witnessed seizure was when she was five years old and was what you would expect: convulsions with all four limbs shaking, her body jerking rhythmically, saliva running from her mouth, eyes rolled back in her head. It lasted over an hour and was a scary introduction into the world of epilepsy. Alaina’s next seizure was much longer and catastrophic, causing massive brain damage to her left hemisphere.

Once she started a low dose of Keppra we did not see another convulsive attack for several years. One doctor guessed the focal point had burned out after the many hours of seizing. Who knew? We were just thrilled to make it through an entire year with seizure freedom. We started talking about weaning the Keppra with her neurologist when she turned seven.

Around that time Alaina started experiencing brief bouts of sudden and intense nausea. She was so certain she was going to vomit that every single time she would ask for a bowl or stand over the sink or toilet. Thankfully, these episodes were short and within a minute or two she would tell us, “All gone.”

At her next well-child visit I brought up my concerns about these unusual episodes. We joked about Alaina’s dad having a weak stomach and our doctor gave some possible reasons, but no solutions. The next time we saw her neurologist, I again brought up the episodes or “nauseas” as we had begun to call them. Shrugged shoulders and no suggestions were the response. I even asked her physical and occupational therapists. They had seen the mysterious spells firsthand and were sympathetic but also clueless.

Nausea as a Seizure Symptom

One day we had an appointment with Alaina’s physiatrist for routine Botox injections into her spastic muscles. I again brought up the nausea episodes and as I was explaining how they would come on suddenly, last one or two minutes and often came in clusters it hit me — I was describing seizures! 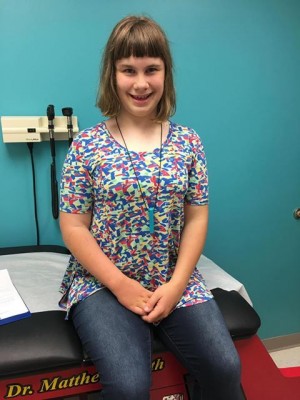 I grabbed my phone and started searching for information about nausea and seizures. Sure enough, they do exist and are called abdominal auras or autonomic seizures. These particular events are labeled as simple partial seizures, since the person doesn’t lose consciousness and can often talk through the episode. We began working with her neurologist who thought my hunch could be correct. He suggested increasing her Keppra dosage to see if it would decrease the frequency of these episodes. It didn’t.

After that, even though the idea they could be seizures was somewhat accepted, no one seemed to take these events very seriously, even joking if they were actually seizures, they certainly weren’t causing any harm.

The Impact on Quality of Life

The nauseas became so frequent that I began keeping a vomit bag in my purse, and Alaina would often carry a bowl around the house. Even though she never did actually throw up, every time she was convinced that she was going to and insisted she have something ready to catch the vomit. Sometimes Alaina would choose to stay home from outings because she feared the nauseas. They began to occur more frequently and she became more fearful. We all did our best to cope with them and get used to our new normal, but her quality of life suffered.

One day everything changed. Alaina had a nausea episode that appeared like it was going to end as it normally would. She was on her way to spend the night at Grandma’s house. About an hour later Grandma called to tell me Alaina had thrown up twice, but we just assumed she was the next victim of the stomach bug currently circulating our house. A few minutes later Grandma texted and said Alaina wanted to come home, which was completely unlike her.

When they arrived, I instantly knew something was wrong just by looking at Alaina’s face. She was confused and walking aimlessly. When my husband John asked her name or how old she was she gave odd answers. We immediately phoned the neurologist on call and waited to hear back. In the meantime, Alaina began turning her head sharply to the right like she was looking for something over her shoulder. Her eyes also started darting back and forth. We just didn’t know what to make of it because she was still conscious and sitting upright, no convulsions or jerking. I called the neurologist’s office again and told them it was urgent. By the time they called back, we were loading Alaina into John’s car to head for the Emergency Room. Once we arrived, she began vomiting again and then her right side started twitching, eventually morphing into full body convulsions. 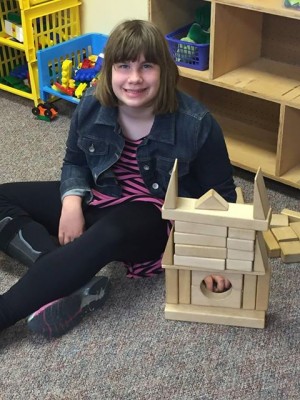 Thankfully, the ER staff was able to get the seizure stopped with some powerful medications. It had lasted over two hours by the time we got treatment.

After that scary night, her nausea episodes increased with a vengeance. She would have 50 a day on her worst days. Eventually, another medication was prescribed, and we entered a new realm of intractable or drug-resistant epilepsy. We now had proof that her nausea spells were actually seizures, and her neurology team began to take them a little more seriously.

I wish I could say the same for the ER doctors. We were often made to feel quite foolish for bringing in a child whose only symptom was an hour-long bout of nausea. So many of them believed there had to be a loss of or an altered state of consciousness in order for it to be a real seizure. Even neurologists on call would tell the ER doctors that nothing could be hurting her as long as she didn’t have an altered state of consciousness. We were repeatedly given Zofran and sent home.

Eventually we were connected with a wonderful epileptologist, a neurologist whose specialization is epilepsy, who truly understood the situation and how damaging these constant seizures were to Alaina’s brain. She helped guide us through an epilepsy surgical evaluation three years ago. The team decided Alaina’s best chance at beating epilepsy was to fully disconnect her left hemisphere from the right and remove the most damaged tissue. Our daughter had her hemispherotomy surgery in 2016 and has enjoyed 2.5 years of seizure (and nausea!) freedom.

Sonja Woods is married to husband, John and is thankful to be a stay at home mother of six. The family lives in Lindsborg, KS.