Note: This is an updated version of an article originally published in 2009.

As an infant, my daughter cried a lot. That’s putting it mildly. To be more honest, she screamed nonstop, day after day, for a full year. I’m not talking about a little bit of colic. I’m talking about screaming at the top of her lungs eight hours a day, every day. She only stopped to vomit or sleep.

Like many newborns who suffer profound brain injuries from hypoxic ischemic encephalopathy, my daughter was diagnosed with “neuro-crying” or “neuro-irritability.” These terms can be defined as crying, agitation, or irritability in children with known neurological issues.

My husband and I, however, were convinced she was in pain.

In the past, doctors often explained crying and irritability in children with neurological impairments as an effect of an immature or underdeveloped nervous system. In layman’s terms, the brain simply cannot cope with life. All babies struggle with this to some degree, since the transition from the womb to the world is quite dramatic. Babies have not yet developed the ability to soothe themselves or deal with all the stimuli (sounds, movement, lights) around them. Many physicians postulate that this process must be even more difficult for infants with neurological impairments, leading to an increase in the duration and intensity of crying in these infants.

It’s a good theory, but one that really has very little evidence to support it. Yes, the nervous system may be immature or damaged, but that does not necessarily prove causation. In other words, it is perfectly plausible for an infant to have both an immature nervous system and intensive prolonged crying, without one necessarily causing the other.

Many liken crying and irritability in newborns with neurological impairments to an extreme form of colic. While we don’t know the cause of colic, it has been potentially linked to gut bacteria overgrowth, underdeveloped digestive tracts, food allergies or intolerances, and even migraines. Many of these theories suggest that colic is not in the brain but in the belly. These new developments in the theory of colic suggest that “neuro-crying” may also not be entirely neurological.

One observation I made is that the sounds of cries made by babies with neurological impairments tend to be different than those made by typically-developing babies. This is documented in the medical literature, especially in the work of Katarina Michelsson, who first determined that babies with birth asphyxia had much higher pitched cries as compared to their counterparts.1

A baby with neurological impairment may have a fussy cry that sounds like a shrill pain cry in a typical newborn, because all her cries may be higher-pitched and more shrill than those of a typical infant. It may be difficult for physicians to distinguish between a shrill high-pitched cry representing fussiness and an even higher shrill cry representing pain. Doctors, therefore, may not recognize a pain cry in a child with a neurological impairment, leading them to not treat the baby as if she has pain.

Parents, however, often learn to distinguish these cries, especially when they see the cries connected to things babies find bothersome. Every involved parent will learn, for example, what a baby’s “I’m wet” cry sounds like, or what a pain cry sounds like. Parents will learn what cry means you need to feed the baby, and what cry means a trip to the doctor for the baby’s ears to be checked.

In the case of my daughter, her crying spells seemed inextricably connected to her gastrointestinal tract. We could see her stomach and intestines contracting violently much of the time she cried. The crying would intensify before and after vomiting and retching, which occurred a good 15 to 20 times a day. While my daughter’s discomfort seemed connected to her upper digestive tract, other parents have shared that they noted similar patterns associated with their child’s stooling patterns and gas production.

Another thing I noticed is that the only time my daughter stopped crying while awake was when she was put in her stander. Getting her in a full upright position seemed to lessen her reflux and gagging, which helped to slow the retching and vomiting. It was the only time we had peace.

A Year of Crying

I brought up my theory that my daughter’s crying was linked to her gastrointestinal tract time and time again with both her GI and neurologist. While her GI did increase her reflux medications, neither doctor really took my theory too seriously. They thought it was neurological irritability, and that she would just have to outgrow it. 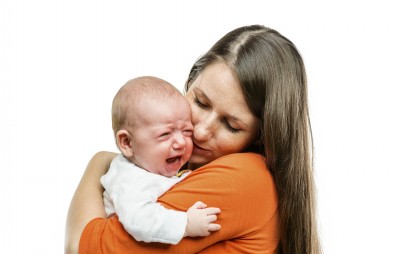 My theory was enhanced when at six months of age she received a gastrostomy feeding tube (G-tube). The surgery put her gut into overdrive, with greatly increased discomfort, more vomiting, and more crying. It seemed obvious to me that her gut was causing her great pain.

For many months we continued with the same old treatment, waiting for her nervous system to mature in hopes that she would outgrow her irritability. It never happened.

The difference was dramatic. My daughter changed from a screaming, inconsolable, vomiting disaster to a happy, smiling toddler. Her vomiting was reduced to only a few times a day. Her crying virtually disappeared.

Then the guilt set in. For an entire year, my child screamed and vomited in utter agony. This was not an under-developed nervous system. This was true pain.

Several studies have supported what I knew all along. In a series of case reports by Julie M. Hauer, Beverly S. Wical, and Lawrence Charnas, children of all ages with neurological impairment and unexplained irritability were given Gabapentin.2 All nine children demonstrated dramatic improvement in crying, comfort levels, sleep, and feeding tolerance.

These authors postulate that visceral hyperalgesia, or an over-sensitive gastrointestinal tract, was the cause of pain in these children. In short, children with neurological impairments often perceive functions of the gut, such as the contractions of digestion, formula in the gut, or stool in the bowel, as painful. This is likely due to sensitization of the gastrointestinal tract that may be caused, in part, by repeated uncomfortable experiences in the gut, including reflux, constipation, gastrostomy placement, and other gut surgeries. In some children, underlying damage to their nervous systems may also make it more likely for them to experience more neuropathic or visceral pain.

When my daughter was three, she became much sicker as a result of an enterovirus, pancreatitis, and sepsis. She was diagnosed with post-illness visceral hyperalgesia. In her case, it was extremely profound, perhaps due to untreated pain from the pancreatitis, and she could not even tolerate small amounts of formula into her gut any longer. As I began to research the subject, I reflected even more on her first year of life. It became clear that she had struggled with visceral hyperalgesia from about her seventh week of life, which, incidentally, corresponded with her first surgery on her gut for pyloric stenosis. It worsened dramatically after her second gut surgery to place her gastrostomy tube, a procedure that caused several months of pain, vomiting, and agony before she recovered.

When the study on Gabapentin cited above was released, I finally felt that what I had known all along was true: my daughter had severe unrecognized pain for her entire first year of life that could have been treated. I don’t blame her doctors since there was little research to support what I as a mother perceived. But I wish that I could have pushed a little harder to get her on appropriate medication a little earlier.

Parents often know what is happening medically with their children long before scientific research and evidence catches up and proves them right. Sometimes it can be very difficult to convince doctors to try a treatment when there is little research supporting it. After all, you are just a parent with no medical training, and many doctors are not big on a mother’s intuition as a diagnostic test. Nonetheless, it is vital to persist, especially when pain is involved.

I hope that by sharing this story that other infants diagnosed as having “neuro-irritability” can receive treatment for pain. I would hate for any other child to have to go through what my daughter did, especially when there are good treatments available.