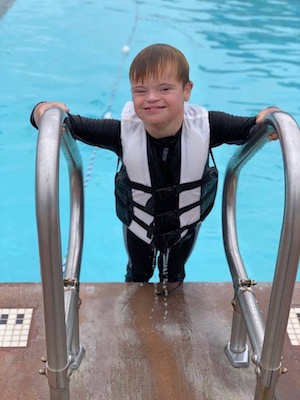 Four years ago my wife and I made the decision to stop feeding therapy and accept that our now eleven-year-old son Bobby would eat via G-tube for the rest of his life. Our decision was primarily based on the fact that Bobby’s oral aversions made feeding therapy a constant struggle. The trauma we were causing him by pushing oral feeding outweighed any concerns we had about keeping the G-tube. Four years in, we are even more convinced that we did the right thing.

Bobby has Down syndrome. Many children with his diagnosis have oral sensory issues and only consume a limited number of food items. Meeting protein or vegetable requirements can be difficult in some cases. Because Bobby has other medical problems, most notably a congenital heart defect and liver disease, being able to provide him with a balanced diet has been key to maintaining his overall health.

Adolescents with Down syndrome are also prone to obesity. At the age of ten, Bobby’s metabolism slowed down and he began gaining body mass even though his calorie intake was stable and he was growing steadily. We were able to decrease his calories without causing him any distress, and he now is at a healthy weight.

When we first made the decision to keep Bobby on a G-tube, one of our major concerns was that it tied him to a nurse when he participated in activities outside our house.

As Bobby gets older, we realize that over the long haul the G-tube will allow for complete independence relative to eating. Preparing the Elecare is as simple as counting scoops into a bottle and mixing with water. We have used Occupational Therapy time to teach him how to hook up an extension tube to the Mic-Key button style feeding tube he uses. He takes his feeds by gravity so there is no pump to master. I expect that he will be completely independent by the time he’s in high school, something that wouldn’t likely be the case if he needed to learn to cook.

The most unexpected benefit of our decision to stop feeding therapy was that Bobby became curious about eating food orally. Once the pressure was removed, he began to experiment, first by taking small bites of soft food like hummus and mashed potatoes, and now moving on to a larger variety of easily manipulated foods. We even started feeding therapy again, with the strict parameter that Bobby decides what and how much he would eat.

He still doesn’t take in significant calories (less than 50 a day). He shows no inclination to move beyond his current level of eating. But his new receptiveness to oral eating does allow him to take part in the social aspect of meals. He loves getting a tray lunch at school, especially on bean and cheese burrito day!

We still run into people, including doctors, who are concerned about our decision. Generally, these people do not doubt the health benefits of the G-tube feeds, but are concerned that we are depriving Bobby by not letting him experience the pleasure of good food.

I get it. I love a wide variety of foods and it would be a loss for me to have to move to a diet of Elecare along with a few tastes of table food. But it’s different for Bobby. He’s been tube fed since he was one month old. He associates a gravity bag and IV pole with the comfort of mealtime. Oral eating, while finally pleasurable, has never been a source of sustenance for him.

Objections from others no longer bother me because by removing pressure on Bobby to eat orally, we’ve been able to place his eating decision firmly in his hands. When he wanted to explore soft foods, we supported him both by providing a variety of choices and by seeking help from an Occupational Therapist to make sure he was eating safely. He now gets a lot of enjoyment sampling foods at mealtime but shows no desire to learn how to eat enough to replace his Elecare feeds. Giving him the control has liberated me from any feelings of guilt. We’re all happy with how things work.