A Disability System Designed for Defeat 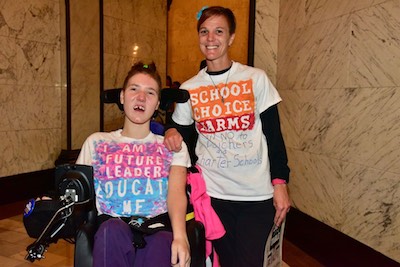 As the mother and sole caretaker of a 21-year-old woman living with Cerebral Palsy, I have experienced almost every emotion imaginable, as well as far too many I couldn’t even imagine in my most horrid nightmares. You see, this roller coaster ride is quite faulty and often gets stuck upside down at the top of a loop, leaving me dangling by a lap belt that really needs to be tighter. As the blood rushes to my head and begins to pound, I can see the firefighters in the distance — even hear their sirens — yet, they seem to be moving backward. My hope plummets to the ground and I must accept that I either need to find my way to safety or drop.

Free falling to rest — oh how great that sounds — but I can’t drop! Who will care for my daughter Ms. Haley? What exactly would she do? Every experience we’ve had has shown us that what we are dealing with is a systematic issue, and the system always seems to try to defeat us.

Feeling defeated is perhaps the most depressing emotion I have ever had, and I’ve watched my daughter lay on her deathbed on more than one occasion. I’ve found the only way I can cope is to accept the fact that what Ms. Haley and all people living with disabilities are dealing with is a system that deems them insignificant. Like all systemic issues, nothing ever changes except the façade.

Haley’s early years were tough, but back then we had so much hope. I was fortunate that our circle included early intervention folks, therapists, professional advocates, and social workers who taught us what we needed to know. I remember being taught my child’s rights, as well as federal/state mandates that ensured them, such as the Americans with Disabilities Act (ADA) and the Individuals with Disabilities Education Act (IDEA).

The feeling of, “Go ahead and try to mess with my daughter…I dare you!” floated around my head. Confidence was instilled in me because I had both the facts and proof of my daughter’s rights.

I also remember the very first time this confidence disappeared as discrimination waved its magic wand. I took Haley her sister to get a haircut but they refused to cut Ms. Haley’s hair. I mentioned the ADA and the lady was like, “What’s that?” As my jaw hit my shoe, I lost my confidence and was consumed by anger. I lost my temper, and started jumping, screaming, and spitting. I later called the corporate office and informed them what happened, and Ms. Haley was offered a free haircut and assurance she could get her hair cut while sitting in her wheelchair. I had made my point and raised awareness that they were supposed to offer accommodations.

I was still angry and there was absolutely no shaking it.  Discrimination was supposed to be a thing of the past. Of course that’s not what I saw with my own eyes, but it’s what I was taught in school. I think this was the first time I realized exactly how difficult society would make my daughter’s life.

The school system led to more episodes of discrimination. In middle school we had to file a civil rights violation through a disability rights group due to the school being inaccessible. Sadly, they didn’t actually started making physical changes to the building until the year Ms. Haley moved to the upper class school.

We packed up and moved to the neighboring city, but Ms. Haley’s cognitive skills spiraled downward due to health complications, and she had a ruling change deeming her unable to learn. Now Ms. Haley does suffer from a slight cognitive delay, but she has never been non-learning! I was so livid I pulled her out of the school system completely.

I put her back in school in a new district as a freshman. Things started well, only she had been so far left behind that when she wanted to get her diploma, she was overwhelmed with the amount of work and classes she had to complete. After 18 years in the public school system she rolled away with a mere certificate. I find I’m not surprised, just sad. Sad not only for the experience my daughter has had but sad for every future potential leader. The system sets our kids up to fail!

As Ms. Haley grew, the obstacles placed in her way became more and more apparent. Ms. Haley is 21 now and no longer a child. I found it important to ensure Ms. Haley knew her rights at a young age so she knows she matters. However, knowing your rights and having your rights honored have proven to be two completely different things.

I have always told her not to let her disability define her; yet, every aspect of her life is centered on her disability. Every time we leave the house, we think, will it be a mountain or an anthill in our way today? There isn’t a day that goes by that inaccessibility doesn’t affect her or most people living with disabilities.

This is supposed to be the time she leaves the nest and begins her life on her terms. She’s been working all these years toward independence and getting to escape her overprotective mother.

Only she doesn’t. Like hundreds of thousands of Americans living with disabilities, she’s on a waiting list to receive waiver services. Well, she’s supposed to be, anyway, as twice now her name has disappeared from the list. After getting her back on, I was informed there was a six-year wait on the waiting list. Tears streamed down my face as I told the lady my back didn’t have six more years of lifting. What were we supposed to do?

How many folks exactly get lost in this waiting period for services they need to survive?

These services are supposed to give her access to living independently — if she receives them in her lifetime. I find myself wondering exactly how much these services will in fact help, since as of right now they are centered on institutions keeping folks living with disabilities out of sight and out of mind while the state fills their pockets. I can only imagine how this makes Ms. Haley feel, but as her mom I can tell you despair is what I feel.

For 21 years now I’ve experienced how this system works, and the obstacles folks must overcome just to apply for basic programs do not surprise me. I’m almost certain it’s set up this way to discourage us so we just quit.

I feel defeated as everything I have taught my daughter about her rights feels like a lie. Like the rescue team driving in reverse, there’s no one coming to help. I’m ready to drop from the broken carnival ride, only I can’t do that to Ms. Haley. I must do everything I can to protect her from this defeat.

Have I done nothing more than given her false hope? How will living an independent life be possible when there’s no one in your corner? Still, I encourage her to raise her voice and continue to fight because she does matter, as do all people living with disabilities.

I put on my activist face and letter-writing hat and get to work. I send letter after letter with little to no response. I tell her things like this appeal will get her closer to actually being approved, only I don’t believe it. I tell her she won’t always have to live with me, but it’s probably going to be her and me until the end.

Am I anything more than a liar? This is not how I planned to parent my first-born daughter or the life I wanted for her. I wanted to empower her and stand beside her while making her goals and dreams a reality. Is this reality anything other than a dream? I feel like I have failed, not due to a lack of unconditional love and support, but because the system is designed for defeat.